Sizes of various IBJJF Tournaments: Guide to Choosing Your Next Tournament 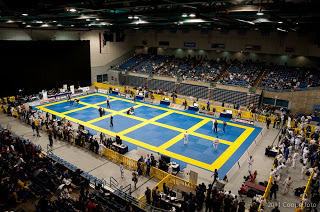 There is no denying the fact that IBJJF tournaments are the most prestigious ones. There are many local tournaments around but very few have the attractive power as the IBJJF ones. This following article compares the size of each of the IBJJF tourneys:

“Having just competed at Worlds in a division of 126 guys, I started to look ahead at what and when the next “big” IBJJF tournament is. I looked at Boston, Chicago, etc, and quickly realized that they are an order of magnitude smaller than the Mundials. So I decided to measure the relative size of the major IBJJF tournaments I’m aware of by what size the blue belt middleweight division was in 2011 for that tournament. This is usually one of the biggest (and often the biggest) division of the tournament. So I figured that it would serve as a decent measuring stick.

When considering whether to do a tournament, I’ll often just look at the next one, and decide based on how I’m feeling. But after doing the little research I mentioned above, it’s clear that it’s smarter to plan ahead to make sure that the division is big enough to justify the costs of travel.

So here’s the results. Below are the major IBJJF tournaments and in parentheses is the number of people that competed in the blue belt middleweight division for that tournament.

From the above “results”, I draw several conclusions:

I will not be going to Boston this year, lol. Come on, Bostonians, get your s*** together!
The regional tournaments I’m considering are Miami in the fall, New York in the spring, and maybe American Nationals (since it’s both gi and no-gi and is pretty well attended).
Since I have friends in Chicago, and the regional tournaments there are of a good size, it’s worth it to make a trip there.
The two major IBJJF no-gi tournaments, while young, are really holding their own in terms of attendance. Just goes to show that the label of “World Champion” is worth a lot to people no matter how you look at it.
All these tournaments are growing by leaps and bounds. Just in 2012 most of these tournaments had an extra 20+% of competitors in this division. The future of BJJ tournaments looks pretty damn good.
And the biggest conclusion of all… the biggest and toughest tournaments are the Pans and the Worlds. If you go anywhere, go to those.
So here is my new strategy for choosing jiu jitsu tournaments to attend:

Do as many as I want that are within 2-3 hours driving distance.
Travel far only for Pans and Worlds, unless there is a good reason.
Do the closest World Pro trial (usually one in New York, or worst-case, Montreal)”