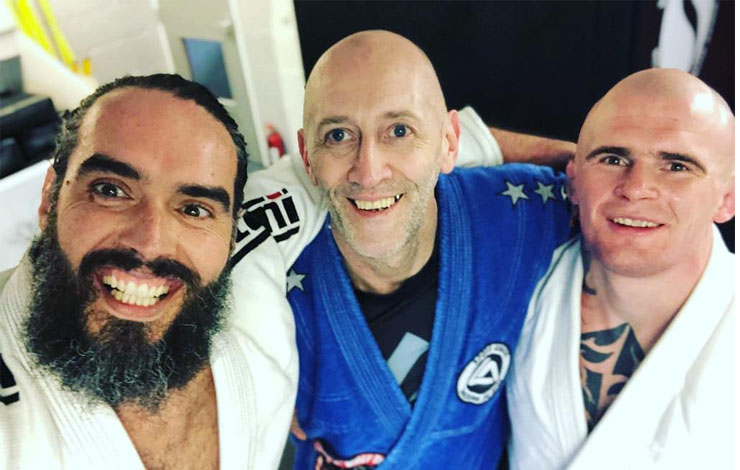 Russel Brand has been doing bjj for quite a while. The comedian started as far back as late 2017. Recently he wrote a book and touched upon how it psychologically affected him saying:

” I wrote quite a lot about Brazilian Jujitsu. I really love it, yeah. Dude my writing, is not from, you’ll understand not from a technical perspective I’m not saying this is what I’ve got to say on
open guard transitions I’m talking about how the psychological impact that it’s had on me. And also in there about like the protocols have going to a group which as a beginner are very relevant – like you touched on how ritualized it is.”

here’s what he previously revealed about his bjj experience.

I had to overcome my fear about getting smashed. It’s good to learn about how to channel your aggression. Life is struggle and Brazilian Jiu-Jitsu teaches you how to deal with it.

Here is what he said to Joe Rogan:

“I, like you, believe in the possibility of change… What happened to me really is I hit 40 and I thought right now I know a bunch of things…  It’s a personal version of spirituality. That’s what I’ve found. William Blake the great English poet says each artist must find his own religion. We have to find out own way, what works for you is not gonna be the same as what works for me   ”

Brand went on to give his club a shout out:

“Go into RGA BUCKS MARLOW GENESIS GYM, giving them a drop because they’re all such huge fans of your show”

He added: “I go in there and I do sessions with Chris the titanium skeleton of a man,beats me up he can cause pain in ways…How is he even doing that?! And  when I try to do the stuff back it doesn’t work. Or puts me in my body a different way. “