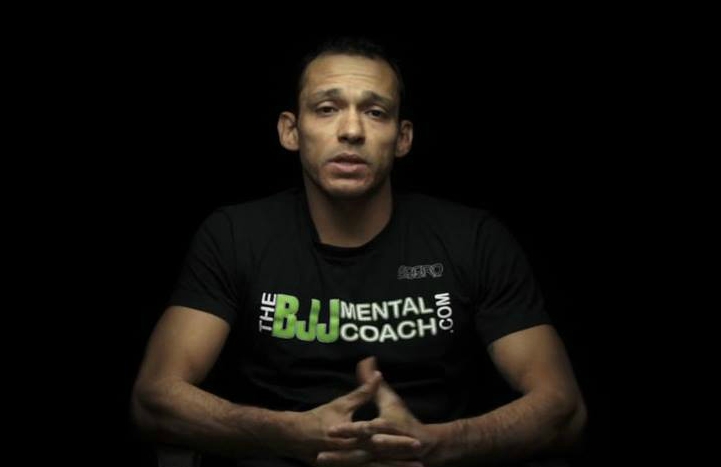 2 months ago, I was sent a copy of the BJJ Mental Coach‘s 4 set of DVDs: ‘Inner Discovery for Outer Success’. I’ll admit that I was a bit sceptical at first. For the past few years, I’ve been reading a lot of books on mental training for sports. So I thought that I had read everything that there was to hear on the subject. Well I was WRONG.

Mental training for BJJ is different than for other sports and  Gustavo Dantas, the BJJ Mental Coach, was able to use his world class experience as a BJJ instructor, instructor and academy owner and combine them with mental skills training & personal development that apply to Brazilian Jiu-Jitsu.

The BJJ Mental Coach Gustavo Dantas, is a fourth degree Black Belt in Brazilian Jiu-Jitsu from Andre Pederneiras. With nearly 20 years of coaching experience and being a World Class competitor, Gustavo is a Public Speaker as well as Certified Mental & Life Coach with a Bachelor’s degree in Physical Education from UFRJ (Universidade Federal do Rio de Janeiro). Gustavo left Brazil in 1999 with a couple thousand dollars, two bags, and one teenage dream: to have his own 100% Jiu-Jitsu Academy and make his living through the passion of his life, Jiu-Jitsu. The Gustavo Dantas Jiu-Jitsu Academy was established in Tempe, Arizona on March 6th, 2012, re-enforcing the statement, “Believe in yourself, believe in your dreams. Hard work pays off”.

Gustavo was the Jiu-Jitsu coach of the Mixed Martial Arts Gym, Arizona Combat Sports for eleven years, where he achieved his 2-0 MMA Record. During that time, Gustavo started the mission of promoting Jiu-Jitsu in the State of Arizona, becoming the vice-president of the Arizona State Brazilian Jiu-Jitsu Federation and turning a small, 40 competitor, “in-house” tournament in 2001 to an impressive 700 competitors in 2011, helping Arizona to be recognised as one of the Jiu-Jitsu power houses in the United States.

I played the DVDs and listened to everything in one go. Everything he said made so much sense and I had few ‘Aha’ moments when he was talking about specific cases where negativity and self doubt was the main cause for failure in Jiu-Jitsu and in life.

Inside this four-disc DVD set, you will hear about Fundamentals, Principles, and Techniques, including five tips that will help you discover what is holding you back from reaching your full potential.

After watching the DVD, I immediately made the following changes:

-Start setting precise goals and work towards them.

– Stop blaming others for my failures.

-Use imagery to visualize myself achieving those goals and having a feel good effect when thinking about them.

-Distance myself from negative people that instead of lift me up, just pull me down.

– Improve self confidence and adopt a more calm and peaceful demeanour.

A few things stuck out, when Gustavo talked about how in the past, when he was competing he was setting a personal goal of just winning the first match, and the rest was extra. He ended up losing the final because he was already happy to be in the final and didn’t believe in his abilities to win the gold. I had the exact same thing happen to me in 2012, when I competed at the IBJJF Europeans as a brown belt. I won my first two matches quite easily, and make it to the semi finals against a tough Swedish guy.I was already happy that I had won at least a bronze medal in such a prestigious so I had a mental crash and was just fighting on autopilot. I can still remember him cranking my arm in the Kimura and I just gave him that win, and was already thinking of celebrating my bronze medal with my team mates…That was pathetic as I didn’t even put up a fight. Well that is something that I will never let happen again. The only thought that goes in my mind now, is submitting my opponent in the final and believing that.

This has made me into a better BJJ instructor and working towards being a better competitor ( my next competition will be in 3 months time). Since receiving the black belt in 2013, I have had a miserable competition record of 9 losses for 1 win. After having had decent success at lower belts, I entered the shark infested waters of black belt, and the level went up by two notches. My last two matches have been much better though including a submission win, and I’m going to continue fighting. I love competing too much for having a string of losses to discourage me.

I like listening to Gustavo because he doesn’t just talk the talk, he walks the walk. His wealth of experience is priceless. You can feel that when he talks, he has had a hard path in life and in Jiu-Jitsu. When he first came to the States in the 90’s, he had to work extremely hard to make a living teaching Jiu-Jitsu. He even had to resort to cleaning houses to make ends meet. He’s been through hard times but that has made him into the strong mental warrior that he is today. He is strong but you still feel that there is a sensitive side to him that he is battling with. I see this because I’m also battling my demons on the mat.

This DVD focuses on this:

– How to create breakthrough confidence for yourself so you can perform to the best of your ability.

– How to identify and handle the negative patterns that are holding you back from achieving the success you desire.

– How to manage your pre-competition anxiety and maintain higher levels of concentration during competition.

– How to stop negative self-talk, over-analyzing, over-thinking, and over-criticizing yourself and your performances.

– How to develop World Class mental toughness with proven results.

All of this doesn’t just apply to competitors, it applies to everybody involved in BJJ. Everybody who is trying to be the best they can be according to their limitations, commitment, time, and physical ability.

The DVD set retails at 97$ (the price of a Gi) and that is money well spent for something that WILL change your life for the better. You can buy the DVD here.

Part of the DVD: