Marcelo Garcia is the Exception: Why 99% Of Top BJJ Athletes Strength Train 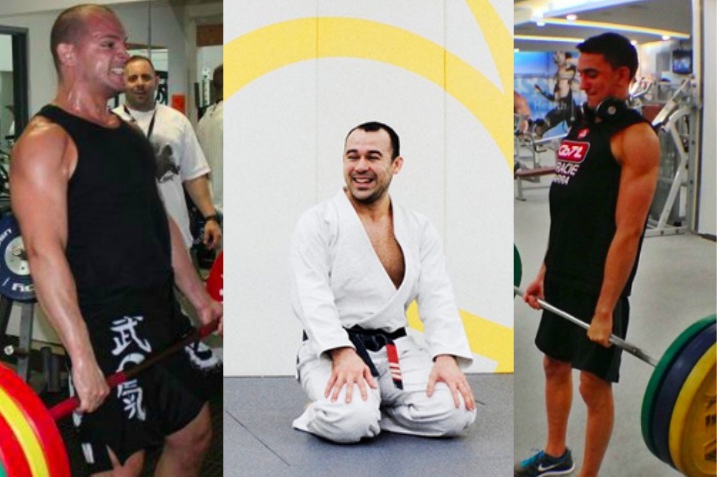 Technique is everything…right? Well, Roger Gracie told me once he doesn’t really lift weights… and thanks to a viral YouTube video (link) Marcelo’s approach to S&C is well known; go HARD on the mats to get your physical training. These two guys are potentially the best grapplers to ever live, so they probably know a thing or two. However, if you last name isn’t Gracie and you didn’t start training at the age of 8 in the heart of Brazil, chances are you won’t reach their famed GOAT status. And chances are, some time spent in the weight room will help you reach whatever your goal is on the mat.

In contrast to Roger and Marcelo, there are quite a few BJJ studs that without a doubt respect the iron, and are often spotted online pushing weights and getting strong. Almost every MMA fighter uses a strength & conditioning coach either full time or in camp before a fight. Mixed Martial Arts has evolved quite a bit since its beginning, and the S&C component can no longer be overlooked. Why should BJJ be any different?

Not only do MMA fighters have multiple S&C sessions every week, they use coaches who are at the leading edge of S&C info. Coaches like Martin Rooney, Joel Jamieson, Loren Landow, and Steve Baccari are writing books on precise protocols for strength, speed, cardio, and power for martial artists. We’re living in a time where we have the data and research to create near optimal training programs for combat athletes. Why guess anymore when you’re in the gym? The proven methods are out there.

When you’re asked, “What black belt is a complete beast on the mats?” who comes to mind? Probably names like Andre Galvao, Rodolfo Viera, “Cyborg” Abreu. I know for a fact, Galvao lifts HEAVY a few times a week, and typically has a conditioning expert come in for a few weeks before a big fight. If you follow his Instagram he’s always posting savage conditioning circuits and brutal all out sprints on the bike. He even credited the Bulgarian Bag to part of his amazing ADCC double gold run in 2011.

In the documentary on Jits TV, Rodolfo Viera mentioned he strength trains three times per week focusing on full body, Jiu Jitsu type movements. If you’ve ever seen this guy without the gi tied you know he’s putting in some serious time in the weight room. His ruthless pressure and endless cardio – demonstrated in Metamoris 2 when he finally passed Braulio’s guard after 19 minutes of relentless passing work – is testament to his commitment to hard training and S&C.

Xande Ribiero has long believed in the power of a strength coach; bringing in BJJ black belt and fitness guru Steve Maxwell to multiple camps during his BJJ prime. Before Xande’s last fight at Metamoris with Keenan he used kettlebell master, Steve Cotter, to prep him for the 20-minute sub-only marathon match. Xande can often be seen online using unconventional tools like kettlebells, steel maces, and slosh pipes. As seven-time World Champion, we can assume those things are working for him.

Notice all of the guys mentioned compete in the heavier divisions. No doubt, being as strong as possible in the upper classes is a MUST, as opponents are heavy, carry a ton of muscle, and make up for what they lack in speed with brute strength. But what about the light guys?

Almost every week Cobrinha posts some kind of unconventional training exercise with either a stability ball or balance board. The Mendes brothers have a whole section of their amazing school dedicated to strength & conditioning, and are known to be outrageously strong. Zac Maxwell, the son of the previously mentioned Steve Maxwell, has almost inhuman strength from a lifetime of fitness training and BJJ, weighing in at only 150. There’s even a picture floating around the internet of a shirtless Miyao deadlifting.

If you haven’t incorporated some kind of weightlifting routine into your schedule you’re doing yourself a disservice. If you’re a BJJ hobbyist, s&c training will help with injury prevention, more successful rolls in class, and maybe shed that extra weight you’ve been aiming to loose.

If you’re a serious competitor, you can’t afford to omit strength & conditioning training. Yes, most of your time should be spent on the mats, but if you’re not weight training, chances are your competition is. Don’t give them that edge. Get under a bar ASAP. It will allow you to impose your game at will deep into the match and in the late rounds.

The E-book, Strength Without Size for Jiu Jitsu and Combat Sports, is the perfect recipe for a grappler looking to get strong FAST, without overtraining or spending a ton of time in the weight room. The program has been proven and specifically designed for grapplers looking to gain maximum strength without adding size. It takes the guesswork out of reps, sets, exercises, etc. so click here to check it out.