Making The North-South Choke Your Number One Weapon in BJJ 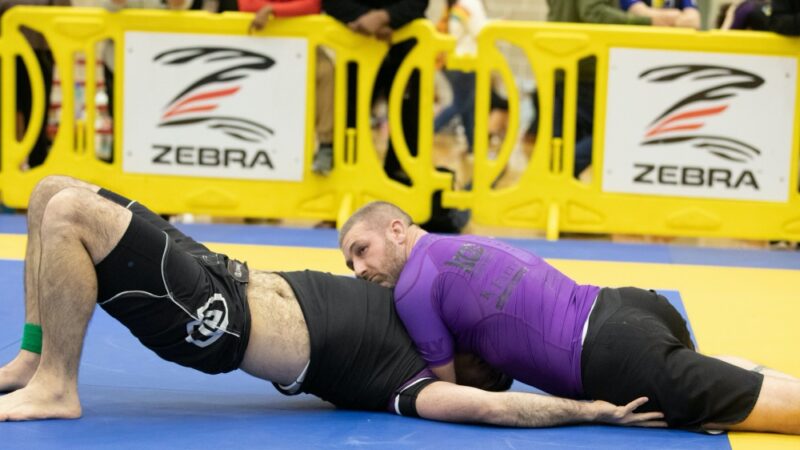 One of the key principles of Brazilian Jiu-Jitsu is to work on securing pins to control an opponent. Dominant positions help you manage the opponent’s movements, giving you time to decide on your next plan of attack. As a beginner advances in BJJ, the idea of transitioning to other pins such as knee on belly and north-south will come in very handy. In this article, we will talk about a powerful choke from one of the most uncomfortable positions in BJJ, the north-south choke.

What Is The North-South Position In BJJ?

The north-south is a position where you lay on top of the opponent with your head pointing towards their feet as you drop your upper body (particularly around the chest area) to pin their torso. It is a variation of the side control position where you line up above the opponent instead of being perpendicular. While in this position, your legs are typically sprawled to maintain pressure and stay mobile. Alternatively, you can drop to your knee to maintain the tightness of the control.

The north-south choke is generally used to pin an opponent for a short period to maintain control before the top player transitions to more secure pins like side control or scarf hold.

A problem that may arise with the north-south position is that the opponent’s lower body can move freely. This creates a threat, especially from an extremely flexible opponent, of possibly taking your back in some instances. For this reason, many grapplers use the north-south as a transitional position.

Just like with any other technique, practicing the north-south position will help you analyze the pros and cons of this controlling pin.

A deeper understanding of the north-south position will open you up to many submission opportunities, as well as flexible transitions to other positions such as side control, full mount, technical mount, and back mount. A dominant north-south adds a nice layer to your top game as common side control escapes wouldn’t work in this position.

How To Perform The North-South Choke In BJJ

In this video, Marcelo Garcia explains his approach to the north-south choke. Marcelo believes that attacks in no-gi are just as effective as those in the gi. There are, of course, advantages and disadvantages depending on the grips, options, and execution. Still, a good grappler will be able to make adjustments provided that the application of the technique is good.

A familiar problem top players experience while in side control is that bottom players can be inactive in their escapes. A passive bottom player will remain super defensive, with little to no attempt to escape the pin or even turn their body sideways to create space.

When this happens, Marcelo suggests pushing the opponent’s arms down, as this will expose their neck for the choke. Pinning the opponent’s arms from side control opens up the neck for attacks. This opening will allow you to wrap your hand over the neck and go for the north-south choke. The execution is more or less similar to the rear naked choke. The only difference is that the head goes under the arm.

Like the rear naked choke, a fully locked north-south choke is a submission with lots of fight-ending potential. After wrapping the opponent’s head with your arm, you may now move to the north-south position as you drop your body weight to the mat while sprawling your legs. A key detail in setting up the choke is to pin the opponent’s arm using your chest as you drop their arm farther from the neck.

Another good tip is to lower your body weight to their far hand to force their elbows close to the ground. Isolating and trapping the opponent’s hands while in side control is crucial. Once the elbow is close to the ground, the hands will be far from the neck, which leaves the neck defenseless. Set up the choke as you transition to north-south from side control. Make sure to line your body up with the opponent.

Lastly, finish the choke by connecting your hands with the choking hand facing palm down and the other hand palm up. Drop your shoulders to put pressure on the opponent. Marcelo suggests not to squeeze and crank the opponent’s neck; focus on dropping your shoulders down to apply pressure.

It is important to stay in the position while executing the choke and continue to apply pressure consistently. It may take a few seconds to get to the sweet spot, but once you’re there, it will be game over for your opponent. The factor of deception and surprise while applying submissions are things he also considers. When facing bigger and stronger opponents, going for a choke and releasing after a few seconds, only to go back at it again once they relax, is a good tactic.

Brazilian Jiu-Jitsu is a martial art that favors the use of technique over brute strength. The pins you use in BJJ can be used to secure submissions and are also great for preventing opponents from escaping. The north-south choke is one of the premier submissions you can do from the north-south position.

It is recommended that you at least explore the technique if you like to go to north-south. It is a battle-tested submission and is undoubtedly a valuable move to include in your repertoire. As Grand Master Helio Gracie once said: “For the choke, there are no tough guys… he just passes out and goes to sleep”.