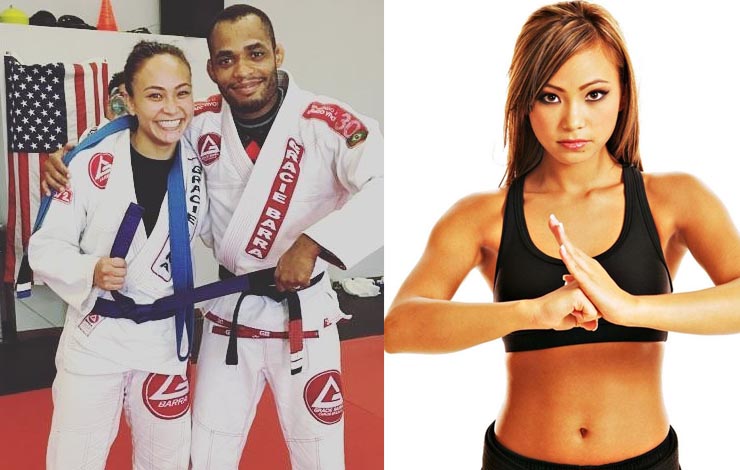 Michelle Waterson has an interesting story. A karate student since the age of 10, Waterson holds a black belt in American Free Style Karate and has also trained in WuShu, Muay Thai, Brazilian jiu-jitsu, boxing and wrestling.

Waterson rose to fame as a contestant on the Muay Thai-themed Fight Girls reality show on the Oxygen television network. She was also featured as one of the fighters in the MTV/MTV2 reality show Bully Beatdown.

She has notable victories against Angela Magana and Paige Van Zant.

Still her most recent loss came by way of rear naked choke as performed by the new division champion Rose Namajunas. As such it’s no surprise Waterson is kicking up her bjj training a bit. She was awarded purple belt over the summer under Rafael Freitas:

So blessed and honored to say I have received my purple belt from @baratagb #graciebarranm I have learned so much both in and out of the gym! He has taught me so much about life and has been there to remind me why I choose the path of a warrior! Thank you so much for everything you do! So excited to for this new chapter in my journey!!! I couldn’t have done it without the help of @rymarzfreitas as well. You guys are family 🤗🤗🤗

Waterson hasn’t fought since April – which she recently addressed to mmalatestnews:

Anytime you’re not fighting you should still be training, those are the times when I feel like I learn the most. We had so much going on this year after my fight with Paige (VanZant), we had the ESPY’s, we went to Singapore and Mexico, and I was on MTV’s reality show “The Challenge” to raise awareness for one of my favourite charities, MVP.

MVP (Merging Vets with Players) is a charity that was founded by Jay Glazer in 2015. Their main aim is taking former military veterans who are struggling with adjusting to civilian life, and match them up with former professional athletes, to create a new community.

In her fight against Namajunas at UFC Kansas City, the scores were even until Namajunas landed a head kick that dropped Waterson. Shortly after, Namajunas secured a rear-naked choke that forced Waterson to tap. I asked Michelle whether her memory of the fight was clear, or if the head kick altered her recollection.

🤣🤣🤣I’M ON THE COVER OF #espnbodyissue2017 🤣🤣🤣 Words can’t begin to describe how I’m feeling right now. I’m so honored, and blessed to have the opportunity to be placed among these to level athletes. I want to thank @espn for capturing the true essence of me 🤗 showing that I can be strong, confident, vulnerable and free all at once! I was scared to bare it all and allow myself to be vulnerable, but I realized that stepping outside of your comfort zone is what makes you stronger! I couldn’t have done any of this without the support of my husband @joshuagomez12 he taught me how to love all aspects of my body, at all the different stages. Pre baby, pregnancy, post baby, off season, in season, win or lose I was always beautiful, and I will forever be thankful. I embrace my body because it is a reflection of my life story! Thank you all for all the love and support!!! You guys are the best😘 . . . . #teamhottie #mma #wmma #karate #karatehottie #hottie #wideawake #kicks #body #flex #confidence #ufc #espn #espnbodyissue #espnw #nm #michellewaterson