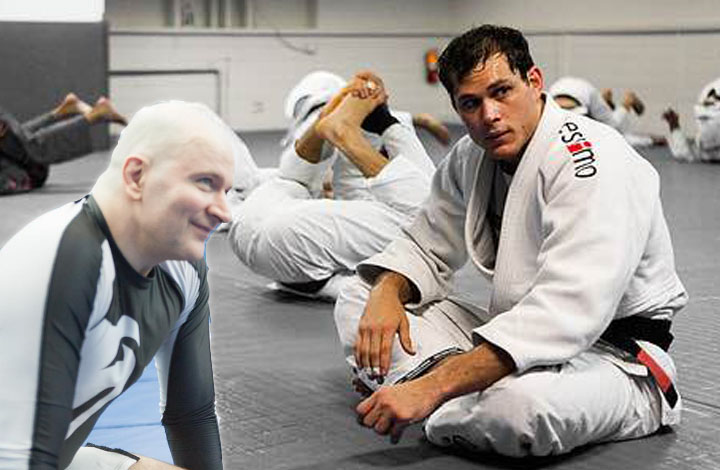 10x BJJ World Champion and ONE Light Heavyweight World Champion Roger Gracie has been a BJJ competitor for 20+ years.  4 years ago at Gracie Pro in Rio de Janeiro, Gracie announced his retirement from the sport.

And what a way to end his career — after a disappointing result in 2012, Gracie was able to redeem himself by finally submitting his nemesis, Marcus “Buchecha” Almeida with a collar choke, ending the fight in a little under seven minutes. If this isn’t enough proof that Gracie is undoubtedly BJJ’s GOAT, we don’t know what else is. But here are some other reasons why anyway.

Given how rigorous John Danaher’s sharp tone reads on his usual postings we’re quite surprised the veteran coach is gushing about another grappler, one that is not under his banner even – the great Roger Gracie.

“Proactive and reactive approaches to the sport: A very useful distinction to make in jiu jitsu and combat sports in general is that between proactive and reactive approaches to the sport.
A proactive game is one where I initiate moves against my opponent – I am the first to act.
A reactive game is one where I wait for my opponent to act and I react to his movement, taking advantage of any vulnerability that has arisen as a consequence of his initial action.
When one looks at important figures in the history of jiu jitsu, most students usually identify quite quickly whether their game is predominantly proactive or reactive. For example, Helio Gracie would be commonly seen as a classic example of a man whose game was largely reactive. He would play a rather passive game and look to exploit errors in his opponents initial movements as the path to victory.

The great Marcelo Garcia is a fine example of a game that most people would identify as predominantly proactive. He would fight hard to initiate all the movements and having gained an initial edge, work hard to maintain it through to the end.
Of course every jiu jitsu student has a responsibility to learn both aspects of the game. Of the two men I mentioned as exemplars of proactive and reactive styles, I am certain they could, if they wished, play the opposite game very well if they wanted to, they simply chose not to.

As a general trend over the decades, proactive approaches to the sport have become more popular than reactive ones, probably due to the imposition of time limits on matches.

Now, I want to go much further with this distinction, as I believe it can illustrate some important lessons for combat sports in general, the greatest classical jiu jitsu player of all time, and my own approach to the sport.
In my opinion, the optimal approach to jiu jitsu and fighting as a whole, is a mix of proactive and reactive games – but not in the sense that most people talk about. I don’t mean that sometimes you play a proactive game and sometimes reactive game – I mean YOU PLAY BOTH AT THE SAME TIME.

How is this possible, since they are diametric opposites? The answer is this: your game can be split into disparate components , some of those components can be proactive and some reactive. Thus your game as a whole can have proactive and reactive components working in unison at the same time. Indeed, I believe that almost all great jiu jitsu players exhibit both elements simultaneously (including the two mentioned above) and that the basic distinction between proactive and reactive games oversimplifies what I see in great players and limits many students understanding of the game and how to make progress. The conventional narrative of a choice between a proactive or reactive approach to the sport is an oversimplification that limits our understanding of the best athletes in the game and thus our own attempts to improve.

I will try to illustrate my point first with an example taken from boxing. When most people watch Mike Tyson box, they see an aggressive, proactive fighter taking it to his opponents and overwhelming them. Yet Mr Tyson himself always described himself as a counter puncher – a reactive puncher who capitalized on his opponents initial strikes to counter and score. How is this possible?
Mr Tyson took different parts of his game and employed a simultaneous mixed proactive and reactive game. His initial footwork was straightforwardly proactive. He was always the first to initiate closing the gap and advancing into his opponent’s space (usually behind a crouching jab allied with head movement for safety). This proactive advance forced a reaction from his opponent – you cannot simply ignore someone aggressively stepping into your space in boxing. His opponents would try to move and hit. It was at this point that the reactive elements of his game would emerge.

A boxer is never more vulnerable than when he has thrown a punch that does not land – He is now out of position and often out of balance. Mr Tyson’s head movement and shifting footwork to angles made most of his opponents punches miss and allow him to punch reactively with the part of his game that most people remember- hooks and uppercuts with crushing power on people who were in no position to defend them. Thus was his game an ingenious mix of proactive footwork and distance closing allied with reactive evasion and power punches.

If you try to categorize him as either a proactive or reactive fighter, you simply will not not understand his game. It is clearly exhibits elements of both, but in different areas of his overall game. The same is true of the athlete who I believe was the finest classical jiu jitsu player I ever sparred with or saw – Roger Gracie.
Mr Gracie’s game is truly worthy of deep study. Once again we see the idea of a simultaneous proactive and reactive game. Mr Gracie had a proactive positional game and a reactive submissions game. Very few people could impose a positional game in the manner in which Mr Gracie did. When he got half guard top it felt as though someone had parked a Cadillac on your chest and asked you to play jiu jitsu. His positional game is best alluded to via the image of a ratchet – it allowed movement in only one direction. Once he gained a position on the classic hierarchy it was rare indeed for him to lose it – if he ever gained some form of positional advantage it was hell to take it back from him. This pressure could not be ignored by his struggling opponents. As they worked harder and harder to resist the positional pressure, their stance, posture and movement became more vulnerable and the opportunity for reactive submissions become more frequent and easier – usually in the form of what people think are basic submissions. The deeper point is this – Mr Gracie’s game had both proactive and reactive elements working together that the same time – a proactive positional game allied with a reactive submissions game. The best players always seek to mix proactive and reactive elements simultaneously rather than a game that is all reactive or all proactive. This is possible because our overall game can be split into components, some of which can be proactive and some reactive at the same time.

I often see students who are enthusiastic about learning a proactive attacking style based around submissions- that is a fine goal. However, they often lack any ability to create and maintain any form of positional pressure on their opponents and a consequence, their opponents have an easy time defending the submission attacks.

The best set up for all submissions is STRONG POSITIONAL PRESSURE THAT FUNCTIONS AS A CATALYST AND DISTRACTION TO THE ENSUING SUBMISSIONS.

Athletes who focus on submissions at the expense of positional pressure usually find that their success rate is low because the lack of positional pressure means their opponent can defensively position their limbs in a manner that makes the submissions unlikely to succeed. When they are first distracted by extreme positional pressure, the distraction and concern over position makes them forgetful of the submission danger and suddenly the submissions start coming a lot easier.
Now this insight with regards our game being separated into different components and each having proactive and reactive working in unison can be extended in many ways. For example I can have a proactive armlock game allied with a reactive leg lock game, a proactive sweeping game allied with a reactive leg lock lock game – the possibilities multiply wherever you look.
The foundation in the classical jiu jitsu game however, will always be that between positional pressure and submission, utilized by almost all top athletes and exemplified best by Roger Gracie, who did it better than anyone else in my experience. It is my belief that this classical ideal can itself be surpassed by a new approach to the position/submission dichotomy, but that shall be discussed in future posts.”

In this video, Danaher explains why he believes that Roger is the greatest Jiu-Jitsu of all time. His criteria is success in 4 aspects of Jiu-Jitsu: