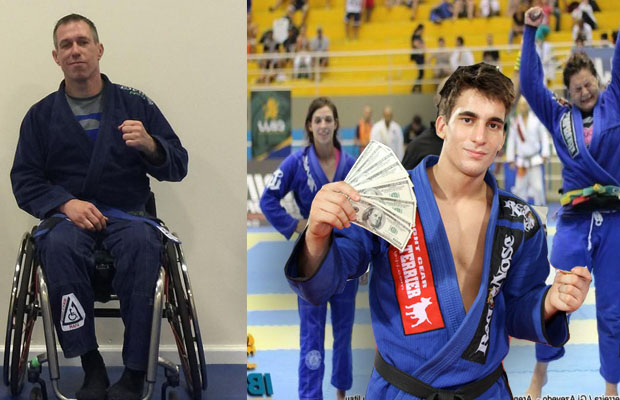 Often times you read about the expenditures, aches and doubts related to jiu jitsu. Some people think they’re too old, some think they’re too fat, some are just afraid to come out of their shell or over extend financially but at the end of it the truth is simple – if you want to do something you’re gonna go ahead and do it anyway.

One of the best leglock experts around Roli Delgado recently wrote:

Here’s my google translate for “it’s too expensive” or “I can’t afford it” in regards to gym memberships.

“I just don’t value working out at that price.”
That’s the reality of it, we all have things we spend extra money on, where that money goes shows what we value.

I read years ago that happiness is doing not having, I have had people argue this with me but I find it to be fundamentally self evident in what works for me.

He makes a great point, there’s plenty of ways to rationalize your expenses but perhaps the biggest in the end is “I believe I get my value for my money”.

BJJ is Too Expensive? Why Training BJJ is Actually The Best Investment

Those who do bjj know the value of it – which is why they keep coming back year after year.

Mr Jiu Jitsu also just weighed in on this topic:

I know a kid in Brazil that was born without arms or legs that does jiu-jitsu. I know a guy that’s in his latest stages of cancer that gets up every morning and lifts weights knowing that death awaits him at any moment.

But in the end it’s not all about money – some people just expect to be great at it right from the start which is why their age and or physical condition bothers them.

Age can be a hindrance – especially if you’ve got serious health concerns however for the majority of people it can be a positive influence.

And in the end regardless how in shape you are you always get your butt handed to you when you start doing jiu jitsu.

“There’s something about jiu-jitsu that puts you in your place. Even if you’re the top guy, you still have to teach little kids,” Kelly Slater, 11x surfing champion of the world said.

“If you have insecurities, they get worked out on the mat. I just think it’s a humbling thing. People think of martial arts, they think that’ll make you a badass and you’ll kick somebody’s butt, but to me it’s the opposite. If it’s treated right and taught correctly, it’s the opposite — it gives people confidence, and I think with that confidence comes less ego and more respect for other people.

And of course everyone can be overweight, sometimes even drastically so but bjj has helped a number of people through the time including comedian Joey Diaz who was pretty big when he started!

“I did it on my own.” – Diaz says adding ” I was too embarrassed to tell anyone about it. Then a couple years ago I got to 480 pounds and I knew I had to do something  so I went to the Y at like off hours so nobody would see me f**king working out and s*it. But then I moved to the valley so I joined the kickboxing school and UFC had really kicked in and I’m getting all these f**king kids that grease their hair and do steroids and kick the shit out of me and I go: “Are you a fighter??” and they go “NO, I’m a fireman” then why are you f**king me up like this? And I went home and I’m like what am I a p**sy? “