Inverted Guard? No Problem – Learn How To Pass It With Marcelo Garcia 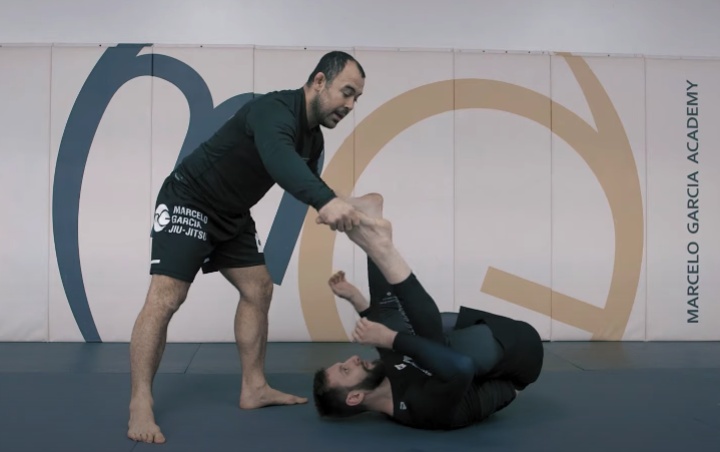 Every now and then, you’ll stumble across someone who loves getting inverted all the time. If you’re inexperienced with this sort of a game, you’ll find it difficult to pass these opponents; and you’ll probably be leglocked quite often as well.
Fortunately for you, Marcelo Garcia has a few words of advice on how to go about passing the Inverted Guard.

First of all, when you’re passing someone’s Inverted Guard, Marcelo points out that you don’t have to do it by facing the inverted side. Instead, you can try to do a semi-circle around them, ending up where their backside is – and then start applying pressure in order to pass. In other words, you don’t have to stay next to your opponent’s head so as to pass their Inverted Guard.

However, what if your opponent is really good and they just keep spinning to the side you’re trying to pass them from? This can be really frustrating, and it means one thing: you’ll have to face them from the front and pass from there.

WATCH YOUR LEGS AND ENGAGE WITH YOUR ARMS

Before learning how to pass the Inverted Guard from the front, let’s see what Marcelo has to say about staying relatively risk-free against your opponent’s attacks.

Their offense will revolve around leg attacks, in one way or another. So, in order to stay safe, Marcelo explains that you can choose to keep your legs at a distance.
What this means, Marcelo explains, is that you cannot place your lead leg in-between the opponent’s legs. Your leg can go to the side; but never inside the space between their two feet.

Now, if your legs are behind and you don’t want to engage the opponent with them, then you have to do so with your arms. In that fashion, you should first apply pressure onto their shins. This will force them to frame with their hands. From here, you can take advantage of their framing against them.
Marcelo demonstrates that you should learn how to manipulate the opponent’s legs with your arms and bodyweight, so that they will push them out and create space – which you will use for pummeling and then collapsing on top of them; closing the distance as a result and ending up in a North South position.

Marcelo has a word of caution here as well. You have to watch out not to drop your hand in-between the opponent’s legs, as that would give them an opportunity for another set of attacks.

A MORE DYNAMIC WAY TO PASS THE INVERTED GUARD

However, this sort of an approach will sometimes show itself as an insufficient one. Because you’re keeping your legs in safety, at a distance, you won’t have the speed nor as much control as you could have if you were closer to your opponent. Luckily, there’s a way to close that distance and stay away from getting attacked; as Marcelo puts it, you need to use your legs, not give them away.

He shows that you, basically, have to step outside of the opponent’s leg; and then put all of your bodyweight on top of it, by kneeling down and pressing your shin into it. What’s going to keep you safe in this position is keeping your foot outside of their leg.
From there, proceed with pressing into them – just be careful not to end up on top of their leg while doing this – as you close the distance and shift to Side Control.

Marcelo explains how you can pass the Inverted Guard in much more detail on the video below: