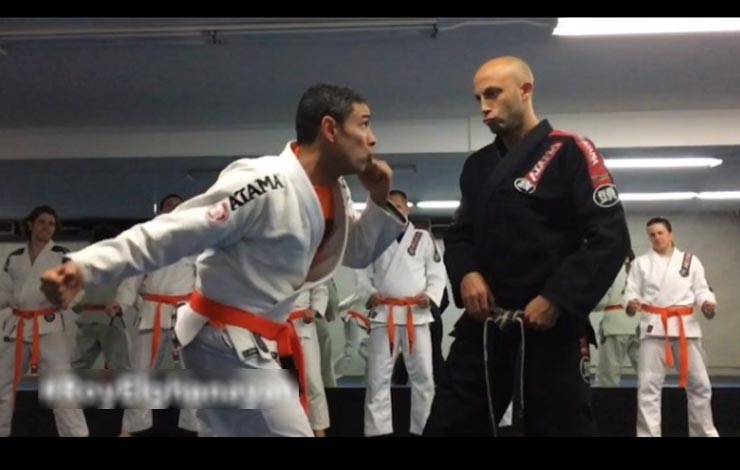 We often hear about contests and comparisons for the ultimate martial art – but what we don’t see every day is a self proclaimed Bruce Lee of Krav Maga do the test in a bjj gi.

The Bruce Lee of Krav Maga is a self titled nickname – however the very intense test stems from:

“In this test Roy had to demonstrate his knowledge and expertise in Krav Maga, Self Defense, Mixed Martial Arts, Judo, Japanese Jiu-Jitsu, Israeli Ju-Jitsu and Fighting. He was tested by Master Mati Elyashiv, 9th Degree Black Belt from Israel. The test was a total of 3 hours long with a surprise element of demonstrating survival skills against multiple attackers while blindfolded.

THE PROCESS OF THE TEST
1. Weapon Defense and Offense Demonstration.
2. Hand-To-Hand Combat: Self defense using Krav Maga, Judo and Jiu-Jitsu techniques.
3. Multiple Attackers Defense/Offense.
4. Surprise element: Multiple Attackers Blindfolded!
5. 65 rounds of sparring – fighting (each round is with a fresh fighter).”

Elghanayan has several fight coordinator credits to his name including being a trainer for – Actress Jessica Chastain’s in Krav Maga for the movie Debt.

One interesting tidbit we uncovered researching the Bruce Lee of Krav Maga is this:

“BJJ: Your resume includes Israeli Ju-Jitsu. What is Israeli Ju-Jitsu?
RE: It is a modern version of Japanese Ju Jitsu. Its everything, standup, take downs and ground. Me, my sinse and the other black belts of our school took what we knew and modified it and added to it and made it aggressive and deadlier that what it used to be. We also incorporated the Krav Maga strategy. That together I would say is one of the ultimate fighting styles for competition or self-defense.”