I Remember Jiu-Jitsu As it Was 20 Years Ago 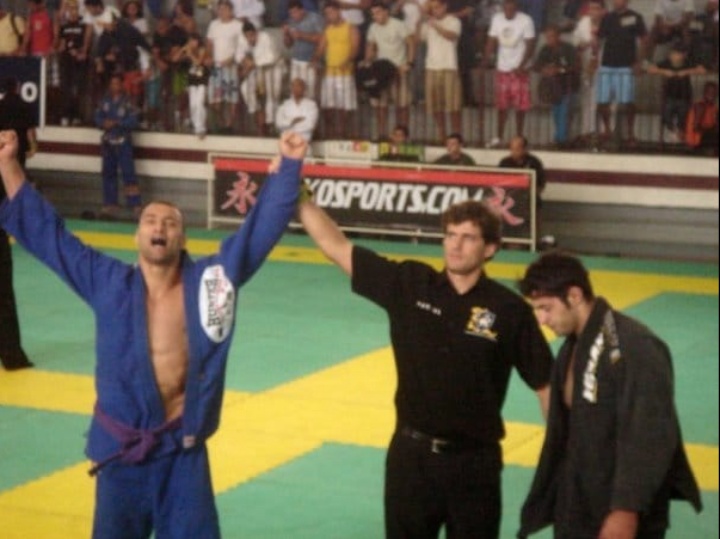 Without any accusations, implications nor criticism of what it is today, without any subjectiveness or giving personal opinion (even though I have one), I will give some short guidelines of what I remember jiu jitsu was like 2 decades ago, when I started it.

Dojo was considered almost sacred place. Bow down on and off the mats. Each time. As many times you would step on/off the mats. Besides, there was rearly any mats. Mostly there was „lona“ (kind of awning).There was no shoes of any kind on the mats. Putting your gi on and off was done outside of the mats.

No taking the gi off during the whole training. For drinking water or going to the bathroom you had to ask the coach. Leaving the mats in the flip flops. For being late there were pushups. For being late big time, you couldn’t enter. On the entry to the mats you would have to salute everybody starting with the higher belts. Coach (calling him Professor or Sensei) showing the technique everybody is quiet and standing. Not sitting, laying down or what ever asana you could imagine, but standing still and quiet. No questions („what if“ or „when he“…) whatsoever, until the training is over.

Once the roll starts or the coach would put the pairs together, or you would wait the higher belt to pick you. No asking or challenging higher belts for sparring whatsoever. If so, you would get smashed big time. There was no heel hooks, no knee reaping. For anybody. Browns and blacks would though exchange footlocks, kneebars and so, but no heelhooks. To ask for a pause was a shame. Or you tap, or you go puke and come back. One gym I trained there was even a bell you had to ring if you are quitting the roll.

There was no talking about the roll once it is over. Talking who smashed who was considered disrespectful. There was no social networks and no photos, videos, comments or whatever there is today. No youtube and online instructionals. Source of your knowledge was the coach. No cell phones near the mats, no filming, taking photos. Students have been in charge of cleaning the mats after the training.

Training in two or more academies in the same time was considered big no-no. Turning the back to your academy one was considered „creonte“. The traitor. Graduations were done during the graduation ceremonies or whenever the coach decides. Asking anything about when or why about being graduated was considered disrespectful. Nobody except the highest black in the academy could promote anybody. Not belts nor stripes. Being a black belt was a „whole package“, knowing how to fight (gi, no gi, valetudo), and being a rolemodel in everyday life. There was no IBJJF, UAJJF, JJIF, or any other. There was CBJJ, only in Brazil.

Students would learn and train, professor would teach. Not the other way arround. It was considered big honor if coach would show technique on you. You would get very proud. Rolling with professor was exceptional honor. Exchanging force was considered ugly and disrespectful. There was obvious sence of hierarchy on the mats. Respect. A lot of it. As much discipline there was in the academy, competitions were pretty wild experience back then. Huge ammount of rivalry, screaming, shouting, cheering. Everybody wore academy patches. Proudly. Your team was everything.

Sometimes referee would have to take some of the patches off because there were a lot of them, and they were everywhere. Some guys were decorated like a Christmas tree. Competitions were rare compared to what it is nowdays. There was no monitors or digital scoreboards. There were paper scoreboards. Your team mates would measure time for you and scream, beacuase there was no time monitor for the public nor competitors. There was no schedule of the competition, meaning you know the time of your fight. You had to be there in the morning till evening and listen when your name will be called. Often very hard to hear it due to very loud screaming in the hall. Competitions were one big mess. But fun. Places like Iate clube in Ganabara, Rio, or Tijuca tenis Clube were legendary and places to remember. Those green and yellow mats to be remembered in the history of jiu jitsu.

There it is, a short retrospective from my memories. OSS!