How To Perform The Ninja Choke In BJJ 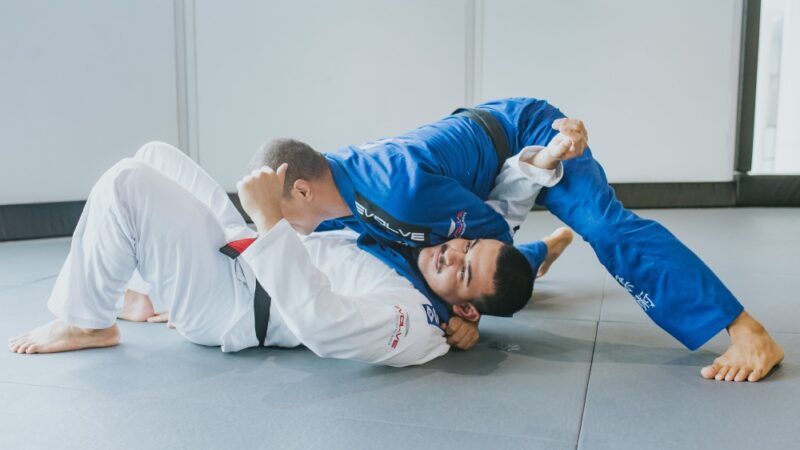 Brazilian Jiu-Jitsu is a martial art that uses leverage to beat a fully resisting opponent. Typically practitioners use a uniform called the gi in training. The uniform is robust and sturdy enough to be used as an extension of your body. Various gi-specific techniques have been developed over the years, and many athletes worldwide have included them in their games.

The beauty of BJJ is that you can build a game that’s uniquely yours. Today we’ll talk about a gi technique that will surely catch your training partners off guard – the ninja choke.

Learning how to manipulate the gi to your advantage is a smart move to make. You can use different parts of the gi to control and limit your opponents’ movements. Since the gi is made of tough fabric, you can easily use it to wrap around the limbs and neck without the risk of it getting damaged.

The ninja choke is one of the best gi techniques to surprise an unsuspecting opponent. This technique is easy enough to execute and does not require any unique attributes. If you train BJJ in the gi, there is no reason to not include the ninja choke in your repertoire.

What Is The Ninja Choke

The ninja choke is a gi strangle, usually done from the side control position. The fact that this submission is applied from a top pin makes it a safe technique to use. It does not place you in a compromised position if you can’t complete the choke. This means that you can use it repeatedly for as long as you are in side control.

In this video, the Invisible Jiu Jitsu Youtube Channel shows the basics of the ninja choke. The ninja choke is a lapel choke from the top. As discussed, the technique is applied from the side control position, but you also use it from the kesa gatame pin. An excellent way to hide the move is to use shoulder pressure and threaten the transition to mount. Doing so will force your opponent to stay on the defensive and keep them preoccupied for the time being.

Open your gi and grab the far side bottom lapel. Feed the lapel to the choking arm, block the far hip and move to north-south as you loop the lapel on your opponent’s neck. Alternatively, you can also use your mouth to grab the gi and feed it to the choking arm. The transition to north-south removes the slack and makes the choke as tight as possible. To finish the choke, move all the way so that you are parallel to your opponent, move your head to the far hip, and stay heavy as you pull the lapel against the neck.

Take note to grip the gi near the bottom and not in the middle. If your grip is incorrect, you may not have enough space to rotate to north-south. Keep it loose enough so you can move freely, and adjust your grip as you turn.

Another tip is to block the far hip with your hand before you transition to north-south. If you don’t do this, your opponent will follow your movement, and you won’t be able to complete the choke. A common mistake that many people make (including black belts) is using the near side lapel instead of the far side one. The near side lapel version won’t work on good grapplers and escaping the choke is very simple.

What do you do when your opponent stays super defensive? You can abandon the ninja choke and use the space on their torso to transition to mount. The combination of the ninja choke and mount threat is great because you force the opponent to choose between getting choked or being put in a more dominant pin. This idea of forcing the opponent to choose between multiple bad spots is the key to a solid Jiu-Jitsu game.

You must understand that this is a technique that will catch many grapplers for the first couple of times. As you continue to roll with the same training partners, the novelty of the move may start to fade. Don’t fret once this happens, as this is the case with many unorthodox submissions. Use the ninja choke as a setup to go to mount, as we previously discussed. You can also use it as bait to move to other submissions.

Remember that in BJJ, you should always think in combinations to get an advantage over the competition. You can use the ninja choke to force them to react to your liking; you can then capitalize from there. Another approach is to force them to go to positions where you can apply the ninja choke to finish the match. Whatever the case, you can invariably include this submission in your attacking chains to keep your opponent and training partners guessing.

The best way to master a technique is to drill it consistently. Start by practicing the fundamental movements with an unresisting training partner. It is a good idea to practice on both sides so that you can threaten the submission anytime once you get to side control. Gradually increase resistance as you get more comfortable in the basic movements of the technique.

Finally, you don’t have to crank the actual submission while you’re still studying the move. Be mindful of your training partners, and practice the technique in a safe and controlled manner. Continuously be open to feedback and reach out to your instructor if you have questions.

The ninja choke is just one of the many gi-specific techniques you can do in BJJ. As you continue to build your game, ensure that you have a few tricks up your sleeve so you don’t become predictable. Keep this submission in your back pocket, and watch how annoyed your training partners will be when you catch them with it.