How To Face A Judoka In a BJJ Match 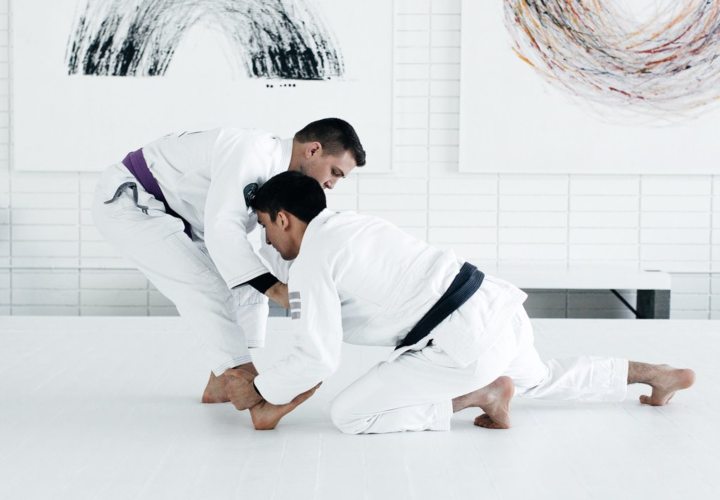 Competing against a judoka in Brazilian Jiu-Jitsu (BJJ) shouldn’t be terrifying.

Because BJJ competitions start standing, those with a background and understanding of Judo will have an early advantage against those who do not. For many people, this means that they are concerned or intimidated by their opponent’s ability to take them down to the mat.

It’s not just a takedown, either. It can sometimes be a humiliating slam or sweep that places you flat on your back.

Although you might be extra careful when standing with a judoka, there is no reason to be overly concerned.

Today, Evolve Vacation brings you “How To Combat A Judoka In BJJ”.

In Judo, the primary objective is to ground your opponent. Competitors will look to achieve tight grips before unbalancing their opponent and sweeping them or throwing them to the mat. Once they are on the ground, you can attempt quick submissions or pin them to the mat by using heavy pressure to the chest and upper body.

So, the differences between the two sports become immediately apparent. Brazilian Jiu-Jitsu, as we know, is mostly contested on the mat. The majority of points that can be scored and submissions to ultimately win the contest are most likely when the fight hits the ground. A throw or sweep in Brazilian Jiu-Jitsu is sometimes just the beginning of the contest, whereas in Judo that could be the finishing sequence.

On the topic of the finishing sequence, Judo can be won by scoring an ‘ippon’ – which is essentially the ultimate way to win. An ‘ippon’ can be achieved in a couple of ways. An athlete can take their opponent down with such speed and strength that it places them on their back. They could use pins to keep their opponent grounded on the mat for 20 seconds. Or once the fight hits the mat, they can look for a quick submission.

What exactly do you need to defend if you are coming up against someone with experience in Judo?

It’s a combination of many things, of course, but most importantly you will need to defend their aggressive and efficient takedown attempts. If they do secure a takedown, you will also need to quickly shift your attention to avoiding a fast submission or escaping from their established pin techniques.

It is likely that your opponent will have a better understanding of how to take the fight to the mat than you. It’s more than that, as well, because their takedowns are often executed with such ferocity and power that they can limit the ability to quickly counter or respond to the action.

Additionally, their takedowns seamlessly flow into submission attempts. Whereas a BJJ competitor might take you down and then start thinking about ways to pass the guard and score points, a judoka might instead look to quickly snatch an arm and attempt an armbar. And if they can’t submit you quickly, they will likely look to maintain their current position (mostly side control or mount) and apply intense pressure to your upper body. Judo pins, such as tate shiho gatame, yoko shiho gatame, and kesa gatame, can often be so heavy that it forces the opponent to submit from the pressure alone.

A great way to think of what a high-level judoka can achieve is by reflecting on Ronda Rousey’s dominance in the UFC a couple of years ago. While most competitors in mixed martial arts had a BJJ background, Rousey entered the organization after winning a bronze medal in Judo at the 2008 Olympic games and soon proceeded to capture the attention of masses as she quickly submitted her opponents with armbars. She did this by quickly taking her opponent down with a hip toss or other judo-style throws before immediately locking up an armbar submission, rather than moving to mount much like the traditional sense.

How to defend a judoka

All of the points below will help you understand how to block and negate the abilities of a judoka before implementing your strengths in competition.

This might seem like a no-brainer, but it needs to be said. There are no ‘secrets’ to defeating a judoka; rather it is a reflection of your attitude and willingness to improve your takedowns and takedown defense.

You should always be focusing on improving your stand-up abilities. BJJ, just like Judo, starts from the standing position, yet many of us practice exclusively on the ground and sometimes forget or disregard the standing element of the sport. If you’re rolling with teammates after class or drilling specific techniques, try and start from a standing position. Pulling guard or sitting down to start a roll might save you more time and be relatively easier, but you are missing out on experience and techniques that are fundamental to the sport as an entirety.

Likewise, if you are practicing a particular technique, you should consider practicing it in a sequence that includes starting with a takedown. What’s the point of being excellent at arm-triangle submissions if you can’t get to a dominant position? Start with the takedown and flow through the rest of the movements.

It’s for this reason that we do not recommend pulling guard against a judoka. While it might seem like the right move against someone with excellent takedowns, they are just as good as securing that top position that they desire. However, if you do happen to feel very comfortable working from your back, it might be something to consider.

You shouldn’t feel intimidated by the takedown threat of your opponent. Even if they score a powerful takedown, it isn’t the end of the contest.

In fact, the takedown gets things going in BJJ. You might be a couple of points behind to start the contest, but you can start clawing your way back by attempting sweeps or guard passes. After all, while a judoka might have an advantage while standing, you should have the advantage when the competition hits the ground!

In saying that, there is a need to respect their abilities. Because they are confident and capable of scoring takedowns, it will mean that they are also gaining the top position where they are so dominant. A takedown will give them the position that they want.

That leads us to the next strategy.

Slow the pace down

A judoka is experienced in a fast-paced, scrambly environment when the fight hits the ground. If you can secure an overhook while in the bottom position and recover guard with your legs, you can then begin to control your opponent and start looking for sweeps.

Remember, a judoka wins a match if they apply a pin for 20 seconds in Judo. In BJJ, there are no points for holding a position. They need to transition or submit you. This is where your strengths come into play.

So relax, keep calm, and begin using all of the elements of BJJ that you have been working on in training.