Here’s How To Use The Pendulum Sweep In BJJ 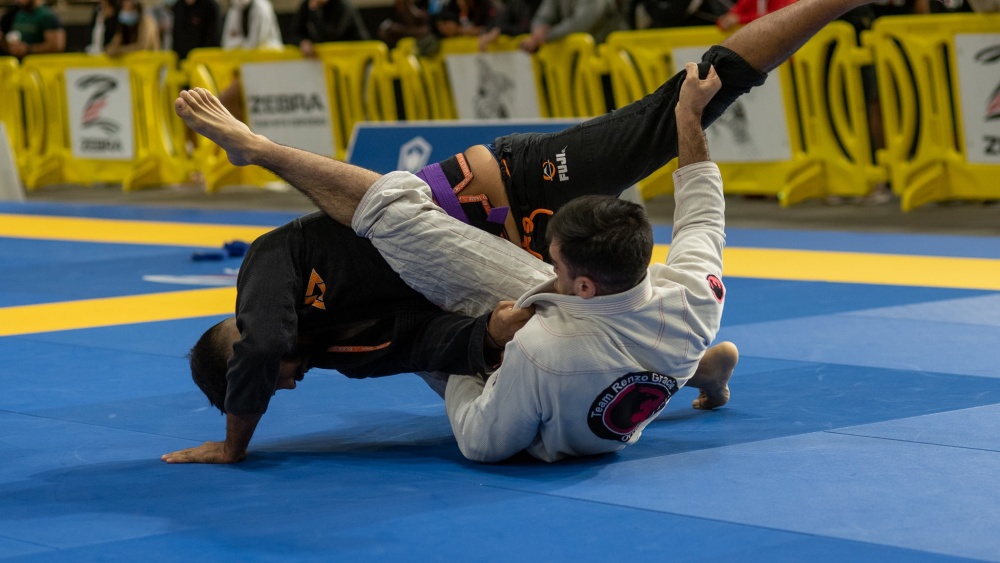 One of the most fascinating aspects of training in Brazilian Jiu-Jitsu is that you can still be highly dangerous even when you’re off your back. The guard is a primary position in BJJ that allows you to stay relatively safe from attacks.

It is also a prime spot to off-balance the opponent, making them vulnerable to sweeps and submissions. The attacks you can use mainly depend on the guard you prefer. Today, we’ll talk about an important sweep to learn when using the closed guard, the pendulum sweep.

What Is A Sweep?

A sweep is a technique that allows the guard player to advance to a more dominant position. Executing a successful sweep requires a good understanding of kuzushi (unbalancing), posture, leverage, and timing to pull off.

Many BJJ athletes over the years have gravitated towards playing the guard as soon as the match starts. It is an absolute must for BJJ players who love to play guard to have a handful of sweeps (on top of submissions) to stay offensive.

There are many benefits to having a solid sweeping game. Aside from the aforementioned ability to advance to a better position, it also gives you more options to work with in terms of attacking your opponent. In order to be successful in playing any form of guard, you should be able to constantly get your preferred angles and grips. Contrary to popular belief, the guard should be a position where you should always think of forcing your opponent to be on the back foot.

A good tip to make your sweep easier to execute is to combine it with other sweeps and submissions. This is especially the case with the pendulum sweep, as it is a technique that requires momentum and proper distance management to work.

The pendulum sweep is a technique that usually starts from the closed guard. The defining trait of this sweep is that you should first go underneath their leg and use momentum to sweep them over. Remember that if you hook under the leg on the right side, you’ll be sweeping them to your left. Therefore you need to remove their base on the side where you’ll sweep.

Make sure you hide your intentions by not making your grips too tight. From here, do a side crunch as you underhook the leg, open your guard, and swing your leg to force them on the side with no base. Chewy advises that your leg should go up near their chest as you swing to make it easier to flip them over.

A common defense to the pendulum sweep is to turtle up and fight the pendulum leg’s momentum. When this happens, you can create momentum by swinging your pendulum leg multiple times to break the defender’s base.

In the event that you still cannot turn them over, it doesn’t take a lot of effort to return to the closed guard. Alternatively, you can use the pendulum sweep to set up other attacks. We’ll show you one follow-up technique you can perform in combination with the pendulum sweep.

The pendulum sweep to armbar combination is a cool sequence guaranteed to turn many heads. This combination is perhaps one of the most common yet stylish moves you can do from the pendulum sweep. It is surprisingly not too complicated to do as well. In this video, Fabio Da Mata from the EVOLVE Fight Team shows the details of the technique.

Start by doing the same pendulum sweep setup. Break the opponent’s grip and control the elbow. Open your guard, pin the opponent’s shoulder using your leg and attempt the sweep. If the opponent posts their arm to the mat, you can transition to the armbar immediately. Lift your hips as you place your hook on the back of their head, and loop your arm against their post. The last step is to keep your grip on the arm and turn.

You can also grab the pants near the bottom of the leg to add more control as you turn. This should land you on the armbar position. Pinch your knees and raise your hip as you pull back the arm to finish the submission.

A Safe And Fundamental Technique

What’s amazing about the pendulum sweep is that there’s minimal adjustment between gi and no-gi. In the gi, you can, of course, grip the sleeve and pants instead of grabbing the wrist and leg.

But aside from that, it is pretty much the same. This is great for beginners because you’ll have a powerful weapon that can be used regardless of what you wear in your training. You can also use the technique in mixed martial arts, as the mechanics of the pendulum sweep keeps you safe from attacks.

The pendulum sweep is easy to execute once you master the intricacies of the technique. All you need is at least one sleeve grip, and you can attack from there. It is not uncommon to see matches where competitors use the pendulum sweep after failed submission attempts. We encourage you to build your own attacking series to make your pendulum sweep hard to defend.

In summary, the pendulum sweep is one of our top recommendations for an effective and attacking closed guard. Many champions of yesterday and today have leveraged the power of this sweep. It is a timeless technique that will help grapplers of all levels improve their game drastically.

Don’t forget to drill the pendulum sweep on both sides so that you can maximize the potential of the move. Watch the top black belts and see how they utilize the pendulum sweep to force their opponents to accept sweeps and create openings for submissions. It is indeed a timeless sweep that will serve you well for years to come.