Get it Right Once & For All: The Facts on REAL Strength For Grappling Athletes 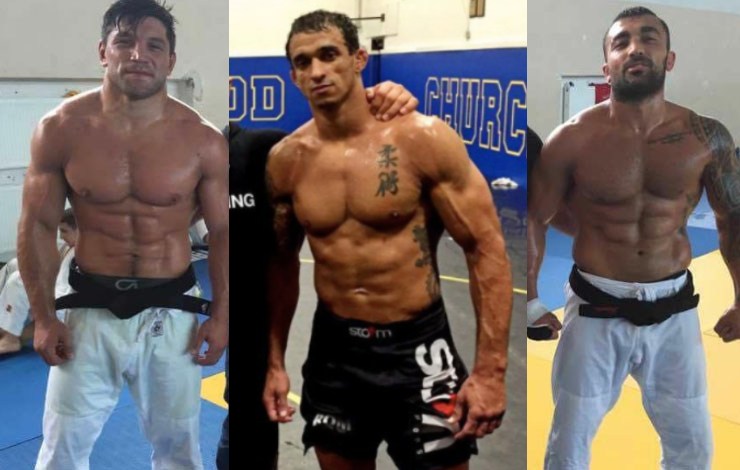 When it comes to strength and conditioning, many Grapplers especially BJJ practitioners still train like amateurs.

I have trained many fighters; many are weak and don’t want to make commitment to strength training. I mean real strength work; heavy squatting, deadlifting and benching; triples, doubles or singles. They are not unlike other sport athletes that overdo the skill work and neglect the strength component. When they strength train it tends to be the metabolic cardiovascular type that actually zaps their strength. It makes you feel good-like you’re in shape but does nothing to improve your strength. BJJ fighters are the worst offenders; all they want to do is roll, roll, and roll. I get it; the skill work is extremely important but by gaining strength your skill ceiling is able reach higher levels. Given two athletes with similar skill levels, the stronger one will usually prevail. Ask Frank Mir. When he fought Brock Lesnar, he was the more superior technically skilled athlete but was severely overmatched in the strength department and lost. That is why he sought my help for the Cheick Kongo fight. He realized a deficiency in his game. Unfortunately I’m not sure he committed for the long haul after that fight.

It all starts with strength. It is a confidence builder.

I’m not saying don’t do functional exercises or metabolic training. They both have their place in your training tool box but you can only get so strong balancing on Bosu balls (is that Functional?). The basis of your offseason should be improving your strength in areas that will help correct your weaknesses. Increasing absolute strength in pulls, presses, and squats will correct a lot of weaknesses.

I was hired to train the Azerbaijan National freestyle wrestling team before the Rio Olympics.

They felt that they were superior technical wrestlers as compared to the USA but lacked the strength and conditioning that the USA wrestlers displayed. I was told to “build tanks”. So I implemented a block periodized strength program that focused on eccentric, isometric, and concentric muscle contractions that occur in a wrestling match. I then peaked them out with a power and speed contrasting program before the Olympics. The end result was 5 overall medals, more than any other country. If it wasn’t for an injury sustained by our heavyweight the week of the matches we would have won medals in all classes. 2 wrestlers on the podium he would 10-0 in training camp earlier in the year. Did we do some distance and metabolic conditioning? Yes we did. We also did sprints and agility drills. But the emphasis of the program was to get them stronger. We strength trained 4 days a week in the morning followed by wrestling in the afternoon. Training camps were typically 2 weeks long with 5 to 7 days in between camps some of the wrestlers were resistant at first; or their personal coaches were, but after wrestling in some preliminary competitions and feeling the strength improvement, they were sold as was the Russian coach that was in charge of the team.

As we try to make training unique, cute, fun and entertaining but it all starts with the basics of improving strength first to improve sport performance. The outdated mindset of many combat athletes must change; strength training done properly will not slow you down, get you “bulky or tight”. It will do the opposite.

I also believe the CrossFit methodology of training is wrong.

It gets you to be great at performing about 70% of maximum. I was a World Champion Powerlifter and a 7 time competitor-2 time finalist in the ESPN WSM. I didn’t try to make my athletes be powerlifters or strongman. CrossFit is a sport. Not a performance enhancing program for athletes. Can some segments be used to help sport performance? Absolutely, just like powerlifts and Olympic lifts can be utilized, but to implement a wholesale CrossFit program for combat athletes is a mistake. But I see fighters training that way because they feel like it mimics the length and pace of a fight. They go to camp for 4 weeks or longer and strictly do round length simulation metabolic training and it depletes any strength work they have done previous to camp. All combat athletes at every age are worried about fatigue. The best way to combat fatigue is to perform at maximum intensity recover (intervals) and repeat. The stronger you become the higher the level of intensity of the interval.

Maintaining strength during weight cut before the fight is also essential, all the more reason strength training should not cease during fight training camp. Training percentages used may have to be adjusted to accommodate the weight drop but low volume high intensity strength training will help to hold on to strength while bodyweight drops.
All disciplines of mixed martial arts can benefit from improving strength. Ask yourself how much time are you devoting to the one aspect that will help raise the level of all the areas of your fight game? It’s not complicated, stick to the basics. Stick with developing strength.