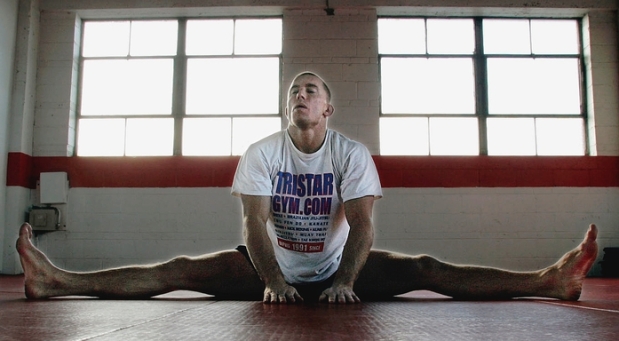 Former UFC welterweight champion Georges St Pierre was one of the best conditioned athletes in MMA history. His training routine consisted of gymnastics for dynamic dexterity and coordination, Power training for explosive bursts, and boxing for accurate and powerful punches.

“I always train with better wrestlers than me, better boxers than me, better jujitsu guys than me,” Georges St-Pierre says. “When you train with people who are better than you, it keeps challenging you. By challenging me it makes me better. It makes you better develop your skills than someone who is always training with the same people over and over again. I have a very good team.
“When I go there [other training gyms] I play their game. When I wrestle a guy like David Zimmerman, I don’t have the best of him… I wrestle well but not the best of him. But when I get into the sport and have myself in a takedown position, the guy that I’m fighting isn’t a guy like Zimmerman. It’s the same thing in boxing, jujitsu, Muay Thai. So that’s why I try to train in every single discipline with the best guys.”

“I tend to eat as well as I can, but I use the diet to lose weight,” Georges St-Pierre says. “I weigh 185 pounds, and I have to be 170 on the scale [for the weigh-in], so in four days I’m going to lose 15 pounds. I’m gonna cut down the carbs, the sodium, and I’ll be eating a lot of greens and a lot of protein. By doing so, I’m going to restrict myself and make the weight. And after the weigh-in, I’m going to do the opposite by eating a lot of carbs and get all my weight back.
“My favorite food is tourtiere, a French Canadian dish, but unfortunately I can’t eat that when I’m cutting my weight down. It’s going to be for after the fight. My mother makes the best tourtiere in the world.”

“Normally, when I don’t have a fight coming up, I always train,” Georges St. Pierre explains. “I train six days a week, two training sessions a day. I box, go the gym and I have a lot of great training partners. I train with guys who are going to the Olympics, and I train with some of the best jujitsu guys in the world. In every type of training I do, I train with better guys than me so I always develop my skills. “When I have a fight, and the fight is getting closer, let’s say a month before the fight, I don’t train by just boxing, or just wrestling. I train more MMA, and what I mean by that is I make training partners come here and I mix all the training together, like kickboxing, submission, takedown on the ground, to really give me the reflex and the momentum for the fight. “I do boxing, wrestling, Muay Thai, jujitsu — that’s the four disciplines that I do. I also do sprinting and strength-conditioning. “If you want to be a tough MMA fighter, you have to have a background in something.