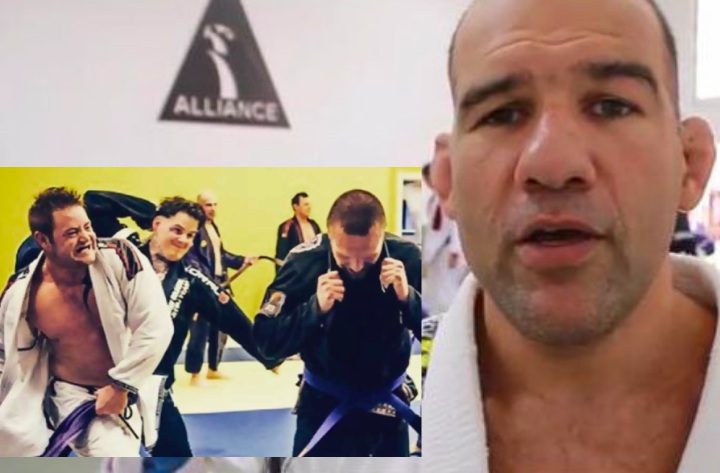 Running the Gauntlet is a tradition that more and more academies abandon every day. Most modern academies abandon it because it’s a legal liability and to put it bluntly, it’s bad for business in a world where you can get to a 2 stripe brown belt level over the internet.

Many jiu-jiteiros call this torturous procedure a “rite of passage” and believe that it creates a unified team front.

Circle of Death’ Belt Promotion, Even More Hardcore Than the Gauntlet:

Gurgel is one of many BJJ instructors that is now against the gauntlet eventhough he used to do it back in the days. He expressed his opinion on his blog (translated from Portuguese):

Perhaps my biggest mistake and that must have cost me hundreds of students was The Gauntlet .

It all started as a joke in my gym at the Federal Club where I began teaching classes alone in 1988, (my master’s gym did not have this custom), I’m not sure where I got this terrible idea but the fact is that I used it for a long time and it has spread in jiu jitsu at a frightening speed, possibly other teachers like me started on their own and maybe as many others I have somehow influenced, to those I ask my sincere apologies, however the fact is that this ritual became part of the jiu-jitsu academy’s environment, the students endured it and even liked it because it seemed like a test like the ones we see in war movies where military barracks prepare their soldiers to face the difficulties that are to come,the students felt worthy of that new belt for having endured that beating that in the end had no purpose.

Time passed and jiu-jitsu academies turned increasingly to the competition and always prioritizing the participation of tough students felt no need to change the promotion party after all being tough was almost a must, and what was a simple beating for a guy accustomed to suffering in jiu jitsu training for competition?

One fine day I had an experience that made me rethink everything in this respect, I had been studying and every day more understanding that we were moving away from what jiu jitsu needed in terms of offering jiu jitsu for everyone and not just for the class but at a promotion party we had the presence of the mother of a student who would be promoted on that day, she was at the beginning all proud probably expecting a glamorous ceremony (alias as it should be) when suddenly the “Gauntlet” was formed , shouts of “Uh he will die” were chanted by all the almost 100 students who were on the mat, and there was the kid going through that insanity, his mother was terrified and told his father that they should report it in a police station! The father was torn between the pride of seeing his son win the situation and conquer the dreamed belt and the one of calming the mother, the son was promoted and his happiness caused that the mother gave up to launching a complaint and only accepted to congratulate the son, but that for me was the straw and the proof that something very wrong was happening and that it was necessary to change.

Never again did I allow this to happen in my gym, but now the test is not resistance but technical, the belt exams have taken the place of the gauntlet and the result is arguably better, my students are submitted to a fair test and which confronts them with what really matters if my school is managing to teach them a good jiu-jitsu.

This change has not happened in isolation and therefore I can not attribute the growth of my academy to her alone, I have already told you about some changes that I have implemented in my school and that all together produce the result I have today, but I have a certainty, the gauntlet should be abolished from all jiu-jitsu schools in the world.