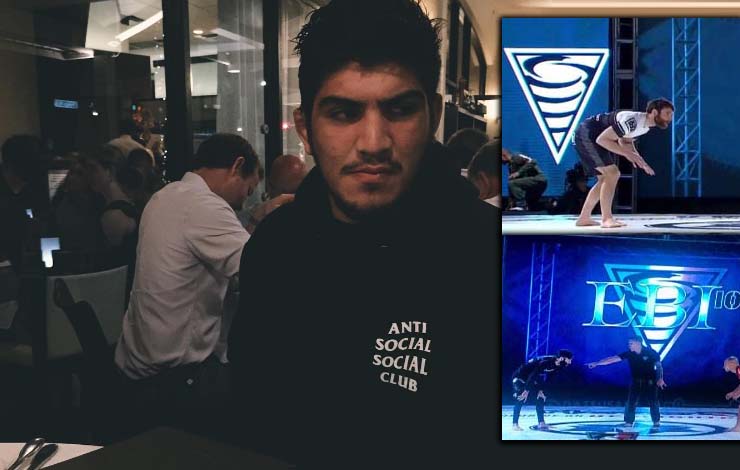 Dillon Danis may not have been reached by the news of Danaher Death Squad Marcelo Garcia truce.

He appeared on the MMA Hour and said as much! Clearly such a close connection to the loudmouth extraordinaire Conor McGregor has it’s backfalls.

However Danis is definitely ready to step into the MMA spotlight and leave different jiu jitsu rulesets behind. In fact he had chosen words about EBI as transcribed by flograppling:

I like the promotion, I like Eddie Bravo a lot but the ruleset is not my favorite. It hurts the pure essence of jiu-jitsu. Where these guys start on people’s back and submit the guy and act like they actually submitted them. I think that’s bullshit. I would compete in it and I love Eddie Bravo and think it’s a good promotion but the rule set needs to be changed.

He’s adamant that a false sense of security has been instilled in Gordon Ryan and the gang by a peculiar ruleset:

The tournaments that make these weird rule sets give guys a false sense of confidence thinking that they are the best when the aren’t really the best. There are guys who win these tournaments who are really good, but some guys think that starting on people’s back and chocking them now they are the best in the world. Everybody knows ADCC, that’s where it’s at. That’s the real stuff. ADCC and IBJJF Worlds. Those are the two biggest, if you’re a jiu-jitsu guy you know that’s the best.

Meanwhile Gordon Ryan was singing the old tune on his instagram:

One by one they will fall by the hands of the king. Opponents will become servants, haters will become fans. This is all just a consequence of being the greatest there ever was.

You guys can formulate whatever opinions you want. Geo won the match, period. I refuse to make excuses for our loss, and I expect Eddie to do the same.