Chess on The Mat: What BJJ Can Learn from Chess 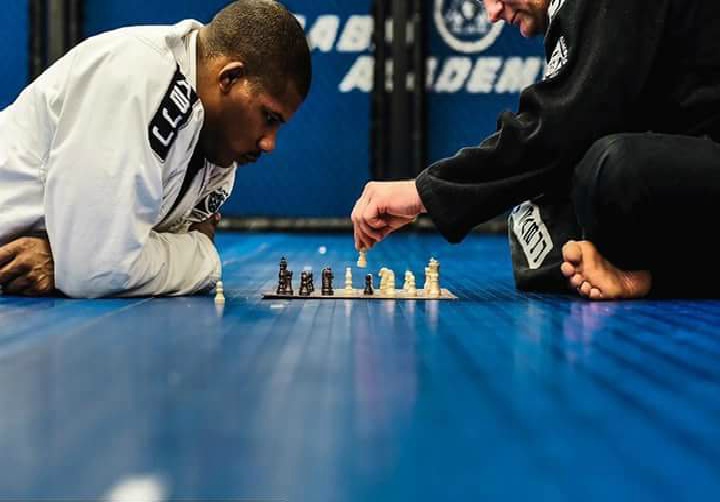 When I talk to people who start their BJJ adventure (in my opinion passing knowledge about the very essence of BJJ is as important part of training as a every technique) I often use a „human chess” comparison. Explaining new techniques and issues it is worth working on examples and references to everyday life. Chess motif sounds good, is popular and often used in graphics of BJJ websites and youtube highlights’ titles. But do you really know what’s the matter with this particular comparison? And even more important question: does everyone understand what BJJ is really about?

I’m not a chess master. Nonetheless I guess I understand this game as much as I understand BJJ and I am fascinated with the number of similarities and complexity of both arts. A Chess game does not follow one specific scheme and its rules do not suggest a way to win. Similarly in Jiu Jitsu a way to finish the battle with success and gain point advantage will depend on a „player” and results from (or at least it should) a chosen strategy.

Knowledge of rules and all possible moves of pieces does not make one a chess master. That’s right. You can read about all BJJ rules and learn them all by heart. You can check out balacha, kimura and triangle on the internet and try it while fighting with your friend on the carpet. Yes, you can. However, what does this knowledge mean if one gets his or her blue belt after one year of systematic, hard trainings at the earliest? Absolutely nothing.

Knowledge of single techniques is worth nothing if we do not understand the broader philosophy of concrete positions, connections within techniques and rules of applying them. If you come across a chess game manual, you will probably find strategies how to open the game and defence variants. They are often named with surnames and nicknames of players, who used them for the first time during a game. Sounds familiar? So that the battle of two BJJ players was not a pointless and awkward scramble, one needs a solid knowledge of both, offense and defence techniques.

It is highly probable, that while studying a chess game, one will encounter a crucial note: ‘You can reach some of the combinations by many different ways, making moves in DIFFERENT sequences. Therefore you should not learn these variants but understand the logic of specific moves.’ In my opinion, it is one of the most important BJJ rules. There exist thousands of variants and versions of techniques. One would have to be a real ignorant to assume that there exists only one and true solution. There are as many concepts and ideas as competitors. The clue is to understand what is going on in a given phase of a fight and to get familiar with its rules.

Let’s take it a step further. Gambit. Did anyone hear about something like this? It is a chess opening consisting in sacrifice of one or more pieces in aim to gain a better attacking position. If you train BJJ and an above definition makes sense to you, you are for sure the one who knows what BJJ is about. Backing off from the seemingly better position or even giving it up in aim to have a better start with another technique is anything else than a thing very characteristic for chess masters – thinking a few moves ahead. It is said that the most skilled BJJ masters know what you will do before you even think of it. However to acquire this skill you have to take your time on a mat… The more time you spend on it, the more sense this text makes to you.

The last and the most important part of this text considers the similarity of a defeat in a game. No matter if you are on a mat or ahead of a chessboard – you cannot learn how to play/fight while not losing. It is impossible to make a progress while not trying. Numerous trials mean also numerous defeats. The sooner you realize that you cannot achieve an advanced level without defeats, the sooner you will start making progress. And in my (very personal) opinion BJJ/chess game is not always about victory, but about the very pleasure derived from a game or fighting. So forget your ego and take your time on a mat!