Can Brazilian Jiu-jitsu Really Save You Against Bigger Opponents? 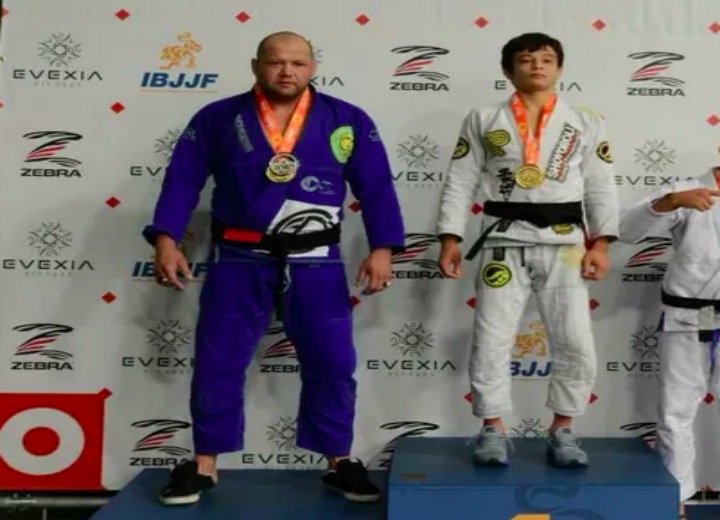 As you know, Jiu-jitsu can be adapted to anybody type and each of them have something in advantage, for example you probably heard or thought comments such as “This guy has long legs, once he learn the triangle he will be great” or “This guy is super flexible, imagine how tough will be to pass his guard” and so on. But what do you hear or think about small people? Maybe “Hummm, there is a small guy, let me warm up with him” or “Yeah, small guy in the mat, let me try my new techniques on him” and some people even think “The teacher put me against this small guy? No way I will let him beat me, I will crush him” LOL

Of course those are just examples, maybe you never said anything like this or, at least, not exactly that way, but the truth is that small people, like me, go over some hard time in the mats. Many of them give up because of that or get injuries in the process what also cause them to stop too early. The result of that is almost like a natural selection, the ones who “survive” this initial time, 99% of the time become super technical.

That is another reason why most small guys play bottom, just because they have no choice, since during training people usually put them on their back and they need to survive from there. 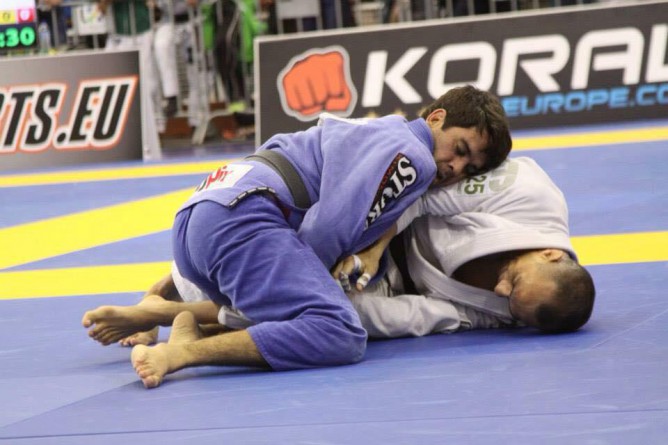 People ask me a lot how to handle bigger opponents and is hard to give an answer to that without studying each case. But in general the position you have a bigger chance against an opponent that is much bigger than you is taking his back. If you notice, once you are in someone´s back, even if you are much smaller, it won´t make much difference, he should not be able to work his way out of there with strength.

Now try to mount a big guy. Chances are the he will just “upa” you out of there.

My master Rodrigo Comprido Medeiros, who have train Brock Lesnar´s in the ground for UFC, often jokes with me saying that now he understand how I felt all those year of training, since the size difference from Comprido to me is almost the same as from Brock to him.

In 2003 during the Personal Training Program in US (something that I apply in different academies in the World to help them raise their technique level faster), couple weeks after my first World title, I was rolling with a big white belt who was as big as a basketball player, he knew very little BJJ and I was only defending myself not to get hurt, so he was able to get many superior positions on me. Later on that night I read a comment in the internet from a purple belt asking “Can a light BJJ World champion beat a big white belt?”. Obviously the person who wrote that knew very little about Jiu-Jitsu, but just to prove a point, the next day I made sure this guy was watching when I rolled with the big white belt on “competition mode” and as a result I tapped him a few times from the back and even got him in an arm bar when he got tired. I never hurt him, this would be non sense, but I had to give my best to pull that off.

If that would happen today, I would just ignore it completely. Why? Because I was in great risk to injury myself just to prove a point to a person that I barely knew. Nowadays I just know better.

Now let´s just imagine that this big guy, that back then was a white belt, kept training and possibly today was a purple or brown belt. Let´s also imagine that in theory I would still be more technical them him, but now he has besides the size and strength a good amount of technique on his side. Could I beat him still? No, probably not. But would it be impossible to beat him? NO, not impossible, but once the technique reach a similar level, the size and strength will make a good difference.

I honestly believe that Brazilian Jiu-Jitsu is the only martial arts that gives you a real chance of success against bigger opponents. If in a self-defense situation you have to defend yourself against a bigger guy who doesn’t know any BJJ, I would say your chances of success are enormously bigger than his.

In Brazil we have a saying that if an “advice was good, people would sell them, not just give away”, but I will give one free advice to you: if you made all the way to the end of this article and you are not a small guy, try to learn as much as you can from them. Just think that if a light guy has good enough technique to handle a bigger guy, when you get older and can no longer count on your strength, those techniques the way they apply may get you still going and having fun.