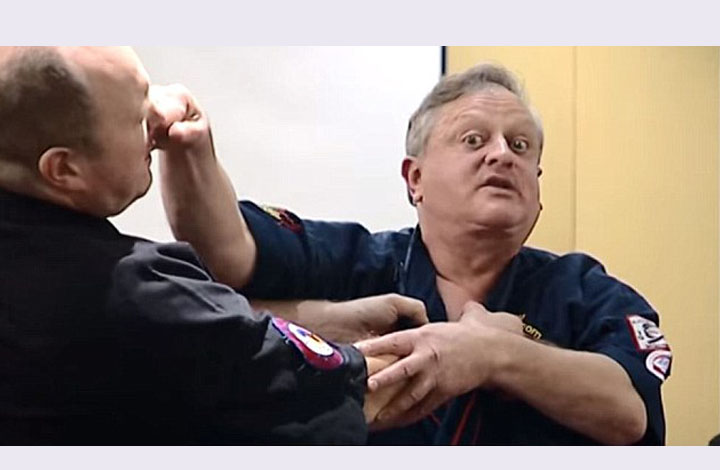 There are many great technique videos out there but sadly quite a few rotten apples as well. One such case offers to help you knock out an adversary without touching them

This is footage from Discovery Channel’s “Is it real?”. A tip off would be that that’s a segment from the episode dedicated to Sufi mystics, Yoga masters, and Chi manipulators.
George Dillman is a chief instructor of an organization counting approximately 85 schools housing over 15000 students world wide. The original name of this skill was Ryukyu Kempo to-do jitsu but Dillman claims these standard parts of Ryukyu Kemp contain hidden meaning in these kata and understanding their mastery will result in becoming a complete and deadly fighter.

Typically Dillman’s techniques are performed or demonstrated on his students or on other persons who are “believers” for all intents and purposes. So it is common to watch Dillman or his instructors “strike” someone with what appears to be a firm poke only to see the opponent collapse to the ground as if he had been just hit by Mike Tyson.

Of course there are other concerning materials like this vintage Self Defense Video:

This spectacular video suggests you aim an elbow at the nose of an assailant or alternatively pinch them in the thigh. We’ve yet to see a pinch to the thigh getting anyone to tap out and or leave you alone.

Aikido is another offender on our list. The only benefits are learning how to fall and wristlocks. The philosophy of allowing force to go through you is basically very flawed. When we also account for the fact that there are no live scenarios where you can hone your skill it gets worse.

Then there’s also this. The art of utilizing improvised weapons. This clip is from “Hoda Korosu – The art of imrovised weaponry” as demonstrated by professor Ronald Duncan. It can still be bought?! It might just be the worst way to spend 20$.

Viewers discretion is advised for this next Rapists Beware video.

This materials suggest you try to gross out your attacker by any means necessary and a variety of other stuff you would’ve never thought up on your own. Or Would you? This material may or may not have inadvertently inspired the “50 shades of grey”

Then of course there’s the Shock Scream Run series