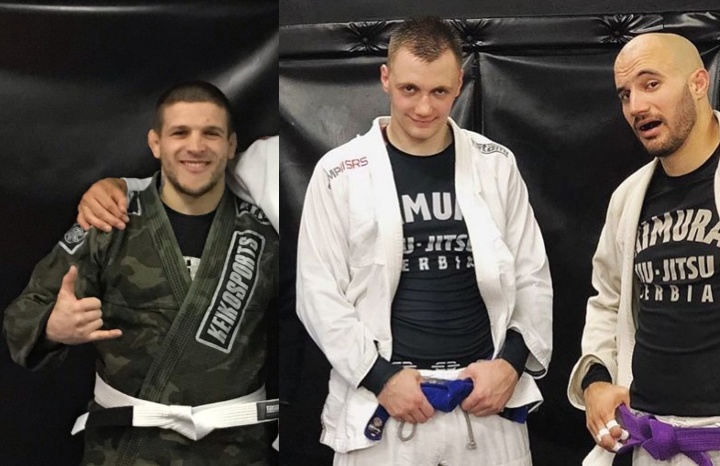 Some recent post-training conversations regarding how best to progress in Jiu-Jitsu came about while grabbing eats at our usual spot the other night.

Since then, I’ve carved out some time for moments of reflection on the learning process best suited for the average student. I am well into my second year as a black belt and as they say, it’s the equivalent to finally reaching that plateau that you assumed was the summit, only to see how high the mountain really is. Many years ago I read an article by SBGi black belt, Matt Thornton, where he used the analogy of navigating a map to help explain progression through the belt system, and that really helped me throughout my Jiu-Jitsu education. We all have our own ways of perceiving the belt system and I hope this is helpful to you. Please note that I have left out my views on the influence of competition and learning through alternative media, such as YouTube…I may tackle those later.

For those being introduced to Jiu-Jitsu and wrapping that white belt around their waist for the first time, some consideration is suggested, on the part of the student as well as the instructor. Often I see white belts attempting to pursue exotic guard styles and risky submissions. I can only assume this is a side effect of an understandable passion for the martial art and sport. However, restraint and focus are important during this stage of learning. As a student, the time spent in your white belt should be spent on fundamental techniques, centered on core concepts. It is really about competency…see and do. We employ many movements that are unlike anything you would normally practice on a daily basis, so this is the time for the student to familiarize themselves with such movements. The teacher should provide a set list of fundamental techniques and expectations that the student can follow in an objective fashion. As much as I am one for personal expression with ones techniques and style, this needs to be set-aside during this time. I really hate to come off as a buzz-kill, but be patient, the opportunities for carving out your personal touches will come later.

If I could sum up the blue belt phase with one word, it would be ‘Accumulate’. Once the tutorial phase of the white belt is over and the student has transitioned into a fully capable grappler with a good base, a blue belt should be around their waist. Aside from following further expected learning/curriculum, now is the time to sample as many flavors as possible. Gather technique after technique, see what appeals to you and add favorable options to your game. Now is the time to play with all those exotic guard styles that dazzle you. The goal during this time is to find out who you are and what feels right for you. I would like to add that during this time, I feel it is very beneficial to acquire a mentor, someone to guide and push you to reach higher and higher heights. My preference is that this mentor be a purple or a brown belt.

is truly a milestone in Jiu-Jitsu, and in my opinion, is the most important step. This marks that the student has established a style all their own. As unique as a snowflake or fingerprint, a distinctive style should be appreciated when watching them practice that separates them from the rest. A friend once told me that “purple is when you begin to express yourself through Jiu-Jitsu”. The focus during this phase should be on perfecting your chosen techniques, getting them razor sharp, as well as testing them in action in an ascending order through the belt system. At purple, the student should be a threat to almost anyone, and should be taken seriously by even the most seasoned black belt. As an instructor, this is also the phase where the purple should be introduced to the teaching process. As stated above, I feel that mentorship is an important element for blue belts maturing towards their purple. But I also feel that the very same mentor-apprentice relationship is beneficial for the purple belt mentor. The apprentice benefits from not only being with a more skilled partner, but also gaining elements of the purple’s unique style and set of chosen techniques. The mentor gains experience, not only teaching, but also learning to validate their own chosen techniques while attempting to explain each detail and nuance. This pretty much sums up purple to me.