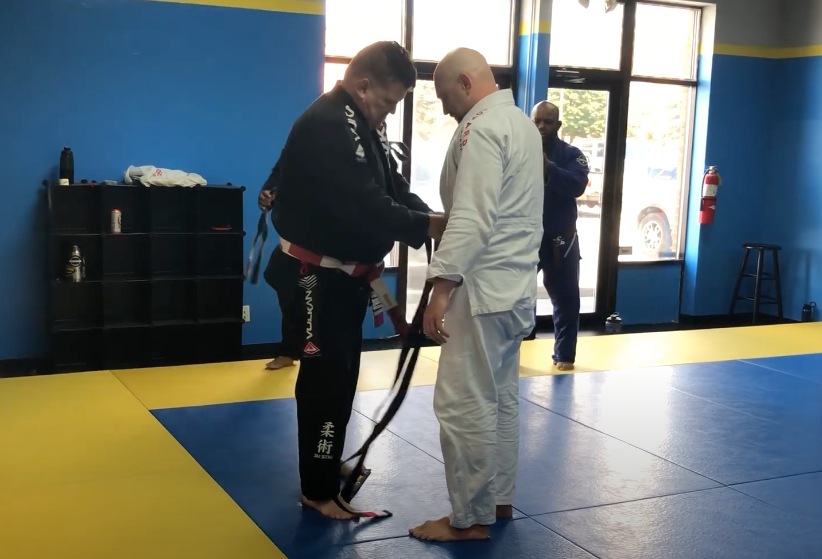 Marc Laimon is a grappling and MMA coach who is a black belt in Brazillian jiu jitsu. He started training at the Gracie academy but left after a few years to continue his BJJ journey at Beverly Hills Jiu-Jitsu club. He is the original founder of the world-famous Cobra Kai BJJ academy. Laimon also famously defeated Ryron Gracie in a grappling superfight.

Laimon publicly voiced his opinion on the Gracies and more specifically Royce Gracie in this interview:

MMAyou.com: How would you rate Royce?s BJJ and MMA skills?

Laimon: It’s pretty poor. It’s actually sh** if you want to not mince words, it?s pretty awful. Matt Hughes SMASHED him on the ground. Took him down, passed his guard, took his back and mounted him. I think Royce is maybe like a good blue belt, maybe a purple belt. I don?t think he?s very good at Jiu Jitsu at all. He happened to be doing it at a time when the level was so low, having Jiu Jitsu was like having a weapon. It was like having a gun or a knife in a fight. People don’t know what’s going on, they didn’t know what to do, they get caught in stuff. Once people started to study the game, video tape doesn?t lie, once you start studying footage, and understanding the principles and concepts of Jiu Jitsu, you realize it?s nothing magic. It?s just you gotta know where to put your arms and what to do.

You see Matt Hughes a guy from the Midwest, who?s a wrestler, basically made Royce look like a white belt. I just think his level of Jiu Jitsu is very very low.

There is more to the conversation than what is shown in the video below (TUF Season 4). The whole sequence starts off with Matt Hughes asking Marc Laimon if he enjoyed his recent fight against Royce Gracie. Marc Laimon’s words were as follows: “I knew his jiu jitsu sucked!” Royce may have been dominated by Matt Hughes at UFC 60, but Matt Serra is taking issue with Marc Laimon’s disrespect to a legend.

Yes, Matt Serra studied under Renzo Gracie, so he’s obviously taking it personally. But, in all honesty, most MMA fighters and fans will say that Royce is the one who “started it all.” A lot of jiu jitsu fighters say that Royce is the reason they got into the sport. It’s possible that Marc Laimon has a job teaching jii jitsu today because of Royce’s impact on the sport. Marc doesn’t have to be a fan, but can’t he show a little respect? Marc Laimon has every right to have his own opinion, but those are some pretty harsh, disrespectful, and arrogant words from a jiu jitsu coach.

Din Thomas (cast member on TUF 4) said, “My respect for Matt Serra went up a couple of notches”