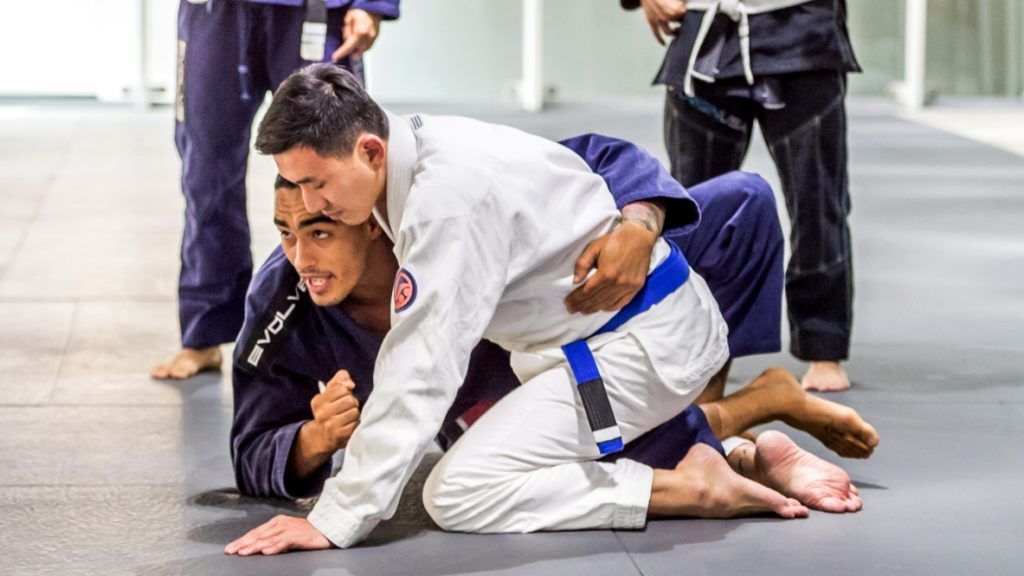 Today’s BJJ 101 lesson will cover what is arguably the most fascinating of all guards: Half Guard.

Half Guard wasn’t always a prominent guard or position in Brazilian Jiu-Jitsu. In fact, many old-school practitioners still refer to Half Guard as Half Mount, because they believe that it is nothing more than just the halfway mark for your opponent to achieving a dominant top position. It was once a position that interested nobody. Getting caught in Half Guard was seen as a desperate, defensive move to slow down the eventual guard pass.

However, due to the innovation of modern grapplers, Half Guard has evolved into an attacking guard that can be used to execute reliable sweeps and sometimes submissions.

Along the way, new variations of Half Guard have surfaced, and you will now see competitors utilize many different strategies and techniques from the position.

Today, we’ll provide a detailed look at all the fundamental aspects of Half Guard, showcase some select tactics, sweeps, and submissions that can be executed from this position and help you gain an edge over your opponents and progress your Brazilian Jiu-Jitsu skills.

Those who are more comfortable in Half Guard won’t be rushing to reclaim guard. Instead, they will be attempting to execute sweeps or submissions from this position.

To do so, a Half Guard player needs to disrupt his opponent. He can achieve this by scooting deep underneath his hips and start threatening with sweeps and attacks. There’ll need to be some form of upper body control to endanger him, though. Whether that’s an overhook or an underhook, this upper body control will help prevent him from controlling your head and flattening your back.

The ideal way to play half guard is on one side of your body.

A fundamental rule of Half Guard is that it helps to be on your side. Remember, your opponent wants to flatten your back and keep you pinned to the mat. If this occurs, you will lose much of your mobility and will be unable to execute many techniques. Another tactic to remember is that you should dig for the underhook with your top-side arm. That’s often the same for the overhook, too.

If you can secure this position – even without an understanding of particular sweep techniques – you are already well on your way to disturbing your opponent’s center of gravity and forcing him to rebalance regularly, rather than finding ways to progress past your guard.

As this is a BJJ 101 lesson, we aren’t going to dive into the specifics of every Half Guard variation. Instead, we’ll quickly note each of these hybrid positions so that you can recognize them in the future.

Some of the most prominent Half Guard variations that you will encounter are Deep Half Guard, Z Guard, Lockdown, Half Butterfly Guard, and even X Guard can be considered a form of Half Guard.

Some of these positions are more attacking than others. For example, Eddie Bravo consistently pulled his opponent into his Half Guard so that he could secure the Lockdown and begin setting up advanced sweeps to get to top position.

Over time, you will learn, understand, and master these positions.

By developing a seriously effective ability to sweep your opposition from Half Guard, you won’t feel uncomfortable about being on the bottom anymore.

While there are many sweeps to learn from each of the different variations of Half Guard, we’ll focus on two simple sweeps that allow you to progress to a dominant top position.

In this short demonstration, Stephen Kesting describes this Foot Grab Sweep as “the first sweep you should learn from Half Guard.” When executed correctly, this sweep can help you move from being stuck in an inferior position to top side control.

What Is Half Guard?

Half Guard is best explained as a guard that enables control of a single leg of your opponent using both of your legs, which occurs when they are halfway past your guard.

There are many variations of Half Guard, and each hybrid has a list of advantages and disadvantages that primarily depend on whether you wish to attack or defend.

For now, though, we will only discuss the common Half Guard position.

If you are still learning the concepts of Half Guard, your primary objective should be to recover Closed Guard or Open Guard.

Transitioning back to Closed Guard or Open Guard helps to prevent your opponent from passing your guard and removes you from an otherwise dangerous scenario in which your opponent is inching closer to gaining a dominant top position.

Even if you have the world’s best control in the Half Guard position, it’s not ideal to be stuck underneath a bigger and stronger opponent for any period. This is why your priority needs to be removing yourself from Half Guard and gaining extra control of your opponent.

Your opponent will be trying to outmaneuver you, smash past your guard, or a combination of both. To pass your Half Guard, he will likely need to flatten your back, stop you from achieving an underhook or overhook, and gain control of your head and upper body.

Therefore, it’s essential to use proper framing techniques to stop him from crushing your upper body and working into Side Control or Full Mount.

You can learn the basics of framing in this video by Tom DeBlass:

Kurt Osiander also shares a must-know Half Guard sweep in the video below. This sweep results in toppling your opponent and securing Full Mount.

If you wish to add more useful sweeps from Half Guard to your arsenal, we recommend studying “5 Essential Brazilian Jiu-Jitsu Half-Guard Sweeps” by Evolve University:

There are not many submissions available from half guard, and you probably shouldn’t crazily pursue submissions from the position. Remember, it’s always a good idea to regain Closed or Open Guard, or sweep your opponent to gain a dominant position. In attempting a submission from Half Guard, you might allow an opportunity for your opponent to slide right into Full Mount or Side Control.

Two of the most popular submissions from Half Guard are Kimuras and knee bars. Other variations of Half Guard, such as Z Guard, can assist with setting up triangle chokes from the position. It’s also not entirely unusual to see a collar choke from Half Guard.

In the video below, Tom DeBlass explains the basic concepts of a Kimura from the Half Guard position.

To develop an advanced Kimura submission game from bottom half guard, this tutorial by Lachlan Giles gives incredible insight into how to counter an opponent’s best move.

That’s all for today’s lesson of BJJ 101: Half Guard. It’s now time to hit the mats and start practicing these techniques and strategies!