Ben Askren on World Cup: ‘For Your Son To Be a Man, No To Soccer, Yes To Wrestling’ 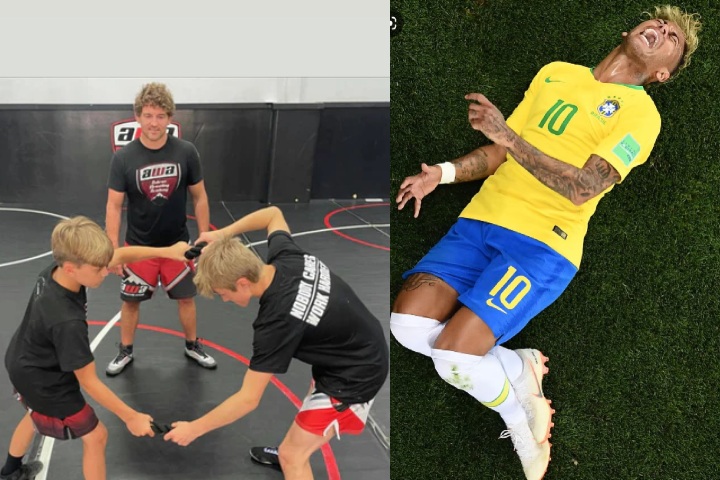 USA Wrestling Olympian and Former UFC welterweight/former One FC champion Ben Askren commented on the football/soccer World Cup and he was not impressed by the attitude of some soccer players:

“It was really the first time I watched soccer all year. I was really appalled when I am seeing all these guys falling on the ground, rolling around, crying. And then you know the worst part about it is, they show the instant replay and you can tell – most of these guys, they don’t even get hit, they’re faking it.”

“There’s no honor in faking an injury. There is no integrity because you are lying about it. And there’s no toughness because you are in front of millions of people, and you’re rolling around on the field, crying – CRYING – about a fake injury that never happened.”

“Listen folks, if you want your son to grow up to be a man, don’t have him run around on a field kicking a ball, get him wrestling.”

Askren finished his collegiate wrestling career with a record of 153–8, with 91 of those victories coming by way of fall. Those 91 pins put him at third on the all-time NCAA Division I pins list. In his four-year career at Missouri, Askren only lost to two opponents, Chris Pendleton of Oklahoma St. and Ryan Lange of Purdue. He was also a four-time All-American, including being only the twelfth Division I wrestler ever to be a four-time finalist. Askren was also nominated for an ESPY in 2007 in the category Best Male College Athlete. On January 9, 2012 it was announced that Askren would be one of six new inductees to the University of Missouri Intercollegiate Athletics Hall of Fame.

Askren is a brown belt in Brazilian Jiu-Jitsu. In December 2008, he went to Coconut Creek, FL to train at American Top Team main school where many top fighters train. He currently  trains at Roufusport in Milwaukee, where he is the wrestling coach.

Asken competed at the 2009 ADCC Submission Wrestling World Championship from September 26—27, in Barcelona, Spain. He won his first match against Toni Linden by arm triangle choke. He lost his second match to Pablo Popovitch, a veteran grappler he had trained with the previous summer, by figure four footlock early in the match. Popovitch went on to win the championship in the under 77 kg (169 lb) division.