“Beating The BJJ Rut”: Tips on How To Achieve a Black Belt in BJJ 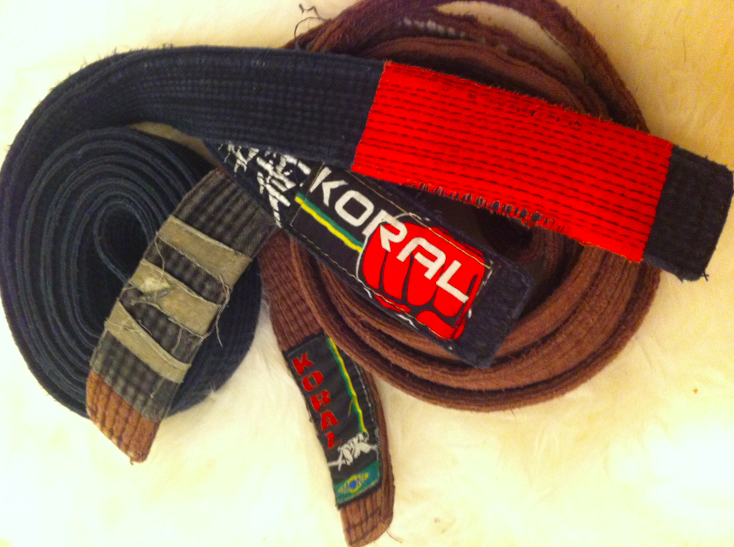 The road to BJJ Black Belt is long and difficult. Most people say it takes an average of 10 – 15 years to earn the coveted BJJ Black Belt. Comparatively it takes about six years to obtain an MBA (four years for a BA and an additional two for the MBA). The average student takes 8.2 years to finish a PhD and an average of 33 years old when they reach it! I earned my BJJ Black Belt in 2014, spending 13 years as a brown belt. You read that right, 13 years as a brown belt! I may have had the longest BJJ rut in history.

So, what is a Rut? A Rut is defined as, “A habit or pattern of behavior that has become unproductive but is hard to change.” I think the key words here are ‘pattern’ and ‘habit’. So a rut in BJJ terms could be, like me, being stuck in a belt for an inordinate amount of time. Now I can already hear someone saying as they read this, “I’m not training for belts!” Yep, I remember convincing myself at one point that I didn’t care about belts either. (All that really did for me was reinforce the idea and reality that I was not in fact moving forward.) The truth is, the belts really do matter in BJJ. Saying the belts don’t matter is like saying, “I’m just going to school for the fun of it…my grades, diplomas, etc. don’t matter!” The belts in BJJ are like markers on the road to let you know where you are along the journey. Just like in traditional schooling where you complete a series of coursework and then advance on to the next level, and after you’ve satisfied all of your requirements you are awarded a degree. Jiu-Jitsu works in much the same way, but maybe just a little less organized. The point is that Jiu-Jitsu is ultimately about the collection of knowledge and it’s successful application. In other words, you need to be able to apply your knowledge base in the real world. Now that I’ve convinced you that the belts really do matter and they represent the collection of knowledge and it’s successful application, it’s time for some tips on how to beat the BJJ rut!

1.Don’t be defined by where you ‘are’, but by where you are ‘going’.
In BJJ it’s hard to not define yourself by your belt. After all when you come to class and everyone is in a uniform and the only real separation between individuals is the belt. In all other aspects, everyone looks the same. The first thing someone does when they meet you for the first time on the mats is to look at your belt then ask, ‘How long have you been training?’ When I was spending my decade-plus as a brown belt for me it went something like this… Them: “How long have you been training?” Me: “I’ve been training for fifteen years and I’ve been a brown belt for ten years now…I’m actually trying to set the record for longest time at brown!” I became so entrenched in being stuck at brown that I made a sort of ongoing self-deprecating joke about it. It wasn’t until I really set my sites on wanting to BE a black belt that everything changed for me. If you’re a blue belt and want to earn your purple belt you have to start thinking and acting like a purple belt now. You can get a free lesson on what it takes to earn a purple belt by just talking to your teammates. Ask others what they did differently to get to the next level? Another important psychological step I took was to go online and pick out my BJJ Black Belt. I love “Koral” brand belts (my brown belt was a Koral) and I took the picture of it and made it the home screen on my phone and computer. This helped me create some mental clarity on what I wanted I was trying to become, a BJJ Black Belt. This small simple gesture was a great daily reminder. Basketball great Michael Jordan is known for taking the game winning shot in his mind long before he did it on the court.

-Pick out your next belt before you are even promoted!
-Spend some time daily visualizing yourself moving and training like the level you seek.
-Model success – Study those who have already accomplished that which you seek to accomplish.

It’s hard sometimes to watch your teammates who started way after you started, progress past you. I know firsthand what that feels like. My longtime friend Ken Kronenberg who started BJJ on the same day I did earned his BJJ Black Belt seven years before me. (It literally came full-circle in 2014 when he promoted me to Black belt) Over the years I also saw six students who started with me at white belt (I relocated and they continued training elsewhere) become BJJ Black Belts while I was a brown belt. That was a tricky one emotionally for me. I was so happy to see my former students and friend’s progress, and I was sad that I was still stuck! It’s hard not to compare yourself to others in your BJJ class. But instead of creating a “you vs. them” mentality look at your teammates as your best resource. BJJ will always give you instant feedback. If a technique works you immediately know, if it doesn’t you really know. But just getting tapped out over and over doesn’t do much for you mentally or physically. Eventually you need to get to the heart of the problem. Ask your teammates for feedback. If you are getting caught over and over and you don’t know why? Ask for more feedback!

Should you ask your teachers about belt promotions? My standard answer is yes and no. Yes, you can ask but it’s how you ask that matters. Never say, “When am I going to get my belt?” Instead you ask, “What can I be doing to improve my Jiu-Jitsu?” This by the way, IS the path to earning your next belt. (This path is all about you and has nothing to do with anyone else.)

Additional Tips:
-Watch and train with students who are a belt above you. See what they are doing to be successful in Jiu-Jitsu.
-Seek feedback! Ask what am I doing right, and what and I doing wrong?
-Schedule a private lesson with your professor to set goals and develop a game plan moving forward. 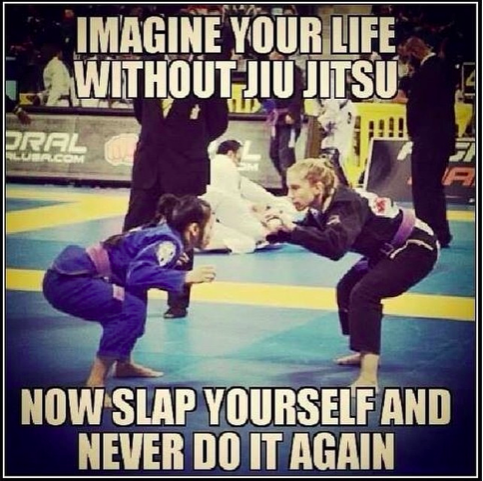 Momentum is everything in Jiu-Jitsu!

Lets go back to our original definition of ‘rut’. “A habit or pattern of behavior that has become unproductive but is hard to change.” Habits are hard to change. Far to often when we consider a big, new goal we immediately think of all the reasons why we cannot achieve it. We then allow these self-created obstacles to become so big that we stop ourselves from moving forward and we accept mediocrity and we become stuck. Think of what you do when you end up in a bad position when you are grappling. You don’t freak out and give up…you problem solve! You get your bearings, refocus your energy, and create a little momentum to open a new pathway. When I was 42 years old I had gained an additional fifty pounds of unwanted weight. My Jiu-Jitsu was suffering and I was too. Everything however changed once I got just a little bit of positive momentum. Like a good sweep or escape you need just a little momentum to get a lot of momentum. At this point I was going on 12-plus years at brown belt…I was literally stuck! But it all changed when I set a short-term goal of competing in my first BJJ tournament in ten years. This forced me to lose the additional weight and get myself to a healthy state. Over the course of about three months I was able to lose 47 pounds and compete and win a tournament. This was the momentum I used to continue competing and staying healthy and eventually earning my BJJ Black Belt in January of 2014.

Additional Tips:
-Have an accountability partner. Have a friend, spouse, girlfriend / boyfriend, children train BJJ with you. Make a deal with them that you have to hold each other accountable to the training. This means that whenever one person doesn’t want to train the other person’s job is to make sure that everyone follows through and does train!
-Find ways to create healthy, positive momentum. If you’ve never competed, then set a goal to compete in your first tournament.
Be a martial artist on and off the mats. Choose a healthy lifestyle off the mats (healthy foods, limited alcohol, no cigarettes). Treat your body and mind like you are a professional athlete!
-If you’re eating healthy and making healthy lifestyle choices, you are going to feel physically better when you roll. It’s IMPOSSIBLE to successfully gauge how good you are when your conditioning sucks!

“Fatigue makes cowards of us all.” –Vince Lombardi