Attacker Gets Schooled after Assaulting Man in Front Of BJJ Academy 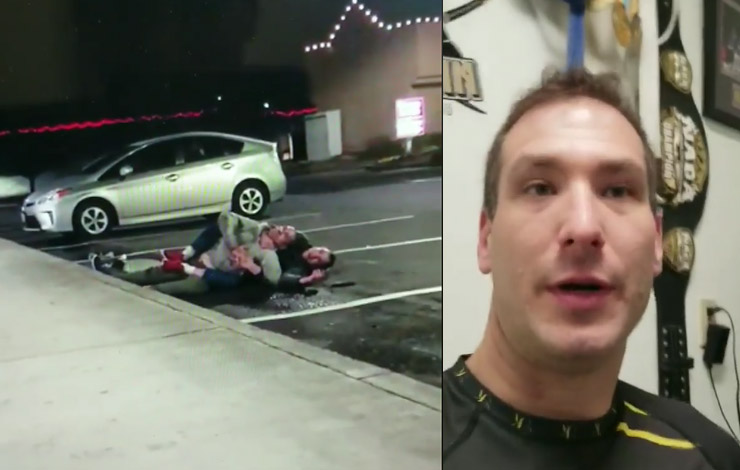 Jiu jitsu academy is no joke – this is something alleged attacker hadn’t considered when he attacked Rigan Machado black belt Adam Nadow in the parking lot of Fudoshin BJJ in Oregon.

This gentleman decided to attack me, in front of my BJJ studio. (This is an abridged version of what happened. Still too long)
He has been banned from the Village shopping center for harassing families and woman. I have heard of him, but never saw him in the center myself. He came within striking distance, threw a bottle at me and sat deep into a hay maker, I dropped for a double leg. Took him down and passed to a tight side control. Mounted from knee on belly, used pure BJJ to control him. He agreed to calm down and then tried to hit me “below the belt” I realized I had to call the cops as soon as I could subdue him. Turned him down on his stomach, and flattened him out. I set a rear naked choke, (Mata leaõ) I felt that I needed to put him to sleep to get my phone and call for assistance. He was obviously raging off of some substance, he was very…. VERY strong. Once I secured his back, and lock into his lapel for a possible bow and arrow (should I need it), I woke him up using my hooks to lift his legs. As he comes to, I assure him I do not want to hurt him, I am calling the police and to remain calm. About this time, my business neighbor from panache dance studio walked out and started filming. I was able to use my bjj to control a violent attacker (on some substance…… allegedly).

Bjj kept me safe and made it possible to control my opponent with very little damage to either party. Oddly he makes a reference to me “crossing my feet” from the back, (which of course I was NOT doing), so think he may have trained some bjj some where. I hope he gets the help he needs.

Come in and learn applicable self defense or attack a bjj black belt and the first lesson is always free,…..

And Nadow is no joke just watch him execute the standing choke in comp: