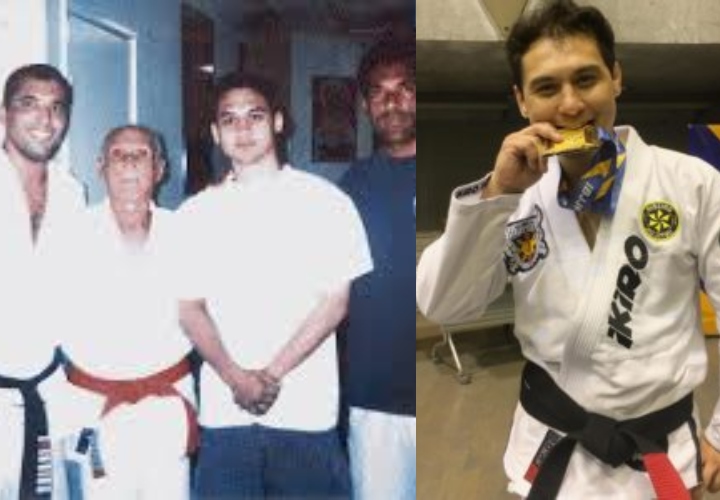 Brazilian Jiu-Jitsu is booming in The Philippines, a country in Asia with over 100 million inhabitants and highly developed MMA and martial arts scene. The pioneer of BJJ in the Philippines and South East Asia is Alvin Aguilar, a 3rd degree black belt under Saulo and Xande Ribeiro. Alvin’s BJJ story goes way back, having started training in the mid 90’s at the Gracie Academy in LA with the Gracies. He is also the president and founder of URCC, the first MMA federation in Asia and also the founder of Deftac/Ribeiro Philippines, the largest BJJ team in Asia. He is also a Arnis/Kali Master. BJJEE sat down with Alvin and talked about his interesting martial arts journey:

1. Hi Alvin, can you please introduce yourself to the BJJ Community?

Hi im Alvin Aguilar 3rd Degree Black Belt under Saulo and Xande Ribeiro. Im the founder of the URCC and DEFTAC. I have been doing martial arts since i was 9 and Jiujitsu for 27 years. Im the first Southeast Asian Black Belt.

I bought some magazines in Squadron Shoppe that talked about the Gracie Challenge. I then finally saw their Gracie Challenge in bootleg VHS format. I immediately said i have to train with these guys. This also worked well for me as i had to leave the Philippines to “cool off” from some trouble we got into for helping other people. I was already an Instructor in several martial arts by this time so i said ill go there and we will exchange techniques. It was here where i met Rorion, Helio and Royce Gracie. Rorion was very accomodating and got me to sign up for the unlimited classes. In the group classes i had to adjust as you do the techniques slow first and dont go for speed unlike the other martial arts i used to do. Royce taught the classes while Helio would just be there and would study the classes. Every now and then he would get up and say something in Portugese. I wanted to test Royce out really bad so i booked a private lesson with him. I was hoping he would see that i was a good fighter and we would exchange techniques. So when i got to the private room i was really disappointed that it was only a purple belt there sent to teach me. Me being a young punk, i asked him if we could just spar instead. He says no problem after a minute i was tapping already. Then i said to myself “it must be the jetlag” lets go again!! We went around 10x with the result being the same ALWAYS. That is when i felt the power and technique of Jiujitsu firsthand. I definitely had to learn this. 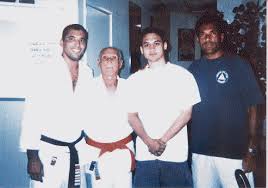 When i was a blue belt, i was in the Pekiti-Tirsia World Kali Congress. All sorts of practitioners from around the world were there. The Dog brothers from the US, Kali/Arnis guys from Canada, Mexico, Germany etc were all present. During the breaks we would exchange techniques. I was actively looking for ways to beat jiujitsu because whenever i would go with Black Belts their skill would always be too much for me. I needed some sort of an edge. It was always like fighting a superhuman. A lot of the guys here always had their own “counters” to jiujitsu as well as their Silat grappling.

Anyway during the congress there was this American Pekiti Instructor who kept talking down to us Filipinos as if we were his dogs. During meals all the foreigners would be in one long table and all the Filipinos would be in a separate smaller table. They would have better food and we would have endless tocino and daing lol. He arranged things this way. This kept on for quite awhile and his verbal abuse kept getting worse and worse. It was almost as if he was showing off to the other foreigners that he was OUR boss. One day it got too much so Sixto and Baste Carlos and I spoke to Tuhon Leo Gaje. We asked if we could lock him in a room and beat his ass. Tuhon refused and said we should fight him like real warriors. So i volunteered right away. Tuhon set it up so we could fight with sticks and anything goes. Everyone that day thought i was going to die. I ended up choking that mofo out in less than 10 secs. Afterwards they made me fight a 220 lb American. I was able to choke him also. It was this time where i said if a young brown 145 lb guy powered by rice can beat these monsters then this has to be one of the best martial arts out there. I fully dedicated myself to learning everything about jiujitsu after that day. 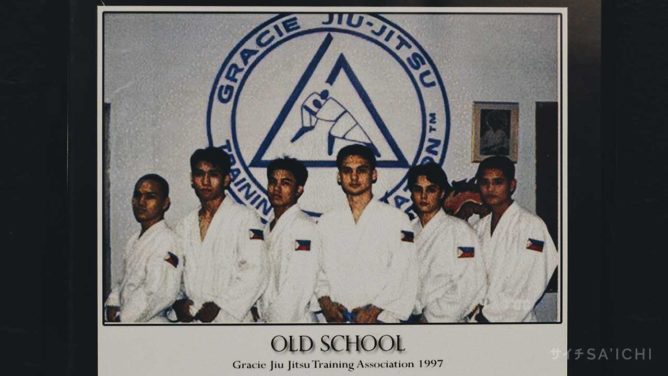 I started the Jiujitsu and MMA movement here in Southeast Asia. After i came back from the states i immediately started teaching all of my students jiujitsu as a white belt. The fame of jiujitsu started with all sorts of underground challenges and battles. Sometimes the losers never accepted their losses and things would escalate into streetfights, sticks, knives and guns. I myself was shot three times with an M-16. We really had to clean things up so we started the URCC. Now people fight but all are friends now. There will be so many great Champions coming from the Philippines in Jiujitsu. 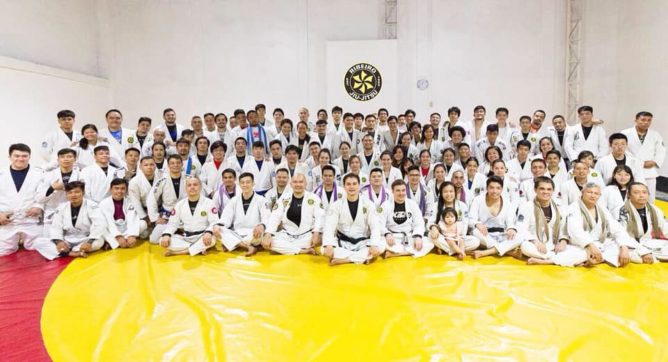 5. How is the training and mindset in the Philippines compared to the US?

6. What do you think of the current Filipino BJJ scene and how do you see it evolving?

ok this is what i see that is good here in the Bjj Scene
1.)We are getting more and more Black Belts.
2.)Most colored belts from the Philippines can defend their rank anywhere in the world.
3.)There are so many competitons to join so everyone can be actively competing.
This is the bad though.
1.)A lot of colored belts/Black Belts dont know how to defend themselves in the street. Ive seen this several times already.
the bad habits they see from the US is what they try to emulate here. First is the steroids which both boys and girls do here. This will create so many health problems later on which i hope they realize now. The second being the disrespect trash talking culture people do in the US. They can do that there because if you beat up someone you go to jail right away. Here its all in a days work sometimes lol. Seriously though, respect is something that must be maintained not just in martial arts but everywhere else. Even in the olden days warriors from opposing camps would always still show respect.

Lastly what i hate is that most of the higher belts here dont compete because they are afraid to be exposed. That is not what jiujitsu is about. In jiujitsu we must always learn to lose and be better because of it without worrying about foolish pride 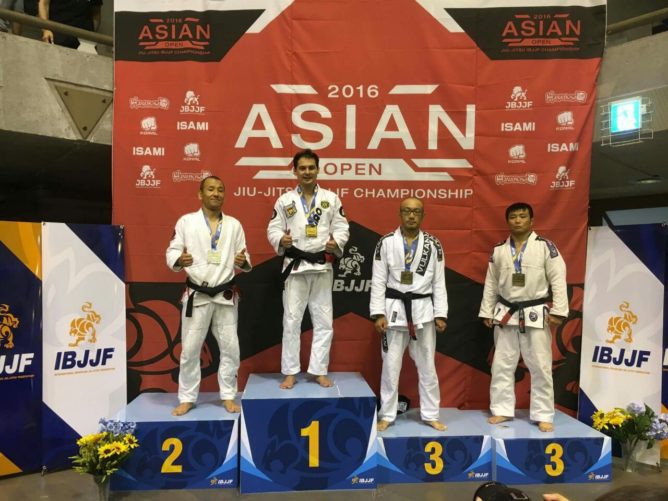 7. Please tell us about your academy(ies)

Our team DEFTAC-RIBEIRO is a real team and family. This isnt a tagline or anything like that. A LOT of us have literally been together thru life and death. We use this bond to always make sure we make everyone around us better. The community we have has produced the most Champions in Southeast Asia for Jiujitsu, MMA and Wrestling combined. We are all very proud of our hard work here. We continue to teach kids, women , adult, senior classes everyday. DEFTAC-RIBEIRO has gyms all over the country.

8. What are BJJ players that you admire, and why?

Saulo, Xande, Roger, Rickson, Rafael, Royler and Damian. Because of Their technique and mentality. Ive rolled with all of them except Rickson and Roger so ive also felt their technique.

9. How would describe your style of Jiu-Jitsu? How about your teaching style?

My style of jiujitsu is also the way i fight. I dont want to see what my opponent can do so i shut it down right away. If i cant shut it down i take a step back and keep going until i can. My teaching style is predicated on teaching the best class i ever have every single time.

I am forever a student so i am always learning new things so i can be the best teacher in the world. Youll see bro once it has happened this year its a surprise. Thanks so much i love your site keep up the good work.

11. Thanks Alvin and all the best