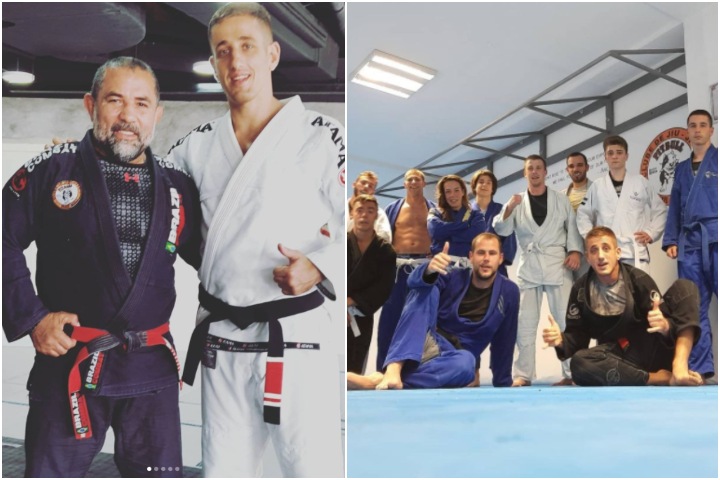 BJJ black belt Davor Markovic of Montenegro has an interesting BJJ journey. Back in in 2015, already a brown belt, he packed his bags to go train and teach BJJ in one of the best places in the world for BJJ, Abu Dhabi. There, he met and trained with with some of the best BJJ instructors and competitors in the world. He took the knowledge he acquired there and moved back home to Montenegro to open his own academy. We talked to Davor to find out more about his journey.

Hi Davor, can you introduce yourself to the worldwide BJJ community

Tell us about your bjj journey

My BJJ journey was quite exciting with many academies changed. First I was introduced with BJJ way back in 2008 with first black belt in Montenegro, Edson Ricardo Rodriguez ( Fabricio International team). At that time I was member of National ju jitsu team of Montenegro, but I decided to move on with BJJ. Then i stayed under FIT Jiu jitsu until purple belt, and in 2013 I moved to live and work in Serbia, Belgrade. There I joined Gracie Humaita. But when my coach Alesandro Nascimento from Gracie Humaita, went back to Brasil, I was forced to find another academy. I think it was the end of 2013 when for the 3rd time I joined new team and it was BJJ & MMA Academy SECUTOR, Belgrade. In April 2015 I was promoted to brown belt, but again I needed to pack my stuff and head to Abu Dhabi, to start all over again. Because of my military background first I started to work as P.E instructor at Police college in Abu Dhabi. There I met local police officer, and in that time rising star Obaid Alkaabi, who was 3 times world champion in blue and purple belts. He introduced me with BJJ community in UAE and show me where to train. So I started at Al Jazira club with their BJJ team. The head coach there was Adilson Jorge de Lima – BITTA, my current coach . I knew that I will stay in Abu Dhabi for a while, so I joined Clube de Pit Bull jiu jitsu ( now when I think of this I hope its the last time I changed academy ☺ ) . Two years later in the mid of 2017. during regular BJJ class Bitta Promoted me to black belt. It was a big surprise, unforgettable.

At the my early days there I was surprised on enormous cultural difference, and variety of nations. First contact with local people was on Abu Dhabi police college, where I was one among 20 Serbian, Montenegro, Slovakian and Arabic Physical education intructors. After a while my Serbian friend Milos Simimc introduce me to a local officer Obaid Alkaabi, and he offered me to help him with Police Jiu Jitsu team, which I accepted with joy. I was strength and second jiu jitsu coach in that team, main coach was Marcos Rathino. I spent nice 2 years with them. After that destiny have another plan for me, so I quit my job on Police job an move on to biggest Jiu JItsu company Palms Sports LLC00. And again big role in that transfer I owe to master and big man Adilson Jorge de Lima Bitta, who recommend me. There in Palms sports company that hires more than 600 BJJ coaches approximately, I met my big brother JIDDU BASTOS LEMOS. He introduce me with work in school, and playful method of teaching in Jiu JItsu.

What was the best part of that experience?

Best part of Abu Dhabi experience I spent in Palms sports, with my brother Jiddu Bastos Lemos. He help me a lot to understand better philosophy of jiu jitsu. Also I learned from him how to give classes generally. And we stayed in touch until these days. He was my big mentor and friend. He is one the people who will be my true friend, I hope will visit him soon ☺. I must mention trainings with many black belts from different BJJ schools. In regular open mat there were more than 30 black belts, which is very rare.
Also I train with many famous names from BJJ, like Master BITTA, Jiddu Bastos, Roberto Cyborg Abreu Andre Campos, Renato Cardoso, Marcos Rathino, Felipe Sagat, Gabriel Sousa, Diego Ramalho, Sergio Rios, Rodrigo Ximbica, Igor Silva, Ricardo Evangelista, Paulinho Barauna ect. And in this way I give my thanks to these great BJJ warriors.

What was the hardest part?

Hm, interesting, the hardest part was arrival, and waking up at 3:40 then run 8 km with student on Police college with cadets, and do 4 km more at 17h afternoon, for 5 times per week in first 6 months.
It really drains you out physically and mentally as well, was pretty stressful, and beside that it was hard, to train jiu jitsu afternoon. But anyway I enjoyed experience, and I am grateful to Abu Dhabi gave me.

Tell us about the history of BJJ in Montenegro

History of jiu jitsu in Montenegro, started in the year of 2007, when Edson Ricardo Rodrigues came. We were one of his first students. Montenegro is famous for great warriors and heroes through history, so those genetics you need to deal on trainings also. Many people just came to classes to check up your skills. So we needed to handle them all, and for me it was interesting how you bond with people more after you fight them ☺. There I met Igor Popovic and Emir Delijic my godfathers. Me and Igor decided to leave Montenegro. Igor was the best student in Edsons academy, he went to NY and became instructor (black belt) under Renzo Gracie Bronx Academy. We are still in touch, beside the fact that we didn’t see each other for 8 years. Emir stayed here in Montenegro and he is helping me a lot with my Pitt Bull Academy here in Montenegro.

Why did you decide to move back to Montenegro?

Life in Abu Dhabi was good but it wasn’t like it used to be. Montenegro has healthy environment, beautiful nature, very nice lifestyle and off course vibes of motherland. I believe that everyone sooner or later feels the need to go back to his roots. One of the biggest reasons I went back is that I realized that my kids will not have a better place to grow up than here.☺

Tell us about your BJJ academy and your team

So I am here, 100% focused on my Academy, trainings, growth, competitions. I want to settle down here, organize my life, create better citizens of Montenegro, by influencing kids and youth of Montenegro. One of my goals is also connecting more with Academies from Serbia, because I would like to bring Jiu Jitsu on higher level. I believe that here on Balkans we are warriors, and we can be better in Jiu Jitsu. The only way to do that is by mixing different styles, and sharing knowledge, organizing seminars and camps. So I am open for cooperation of any kind. By this way I am calling all Gyms to contact me. ☺

What does the future hold for you?

We are very young Academy, established in September 2021. From position of owner and head professor I can say that I am more than satisfied. I have mostly white belts, and there are some guys who trained before and they had colored belts already. We have some brown and black belts who trained before and now they decided to join our team. There are some names that you gonna hear about in the future, I will keep them as a surprise. In two previous competitions we manage to win 16 medals, which is great success but not the end. I Think that we are gonna shine more in next few years, and became brand in Montenegro ☺. Plan is to participate more in competitions locally and internationally and in for next two years we plan to have 10 National competitors who will compete at highest level and proudly represent Montenegro.

Any last words, sponsors to thank?

Big thanks I owe to Emir Delijic black belt and professor in Academy, also big thanks to my brother Igor Popovic, on business advices. I must not forget to thanks Ugljesa Vujovic, Jiddu Bastos, Adilson Jorge de Lima – BITTA, Secutor BJJ and MMA academy Belgrade, all my students, and everyone who was part of my journey, because without you I would not be who I am today.
Last quote : 1% per day. Persistence is the key. We are all white belts that didn’t quit.