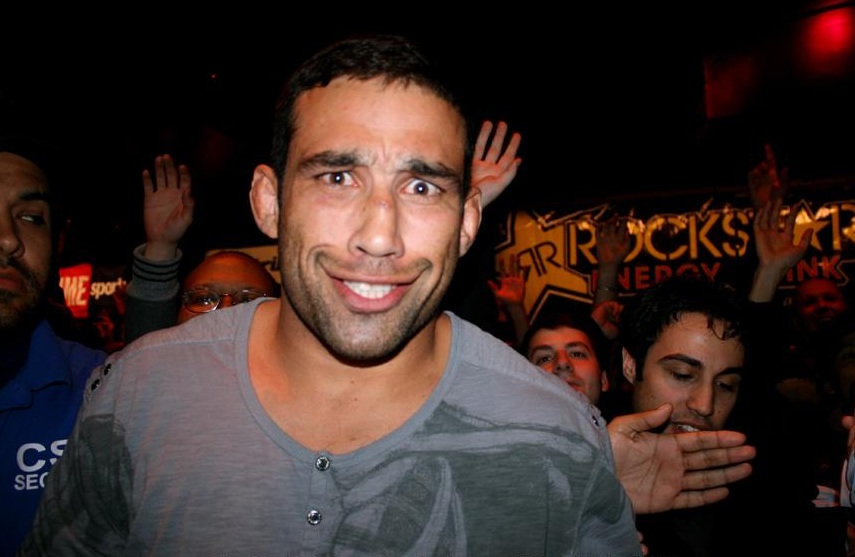 The use of first names and nicknames is a Brazilian tradition that dates back to the country’s days as a colony of Portugal. In Brazilian culture, using just a first name or a nickname is much easier for children since most are named using the Portuguese tradition of using four names. The practice continues into adulthood to reflect the more personalized and informal culture of Brazil that embraces individuality.

Even former president Luiz Inácio Lula da Silva was widely known by his nickname, “Lula,” which was legally added to his name.

The tradition has also been embraced by Brazilian Jiu-Jitsu. Many famous BJJ players are more know by their nickname (which is usually funny) than by their real name.

Here are a few Information collected from Sherdog forums, BJJ Heroes and an article in http://thefightworkspodcast.com/

Here’s a list of nicknames you may have heard, their owners, and translations or anecdotes associa

Alemao (Edson Ricardo Alemao): German or can also be from the favela of Rio de Janeiro Alemao.

Babalu (Renato Sobral): The name of a brand of gum in Brazil

Buchecha (Marcus Buchecha Alameida): Cheeks (of the face)
Cacareco (Alexandre Ferreira): Junk, or garbage or scrap
Cachorrao (Ricardo Almeida): Big dog
Cachorrinho (Flavio Almeida): Little dog
Cachorro Locou (Renato Matos): Crazy dog
Cara de Sapato:  Shoe face as in ugly. Even though “cara” means “guy” colloquially, it also means “face”, which would make more sense in this nickname, since if it was supposed to be “guy”, it should be “cara ‘do’ sapato”
Carcara (Braulio Estima): Type of Brazilian bird with long legs
Charuto (Renato Verissimo): Cigar
Cigano (Junior Dos Santos): Gypsy
Cobrinha (Rubens Charles): Little Cobra
Comprido (Rodrigo Medeiros): Tall or long
Demente (Ricardo Abreu): Demented or crazy
Durinho (Gilbert Burns ): Little tough guy
Draculino (Vinicius Magalhaes): Draculino has discussed his nickname in many interviews. He says a schoolteacher who didn’t like him gave it to him.
Franjinha (Ricardo Miller): Bangs, as in forehead hair cut horizontally
Gigante (Victor Toledo): The giant
Gordo (Roberto Correa):  Fat one/fatty
Gordinho (Rafael Correa); Little Gordo
Jacare (Ronaldo Souza and Romero Cavalcanti): It actually means “caiman”, the species native to the brazilian fauna, as they don’t have alligators there;
Jucao (Roan Carneiro and others): “Juca” means “dude”, so a “Jucao” is a big juca
Lagarto (Lucio Rodrigues): Lizard
Limao (Luis Heredia): Lime. Luis ‘Limao’ Heredia got his nickname when he was a teenager and had a girlfriend. There were apparently too many public displays of affection. A friend remarked that when they were making out, it looked like the girl was sucking on a lime. This is according to an old fightworks podcast interview.
Louro (Marcos Galvao):  Blonde
Macaco (Jorge Patino): Macaque, a type of monkey
Magrinho (Cole Miller): A good way to say skinny like “little skinny”, or “very skinny”
Margarida (Fernando Pontes): Daisy. A Portuguese girl’s name derived from the name of the flower. Pontes is called Margarida because when he first went to Alliance, he had braces with multicolored rubberbands and Gurgel thought it was so funny and fancy-boy that he called him Daisy, and it stuck.
Megaton (Wellington Dias): Because of the power of his judo throws
Morango (Fabricio Camoes): Strawberry
Napao (Gabriel Gonzaga): Big nose
Negao (Fabio Negao): Big black guy
Pé de Chumbo (Delson Heleno): “Lead foot”, i.e., clumsy
Pé de Pano (Marcio Cruz): is the name of the Woody Woodpecker’s horse Sugarfoot in Brazil
Pezao (Vinicius Magalhaes): Bigfoot
Rattinho: (Jonatas Eliaquim): Little rat
Risada (Roberto Atalla) used to always be smiling even when in bad positions.
Roleta (Roberto Magalhaes): Roulette
Sapao (Carlos Alejandro Bán): Big frog
Shaolin (Vitor Ribeiro): because he used to meditate
Soneca (Helio): Soneca” means “Sleepy” in Portuguese. As a youngster Helio Moreira played Roller Hoquei (Quad) as a keeper at the “Casa de Portugal“ club in Teresópolis, Brazil. He played alongside another BJJ legend, Jean Jacques Machado. One day while defending a ball, he was hit in the head, the impact of the ball made a dent in the helmet and knocked Helio Moreira out. Because Helio passed out his team mates started calling him “Soneca” (Sleepy).
Sururu (Edson Jorge): The name of a seafood dish made with a bunch of mixed left overs, mixed. In slang, it also refers to a commotion, as when a bunch of people arguing for something, they are “making sururu”
Terere (Fernando terere): Terere is the name of a Brazilian herb used on a certain type of tea. It is dark and highly energetic, just like the Fernando Augusto who was always hyperactive when fighting, thus the name Tererê.
According to Fernando Araujo: “As far as I know, it was because of that song “Whoomp! (There It Is)”, by Tag Team. The thing is, this song was still very popular there, and the Brazilians would sing “Uh, tererê!”. I’m not sure the precise reason (either because he was “crazy”, or because he was from the slums), but I’m pretty sure his nickname is linked to that brazilian version of this song. I even remember Muzio de Angelis claiming he was the one who gave him that nickname”
Toquinho (Rousimar Palhares): Treestump
Tussa (Roberto Camargo Alencar): short for “dentussa”, meaning Big Teeth
Urso (Mauricio Motta Gomes): Bear
Zé: An abbreviation for the name Jose
Ze Beleza : Jose Leao Teixeira (Beleza means cool, which he used to say a lot)