7 Key concepts to have a dangerous guard 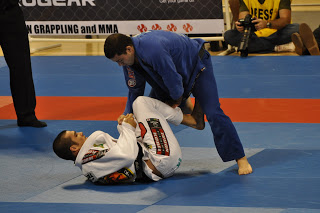 As Carlos Gracie Jr. puts it, “The guard is a Jiu-Jitsu fighter’s fortress.” And that’s the straight truth. Starting from the position, gentle-art practitioners have millions of options for keeping an aggressor at bay, not to mention the myriad attacks that can prove decisive in a match, in or out of the gi.

GRACIEMAG.com hunted down seven gi-wearing beasts who were ready and willing to share some moves for efficiently attacking from guard position. Heed their words, and when you’re done fathoming what they have to say, share with us: What is it that you do to make your guard more efficient and become a well-rounded fighter?

1-COMBINE DEFENSE AND ATTACK FROM GUARD
For Isaque Paiva of Saikoo team, the secret is in upholding the defense position while, at the same time and ever more efficiently, launching attacks like, for instance, chokes from there.

2-ATTACK TO NOT NEED TO DEFEND
To 2012 Pan champion Lucas Leite it’s all about making your guard offensive, never static. “From guard the hint is to attack—the more you attack, the less you’ll need to defend,” is the teacher from CheckMat’s advice.

3-BREAK THE ENEMY’S POSTURE
According to Marcel Fortuna of Ralph Gracie academy, “One of the main tricks to closed guard is undermining your opponent’s posture. Train to break his grips and pull him to you, cracking his posture. That’s a key detail. After that you can start going for sweeps and finishes.”

4-CLIMB THE OPPONENT USING THE LAPEL
The next lesson comes direct from Pennsylvania, USA. Black belt Daniel Beleza of SAS team has a lesson exclusively for GRACIEMAG.com readers, a choke from guard using the adversary’s lapel.

5-COLLAR AND SLEEVE GRIPS
To André Galvão the key is in control. “Control your opponent’s collar and sleeve and you’ll have plenty of options for attack from guard,” says the teacher from team Atos. “By sinking those grips you can snag an arm, triangle or omoplata. It’s a basic grip but it offers lots of finishing options, control and attacks.”

6-PRACTICE PLENTY OF OMOPLATAS AND TURN ON AUTOMATIC PILOT
To Lucas Lepri of Alliance, doing lots of omoplata repetitions makes guard playing smooth sailing. “I really like the omoplata lock; I feel it works really well from any guard, and it always catches the opponent by surprise,” preaches Lepri. “You just need to practice it plenty so it’ll be on automatic, and after that you iron it out in training.”

7-HAVE A STRONG STARTING POSITION IN JIU-JITSU
Controlling the opponent’s posture is crucial when you attack from guard,” says Gracie Humaitá’s Zak Maxwell. “With a firm grip on the lapel and another on the sleeve I feel more comfortable to start going for most of my attacks. Have a strong initial position that you trust, and go for it.”