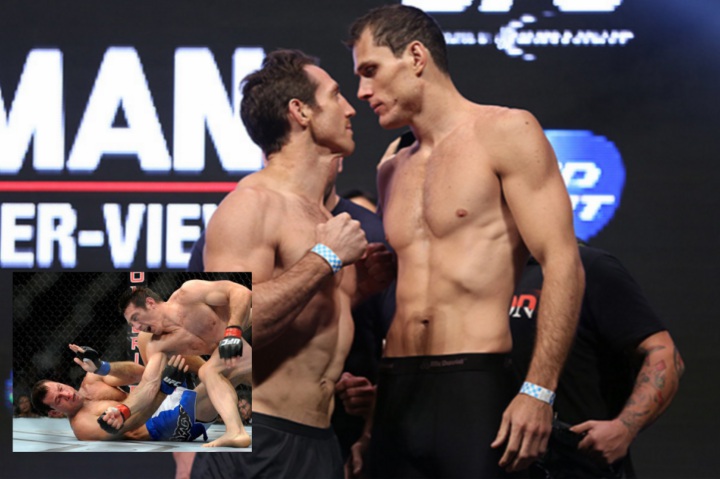 As we all know pure BJJ fighters have lost their dominance in MMA and with that, the practice of BJJ veered so far away from its fighting roots that most BJJ gyms no longer train it within a MMA environment.
This first fight exposed the weakness of a BJJ killer’s inability to bring the fight to the mat. Demian Maia’s lack of rudimentary striking and horrible take down skills gave Anderson Silva the arrogance to dictate where the fight went. It also changed Maia to work on his Wrestling, where today he credits Wrestling to rejuvenating his BJJ prowess.

This is the second of the 3 fights that changed the direction of BJJ further away from MMA and into the safe womb of sport BJJ.
Jacare Souza was a sport BJJ superstar with a well rounded game of standup grappling, ground grappling and incredible athleticism. He was the perfect pure BJJ guy to make it big in MMA. In fact, he became a champion in Strikeforce. However, he lost his title to an upstart Luke Rockhold.
The telling thing about this fight was, while Souza was brilliant, it wasn’t good enough against someone who lacked the pedigreed background Jacare possessed. Rockhold was this surfer dude with a nondescript background in traditional martial arts – the type that many BJJ guys make fun of. Rockhold ended up outhustling Jacare, scoring points with the traditional martial arts moves.
It was frustrating for many BJJ practitioners to see this happen.

This is it. The big enchilada. The 3rd and biggest fight that changed the direction of BJJ within the MMA context. Roger Gracie was the top of the food chain sport BJJ God. He was the most dominant sports BJJ player of his era. He was also an ADCC Grand Champion. He was looked to as THE sports BJJ guy that was going to bring BJJ back to dominance in MMA. Unfortunately it didn’t work out that way.
Roger Gracie fought a journeyman, in Tim Kennedy. Kennedy did not possess any superior skills for MMA other than the fact he was a soldier that faced real life and death scenarios. His actual fighting skills were average, at best, but his fighting skill to survive was second to none. In this fight, Gracie was able to take Kennedy’s back, but could do nothing to finish him. Gracie could not translate his superior sport grappling skills into a MMA fight. This is where Kennedy found equal footing with Gracie and ended up outworking him and exposed Gracie’s poor MMA grappling skills. This is THE situation where sports BJJ did not work in a MMA fight. Kennedy went on to beat Gracie, and sports BJJ went on to embrace the berimbolo, worm guard, donkey guard and other fun moves that have almost no connection to a MMA fight. It became more important for BJJ guys to have a fancy gi versus working on using BJJ to survive in a fight.