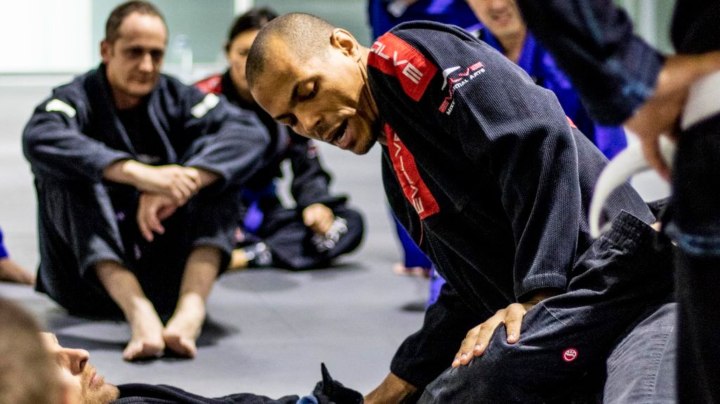 One of the most heated debates in all of the martial arts is the classic argument Brazilian Jiu-Jitsu (BJJ) practitioners have over whether it is better to train with the gi or without out. As both styles of BJJ are highly effective and fun, there isn’t a reason why you shouldn’t train both! As there are differences between grappling no-gi and with the gi, it would be wise to develop a game that worked well in both. Take a look at our list of techniques that work in both gi and no-gi grappling, and make sure you practice them regularly!

What makes a Brazilian Jiu-Jitsu technique work in both gi and no-gi grappling is if it is structurally the same whether or not the opponent is wearing a jacket. Perhaps the reason the triangle choke is one of BJJ’s most iconic and popular submissions is due to the fact that it is executed in the same way whether or not the opponent is in a full kimono or only wearing vale tudo shorts.

The triangle choke is not only one of the most popular submissions in gi Brazilian Jiu-Jitsu, but in no-gi grappling and MMA as well. If you were to spend the day watching the Mundials, and then a ONE Championship event at night, there is a good chance that the triangle choke would be used frequently in both settings. This is due to a few different reasons. Triangles work extremely well in gi grappling due to the ability to “pull” the opponent into it using a wide assortment of gi grips, from the De La Riva guard, spider guard, or any other modern BJJ guard system.

While the setups used in no-gi grappling and MMA are incredibly different from those in the gi, they are still very effective. In no-gi grappling the triangle is utilized most often from “trapping” guard systems, such as rubber guard, Williams guard, or just a classic overhook. These systems trap the opponent’s arm to the mat, allowing the guard player to work on clearing the free arm, creating the “one in, one out” scenario that leads to triangles. In MMA, fighters on top of their opponent are frequently looking to strike with punishing ground and pound, which opens up their arms and gives the guard player the chance to catch them in the triangle.

Even though each ruleset causes different setups for the triangle, once the triangle has been achieved the finish is identical. From the “one arm in, one arm out” position, the attacker grabs his own shin (the one that is across the opponent’s shoulders), places his foot on the opponent’s hip to create the angle, and synchs on the choke. As the finish doesn’t require the assistance of a gi, the Triangle Choke is perfect for grapplers who like to test themselves in varying rulesets of grappling.

Perhaps one of the most difficult aspects for Brazilian Jiu-Jitsu practitioners who only train in the gi to grasp in no-gi is passing the guard. They quickly find that the guard player still has all the strength and flexibility that helps him prevent the pass, yet the passer has none of the pant grips that would allow him to counter this by stuffing the legs. While it is possible to still implement an agility based passing game without the gi on, many practitioners prefer to lean towards a pressure passing style in no-gi, using the weight of their body to control their opponent’s hips and take away their flexibility. A perfect option to do so is to utilize the over-under pass, which does a phenomenal job of caging your opponent’s hips, allowing you to gradually walk up his body, eventually getting passed his legs and passing his guard. As with the rest of the techniques on our list, the over-under guard pass works just as well in gi competition as it does in no-gi.

What makes pressure passing, and more specifically the over-under guard pass, work so well in all forms of grappling is that it uses your opponent’s limbs to control his hips, not the garment he is wearing. While the grips necessary for a gi based pass like a Torreando are non-existent if the opponent is not wearing the gi, this is not the case with the over-under. The over-under is executed by placing one of your opponent’s legs between your own, then driving your head into the middle of his sternum, flattening him out and keeping him on his back. From here, one of your arms goes under the opponent’s free leg and hugs the thigh, while your other arm goes over the trapped leg, making sure it stays trapped. As grabbing onto the opponent’s limbs in this manner provides an unprecedented level of control, you now have the capability to slowly walk around the trapped leg, placing you in side control. As the mechanics of this position depend on grabbing your opponent’s legs and not his pants, you will have no trouble converting this pass between gi and no-gi grappling.

As the double leg takedown has been made most effective by traditional wrestling, it is no surprise that it works well in a no-gi context, but it may come as a surprise that it works just as well with the gi on. While BJJ practitioners understand that the double leg could work in the gi, the addition of stifling gi grips makes many feel as if they can never shoot on their opponent, leading them to write the takedown off as ineffective for BJJ.

This is a big mistake as with the proper gripping sequence and strategy the double leg takedown can become a very effective tool in gi grappling. If one requires competition proof, then look no further than the legendary Marcelo Garcia who is famously known for utilizing double and single leg takedowns almost exclusively in the gi.

While these are our top choices for techniques that work in both gi and no-gi grappling, there are many more that will work just as well. Make sure you train these regularly while keeping an eye out for any techniques that you think you can utilize whether or not your opponent is wearing the gi.