3 Back Mount Escapes You Need To Know In BJJ 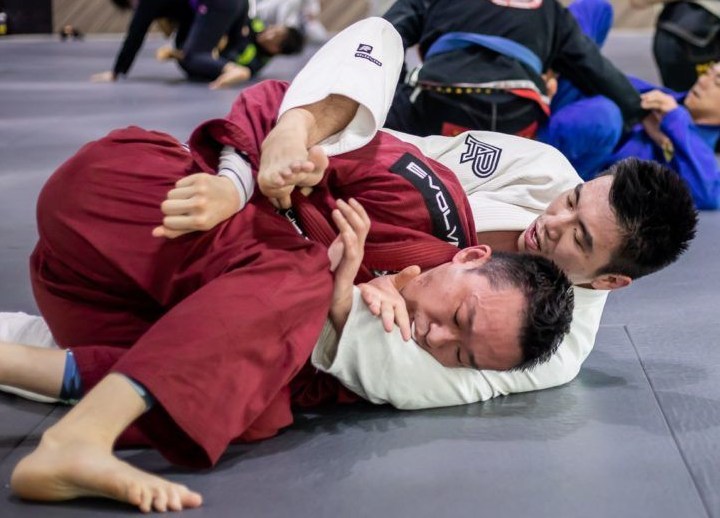 While practicing escaping dominant positions is never as fun as practicing the dominant positions themselves, it is equally as important. Especially at the beginning of your Brazilian Jiu-Jitsu (BJJ) journey, you are going to find yourself in bad positions, such as having your back taken. While it may feel like there is nothing that you can do, there are many ways to escape back control and put your opponent on the defensive! Take a look at some of our favorite ways to escape from back control below, and remember that you are never out of the fight!

As with every other back escape, the Shrimp Escape will only work if you are defending your neck from strangles by keeping your hands up high and your chin tucked. Once you have protected yourself by getting your hands in a “prayer” position inside your opponent’s seatbelt grip, you can start your escape. Begin by wiggling your shoulders off to either side of your opponent in an attempt to get your back flat to the floor. It may seem obvious when stated, but if your back is touching the mat, then your opponent is no longer on your back!

Once you have successfully created a misalignment between you and your opponent by getting your shoulders on the mat, you can begin to shrimp. Just as with every other time you shrimp, attempt to scoot your butt away from your opponent as you push him off with your hands. One of two things will happen. Either he will recognize that you have escaped and come up to a top position, or he will fail to recognize you have escaped. If he doesn’t come up on top, grab their far side pant leg and use it to pull yourself up, taking the top position for yourself. Regardless of whether you end up on top or bottom guard, you are in a much better position having escaped back control!

When your opponent has you trapped in a tight back mount, the majority of his control over your body comes from his hands, not his legs. Because of this mechanic, a great way to escape the back is to break his seatbelt grip and control his hands, then focus on beating his leg hooks. Perhaps the best way to control your opponent’s hands and escape is with the Baseball Bat escape.

As the name suggests, for this escape we are going to control our opponent’s arm as if it were a baseball bat, with two of our hands grabbing one of his. The first step is to grab the wrist of your opponent’s “over” hand with a baseball bat grip. Immediately begin to push his arm away, breaking his grip. Because you grabbed his “over” arm, he won’t be able to move to the Rear Naked Choke until he breaks your grip. Once you have broken his seatbelt grip, immediately move his “over” arm to the other side of your body, so that both of his arms are on one side of your body. This will significantly hamper the control he has over you. Begin to spin into him, turning to the side that both of his arms are on. It is possible that your opponent will be able to stop you from spinning with his legs. If he does, and you feel that you can momentarily control his arm with one hand, quickly reach down and pull his far-side hook out from between your legs. You will now be free to continue to spin into him and come up on top. If you’d like, you can even enter straight into a D’arce Choke by shooting your arm underneath the arm you controlled with your baseball bat grip. Lock up the choke and squeeze slowly, forcing your partner to tap!

Often when you are working to escape the back, you will have the opportunity to enter right into a Leg Lock submission. This is due to the fact that while your opponent is in a much more dominant position than you once he takes your back, your legs are still inside of his, a prerequisite for attacking with a Leg Lock. Once you have begun to escape his powerful seatbelt grip and cleared their legs from inside yours, his control is gone but your inside leg positioning remains, which allows you to go on the offensive.

The Leg Lock Escape works well when you have begun to use the Shrimp Escape, but are unable to get your legs free. Say you have gotten your shoulders to the mat, but your opponent’s hooks are too strong to clear. Instead of attempting to free your legs, spin to face your opponent as much as possible, shooting one leg through as the other contracts into a butterfly hook. Use your butterfly hook to create space between you and your opponent, as the leg you shot through goes to their hip, ensnaring him in a tight Ash-Garami leg entanglement. Now you can begin to attack with all sorts of Leg Locks, including the powerful heel hook!

Just because back control is often touted as the most dominant position in BJJ, that doesn’t mean it is impossible to escape. While it can often feel as if you are helpless against a better opponent once he has taken your back, this is not true. Not only can you escape your opponent’s back, but you can attack with submissions in the process!