3 Attacks From Single Leg X-Guard You Need To Know 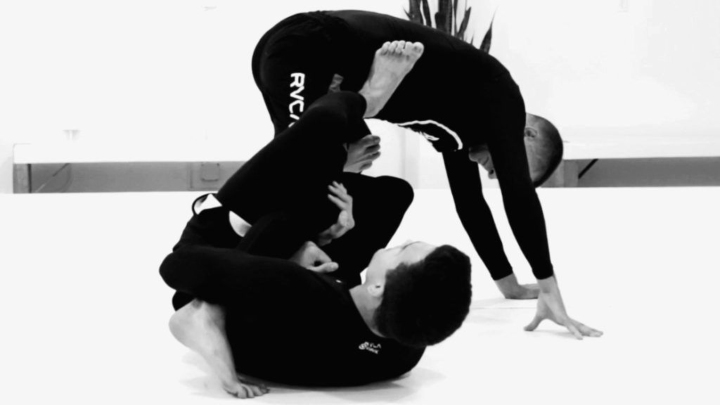 The Sit Up Sweep

Immediately after you have established your Single Leg X-Guard you should be looking to attack your opponent’s base with the Sit Up Sweep. While the Sit Up Sweep is an incredibly effective sweep that can be used to obtain the top position, it is also a good way to “jab” your opponent so that you can launch into a follow-up attack based off of his reaction.

The first step to executing the Sit Up Sweep is to lock your opponent’s foot (the one you have trapped in your guard) in place to prevent him from using it to base out. You can do this by squeezing your overhook tightly across your body, or just pinching your elbow down so that his foot is trapped against your ribcage if you don’t have an overhook established. Next, squeeze your legs together so that you can use your opponent as a base to pull your hips as high into the air as possible, ideally getting your hips above his trapped knee. Once your hips have gotten as high as possible, turn them towards your opponent’s trapped leg and hip in, forcing his knee outwards. This should cause him to fall over.

If he is able to maintain his balance, you have one more variation of the Sit Up Sweep you can attack with. Switch your hands so that your outside hand is now grabbing ahold of your opponent’s trapped ankle, while your near side hand posts to the floor. Use this posted hand as a base to drive your hips even higher on your next “bump” attempt, generating more force and likely sending your opponent to the mat. Whichever version of the Sit Up Sweep you used, quickly execute a tactical stand-up and claim the top position.

What makes the Single Leg X-Guard such an effective guard is that it offers the guard player the ability to quickly switch between sweeps and submission attacks, specifically leg locks. One of the best leg locks to learn is the Ankle Lock, as it can be used in the majority of rule sets and belt levels. There are two ways you can use the Ankle Lock from the Single Leg X-Guard. Which method you use will depend on whether your Sit Up Sweep attack was successful at knocking over your opponent.

If the Sit Up Sweep was successful and your opponent was knocked to the mat, you will have the opportunity to launch straight into a submission attack. If you didn’t have the overhook when you swept your opponent, quickly establish it and slide it down so that your forearm is across your opponent’s Achilles tendon. Pull up with your grip as you arch your back, extending your opponent’s ankle and forcing him to tap.

If your Sit Up Sweep was not successful and your opponent is still standing, he will likely be driving into you in an attempt to regain his balance. Go with his momentum, turning away from him as the leg you have wrapped around his knee comes in front of his body, bending his knee and exposing his ankle. This is known as a “knee reap” and is illegal under the IBJJF rules, so make sure this variation is permitted by your instructor before employing it. Continue to roll to your stomach, so that you are facing down on the mat and your opponent is facing away. You should be tripoded up on your knees and forehead, not laying flat on your stomach. To finish this belly-down Ankle Lock variation, pull with your grip as you drop your hips, forcing your opponent to tap.

The Tripod Sweep is often one of the first sweeps taught to new Brazilian Jiu-Jitsu practitioners, due to the fact that it can be utilized from numerous guard positions. While it is still a powerful sweep from the Single Leg X-Guard, attacking with it will require you to forego the Single Leg X position, so it is best not to attempt it until after you have tried the previous two attacks.

The first step to attacking with the Tripod Sweep is to grab ahold of your opponent’s trapped ankle with your nearside hand. If you have been using an overhook you will have to unwrap and grab the ankle so that you can create some distance. Next, drop your hips to the floor so that you can create the space to circle your “wrapped” leg out from between your opponent’s legs, placing the foot on his hip. You will likely feel like you are too close to him to achieve this, so feel free to shoulder walk backward to create space if necessary. The last step to attack with the Tripod Sweep is to drop your other foot from your opponent’s far hip to behind his far knee, blocking him from stepping back. Now all you have to do is kick with the foot that is on his hip as you pull with the one behind his knee, knocking him over. Execute a tactical stand up and take top position.

While these three attacks are just a few of the ones that are available from the Single Leg X-Guard, they are arguably the most powerful so they should be the ones you focus on first. Make sure you practice regularly so that you can attack your opponent with both sweeps and submissions, keeping him on the defensive and giving you the advantage!