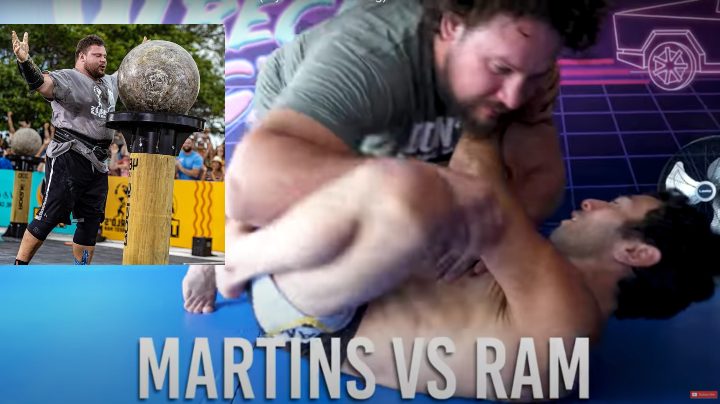 He actually wrestled in high school and also trained BJJ for 6 months under Xande Ribeiro.

In this video, Martins and his friend Juji, who is a big guy but without any bjj experience (but is a black belt in Taekwondo), take a lesson with high level bjj black belt Ram Ananda who is also a 2x BJJ world champion (at brown and blue belt adult). Ram is a black belt under Rubens Charles.

At one point, we see a quick roll between the 331 lb Martins Licis and Ram who is just 145lb. Even though it looks like Ram is being polite and not really trying, it’s fair to say that a world strongest man with 6 months BJJ training is a very scary thing to see. His power is impressive. We can just imagine if he trained for 2 years.

It’s more than likely that a motivated Ram Ananda would quickly submit the Strongman.

Another world strongest man who ventured quite successfully into MMA is Polish Powerhouse Mariusz Pudzanowski.

Check out the roll from 4mins 27sec: