Musumeci: “I’m Very Introverted, It Felt Like I Was Back At The Beginning Of Competing” 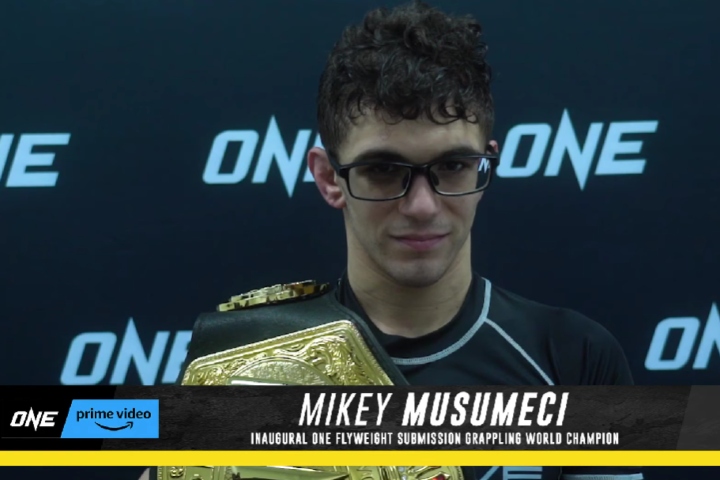 Mikey Musumeci had a phenomenal performance at his inaugural ONE Flyweight Submission Grappling World Championship match against Cleber Sousa.
In 10 minutes of action-packed rolling, Mikey was the one who kept dictating the pace and distance at all times. Ultimately, he won via unanimous decision.

However, in the post-fight interview, Musumeci said that the “bright lights” of performing in front of such a big crowd had an influence on his inability to submit Sousa:

I felt like I had an adrenaline dump being the first time, center stage for a title fight.
I’m very introverted. So it felt like I was back at the beginning of competing, and all the things I used to experience all over again, times a thousand.

It’s all a big learning experience for the beloved “Darth Rigatoni”:

It was just such a crazy experience. I loved it. And I need that experience fighting in this [huge state], you know.
Everything for me is adaptation. So I have to adapt my homeostasis now to fighting in a title fight, in a cage, in front of so many people.

With that said, Mikey still immensely enjoyed the entire experience. And he’s turning into a fan of rolling in a confined space:

Honestly, I like the circle wall because it makes it harder for the person to run away out of like, there’s no out of bounds.

So it keeps us inbounds. I actually prefer the circle wall, but it definitely is a new thing for me.
And I just have to adapt over time. It takes me a while to adapt to things but I’m doing decent.