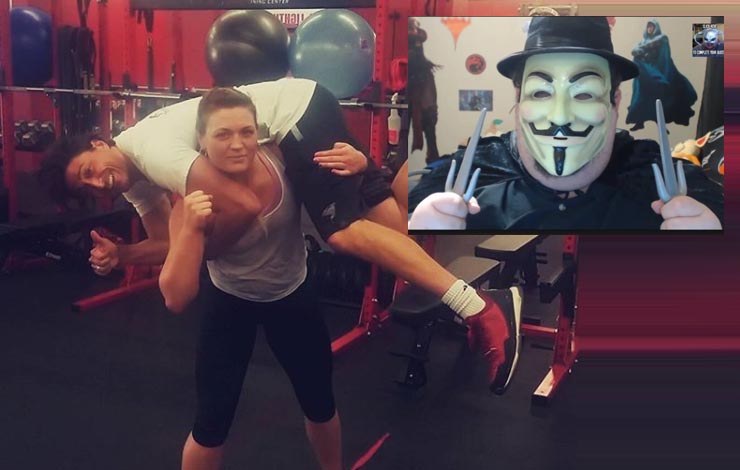 Any time a video of a very technical girl is seen online there’s quickly a troll emerging tearing it down. The internet has spawned many amateurs that are mostly spectators and judge by what they’ve seen as opposed to what they’ve done.

This is how McDojoLife page came to life on facebook.

And with it came the money to back up a good idea:

(We are willing to pay out $1,000 to any pro female 160 pound fighter willing to come and spar with this man. We will also provide plane ticket and hotel)
A member sent this to us and we are to intrigued to not try and set this match up.
Apparently this guy lives in Gainesville, Florida and is willing to spar a pro female fighter in his weight class to prove women cannot beat men in a altercation. Even if the woman is trained and the man is not. To our knowledge he has little to no experience.
Obviously we cannot set up a pro fight for legal reason but we would definitely be willing to set up a sparring match with mma rules.
Any takers or know of any pro female at 160 willing to prove this dude wrong? Send us a DM
What are your thoughts?

There’s the one time we all regret Gabi Garcia couldn’t take the fight!

But alas there was quickly an interest by the WMMA fighter:

Anna McCauley Dempster, an Oregon native with a 7-0 amateur MMA record, to reach out and set the date of the fight for January 6.

So the event became official:

It is official. Anna Dempster has stepped up to face the internet troll that says an untrained man can defeat 99% of women even if they are trained. His comments will be posted in this event page.

A mat fee will be required at the door. We will be streaming the sparring match live for anyone unable to attend. We are asking for donations to help with costs and an extra bonus for her.

Huge shout out to Mitchell Chamale and Charlie Benham for allowing us to use their facility. And for Combat Night for helping us keep everything legal.

And as for Anna she told jiujitsutimes:

“I love everything it stands for, especially women in the sport,” she says. “Something I find particularly significant is that it was wrong for my grandmother to even watch men’s wrestling, god forbid participate, and here we are in a generation where we as females are on the rise and now I able to express myself in the best way I know how: fighting.”

“I took the fight because I am not one to ever back down, but even more than that, the bigotry in that twerp’s statements disgusted me. It is like he time traveled way back in time, relishing in the oppression of women. I firmly believe in empowering women, and anyone that tries to go against that repulses me. I want to not only prove him wrong, but everyone out there with the same opinion.”