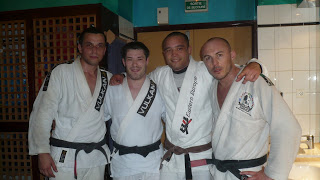 I happen to be back home in Paris for the next 10 days where I’m visiting family and friends.Whilst here, I will be visiting 5 BJJ academies. My BJJ journey started in Paris 11 years ago the now defunct Temple des arts Martiaux where I started training under Orla Junior (Alliance black belt, under Alexandre Paiva). Every year after that, we had new Brazilian instructors. I lived in Paris until 2004 before moving abroad for my work.
The first stop on my BJJ academy tour is Jeremy Idels BJJ which is located at the Kajyn Club near Bastille. My plane from Belgrade landed at 3pm and I was rushing to get to my sister’s apartment in the 7th district of Paris (10 mins walk to the Eiffel Tower) to drop off my bags. I hoped in a taxi at 5:45pm hoping to make it for the 6pm session. After being stuck in Paris traffic for a good hour I finally made it to Bastille, at 6:45pm and minus a 35 euro taxi fare!

The Kajyn club is a a big modern  martial arts complex with multiple rooms, a boxing ring, 2 mated areas, a weight room, a

sports bar. It’s a really nice place to train.
The BJJ academy I was going to is lead by Jeremy Idels, one of the pioneers of BJJ in France. Jeremy started traing back in 1997 and got his black belt from Steve da Silva (Nova Uniao) in 2005. I’ve known him for a very long time and he is really someone with a BJJ brain, in the sense where he analyzes everything and every position. At the moment he is injured recovering from a shoulder operation. He is just rolling with one hand but he’s still kicking my butt.
So I arrived about 50 mins late for class. There were 3 black belts on the mat that day (They have 5 black belts in all at that club) 2 browns, lots of purples and blues, and a few whites. They were doing positional rolling as I arrived. I got into my gi and did the fastest warm up ever, 1 minute! I went to hug all the black belts who are my old training partners and went straight to rolling. The specific exercise consisted of starting in your opponent’s guard and he had to either sweep or submit you. You had to pass or submit him. The winner would stay on the mat and wait for the next challenger. We did that for a good 15 mins then there was a 2 minute water break and I was paired up with Phil, a purple belt. I was surprised to see Phil there as he was the main bartender at “The violon dingue” which was the student bar of my student days where I used to get hammered every weekend! Phil had started training 5 years ago and had become hooked to BJJ and had gotten to purple belt. Great! Happy to see more people sharing our passion.

The rolling went well, Phil had a nice half guard game. I was feeling gassed out as I had been sick for 1 week before this and felt sapped of energy. I was able to sweep and pass his guard just as time was over.
That was the end of class. The atmosphere was very friendly and all the guys were very welcoming. I went for a after training cofee with Jeremy and Goran (a fellow Serb and BJJ black belt) It was 8:30 pm and I had to rush to my next training at 9pm and just down the road: PS Phenix BJJ, with 4th degree black Belt Paulo Sergio. Till the next training report…