Ryan Hall On Self Defense Only Schools, Specializing In 1 Technique & Sport BJJ As A Valid Form Of Combat 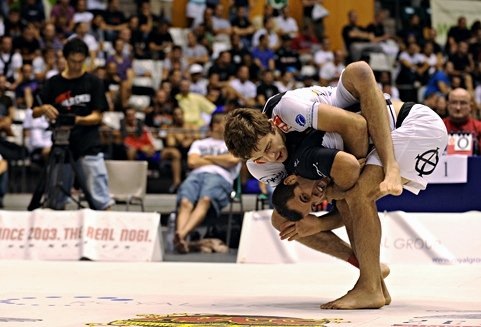 BJJ champion Ryan Hall spoke to the Fightworks Podcast about his experience of using Jiu-Jitsu in a restaurant altercation.

In the interview, Hall spoke about Martial arts schools that are self-defense only and don’t have a competitive aspect:

I think you see a lot of martial arts instructors tying to pass themselves off as self-defense experts, which I am certainly not. I’m a Brazilian Jiu Jitsu competitor, practicer, call it whatever you want. And I know a good deal about self-defense because I’m interested in it… but I’m certainly not an expert. But the idea that John Smith is known for his low single, he better watch out for some angry guy on the Jersey Shore because he wouldn’t be able to double leg that guy. Get the f*** out of here…

So I would completely disagree. I’d say most of the people that say that practice for self-defense and don’t train with tough athletes are really doing themselves a disservice. If I can wrestle with, say, Division I collegiate All-Americans and do fine. If I can wrestle with Marcelo Garcia and do ok, what the hell is some regular guy going to do? The only chance they have is to sucker punch me because anything that engages in an actual engagement of physical combat, I would absolutely hammer this person.

That is like saying “Oh yeah, I’m going to go strike out some guys in the Major Leagues because I’m gonna spit on the ball” Get out of here, it is ridiculous! If you take that though process and apply to any other area of life people would laugh at you.

Hall talks about how athletes should specialize in a technique in competition that they would become masters in, for ex: Roger Gracie’s cross choke from mount, Minotauro’s triangle etc…

He also talks about the 50/50 guard and how he thinks it’s a valuable postion in Jiu-Jitsu:

You’ll see people expressing jiu jitsu or wrestling or boxing in kinda a little bit of an esoteric way every now and then because competition incentives that because they are competing against other elite level athletes and that is where they find their edge. But when you take someone out of an elite level situation, and have them go against some regular guy… the idea that there is some super sweet badass dude walking around, everyone knows how easy it is to beat up all the white belts when they come in on the first day of jiu jitsu or how easy it to just beast a guy up who just comes into a boxing gym the first day. Those are the guys walking around in real life.

Because you compete and because you train athletically against resisting opponents, who are not only strong and fast, but they know exactly what you’re going to do and they know how to stop you and how to get you themselves, it prepares you to deal with something like this very easily. So basically I feel the whole sport vs street argument is retarded unless you want to start talking about awareness and avoidance and things like that.

Hall on claims that sport BJJ doesn’t prepare you for a real self defense situation :

Those people are wrong, to be frank. Anyone who doesn’t realize that situation dictates tactics really can’t be helped.

Although I can see a certain level of a point. The angle that makes sense to me is that combative martial arts which creates excellent combative athletes and fighters, like jiu jitsu, wrestling and boxing, while they don’t train you for is self-defense, they train you for single combat. I don’t care if this person tried to eye gouge me or if they bite me, it is irrelevant. If I want to hurt this person, they don’t have a prayer in the world.

The physical tactics don’t change. It is really the mental and the understanding of things. Its like – letting this person get too close because if they have a blade, they can cut you well before you’d be able to see it if they are really, really quick.