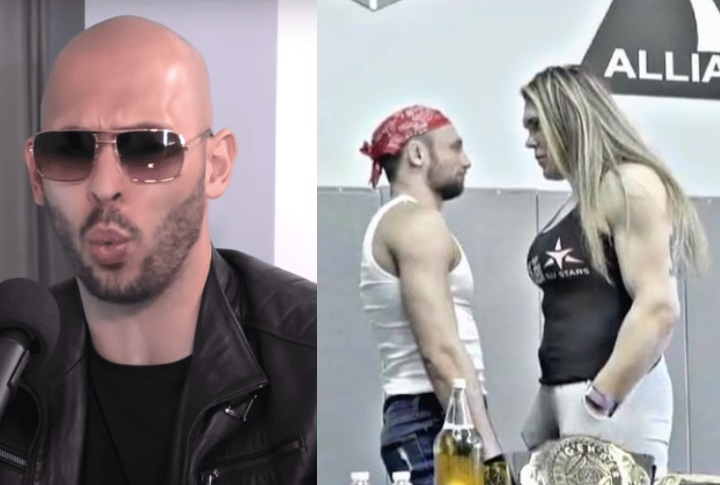 Controversial former kickboxer Andrew Tate is known for his brutal honesty which may offend many people nowadays. He recently gave his two cents on capabilities of pro female fighters and said that any average man can beat them.

But who is Andrew Tate, and what does he know about fighting?

Andrew Tate is a retired American-British kickboxer and now social media influencer. Following his storied kickboxing career, Tate made a move to influencer marketing–but his online presence has been controversial.

He has made very borderline statements on topics such as sexual assault has been seen by critics as misogynistic.

He has fought at a high level in kickboxing winning the ISKA world title. It was Tate’s second world title in two different weight divisions.

He has one amateur MMA win over UFC vet Luke Barnatt and one pro MMA win by KO.

On his podcast, he said about female MMA fighters:

“You took a girl, who is one of the best fighters in the world. If she met a man who is smaller than her and he didn’t expect her to have some hands, maybe she could catch him once or twice. But, most females are physically smaller than men. If a 250 pound or 300 pound man even against the best female fighters in the world who is around 130 or 140 pounds.” Tate said.

In a street fight scenario:

“There are weight classes for a reason. You think this is going to be a fair fight like in the UFC? You think he is not going to grip her up, grab her by her f*cking jacket, lift her up and slam her on the concrete? It’s different. Violence is different than fighting, and the idea that you are going to be able to do this, do that, or just kick him in the b*lls… none of that is real. None of that is real on any level.”
“Now you are talking about a UFC fighting girl. Maybe if you’re one of the most highly trained UFC fighting females… Maybe four names you can name on the planet, maybe there are some men your own size you might be able to hit.”