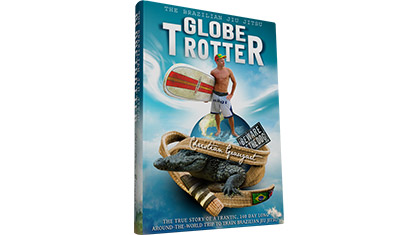 You have probably heard about Christian Graugart the Danish BJJ black Belt who travelled around the world training in all these different bjj gyms. Well Christian wrote a book about his whole experience. After having lost one of his team mate who had commited suicide, Christian Graugart, who was then a brown belt BJJ teacher near Copenhagen, Denmark, questioned his life. Was he enjoying his life? What if death were to take him also too soon? He decided to do something about it and chose to do an around the world jiu jitsu trip. Christian travelled to 29 countries, including France, Romania, India, Japan, the US, even the Gualapagos Islands and of course, Brazil where he trained in the favelas of Rio. Christian met hundreds of people and talks about how his game improved after having trained with so many different people.

Me, Christian, and my training partner Uros Culic at the 2012 Europeans

I’m half way through reading the book. and I can tell you that it’s a real page turner. If you love BJJ (you for sure do if you’re already reading the website) then for sure you will enjoy reading about Christian’s adventures rolling in all these countries. Personally I really felt a connection to a lot of the places where he had trained such as France, Romania, Philippines for ex, because I had trained with those exact same people in these exact same places in the past. Some of the stuff Christian wrote made me laugh out loud like when he was training with my friend and ex training partner in Montpellier, France, bjj black belt Florent Luccioni, and he quoted Florent as saying: “Man, I fought once against a Polish guy at Lisbon at the Europeans and he was so strong that something must have been wrong! I had to double check that I was not fighting three guys!.” Knowing Florent, this was really funny. Also when he describes his trip in Romania and Moldavia and the way he describes the people, ruined buildings etc It was funny because I live in Eastern Europe and sometimes see things the same way as he does.

I bought the book in a e-book format for just 9 euros through Christian’s website and I read it on my I-Phone which is really easy to do. This book is a great read about adventure, friendship and espcially about Jiu-Jitsu! 10/10

Click here to buy the book from Amazon, iBooks or Kobo