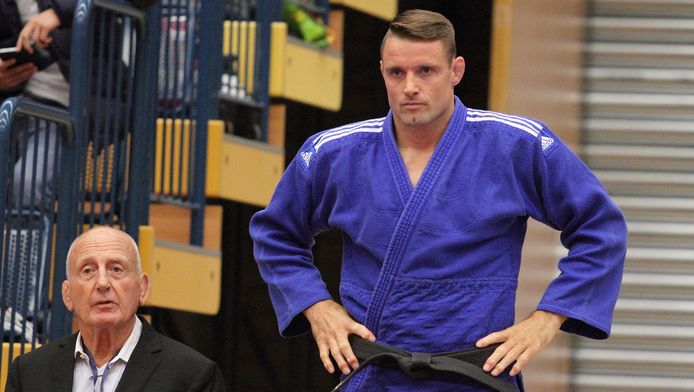 in Judo, the ground game (Newaza) is given less attention than in BJJ. That doesn’t mean that Judokas are not good on the ground. There are many Judokas that have amazing Newaza and would do very well if they transitioned to BJJ. It can be argued that BJJ and Judo are the same sport (BJJ actually came from old style Judo), but a different set of rules is what makes them different.

Mark Huizinga  is an Olympic champion and 5 times European champion. He won the gold medal in the men’s under 90 kg class at the 2000 Summer Olympics by defeating Brazil’s Carlos Honorato by ippon. He took bronze at the 1996 and 2004 Summer Olympics. Other laurels include five European Championships and a bronze medal at the 2005 World Judo Championships. Huizinga retired after the 2008 Olympics.

Huizinga is known in Judo for his superior Newaza and is credited for the ‘Huizinga roll’ aka the reverse omoplata in BJJ. Huizinga is part of the list of top 14 Judokas with the best ground game. 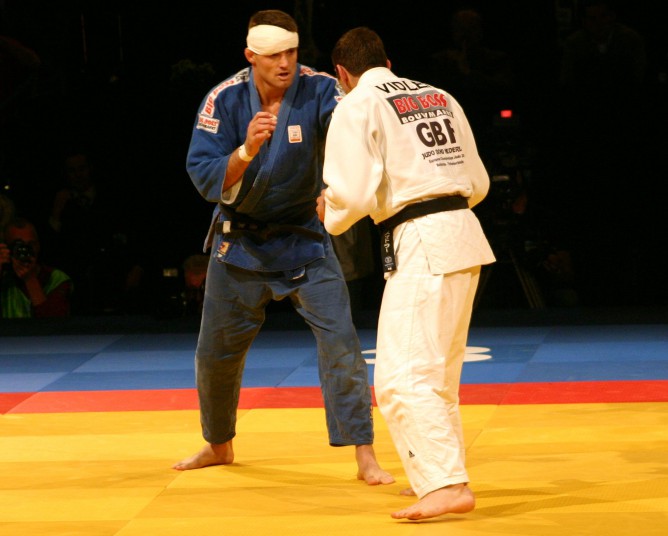 After his Judo career was over, Huizinga stayed in shape by training some BJJ in Rotterdam and being the eternal competitor that he is, he decided to step out of his comfort zone and to test himself in a local BJJ competition on May 6, 2012, the Holland Gi Challenge. He registered in the advanced division (purple to black) and had three matches.

There were 5 people in his weight class and in the first match, he faced the BJJ black belt Brazilian Mauricio Cristo who was a world champion at brown belt. Cristo is famous for his guard game and specially his spider guard. He gave Huizinga a hard time and beat him 8-0.

In his second match, Huizinga faced the brown belt Roslav Senger from Poland. He was able to dominate him and submitted by a sankaku jime, Judo style reverse triangle. Huizinga came third in his 94,3kgs weight class. 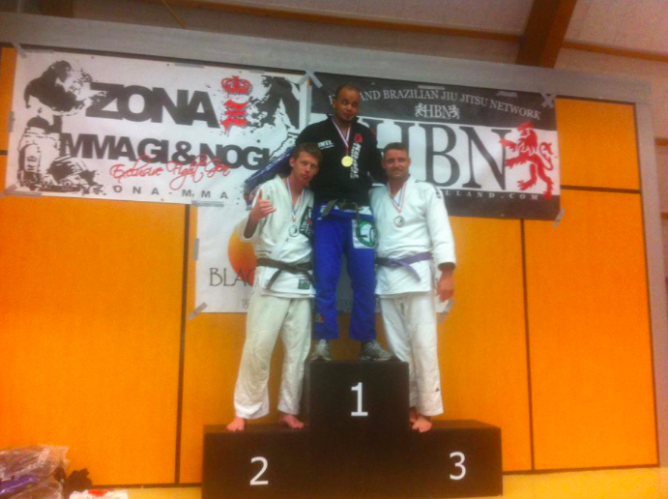 Huizinga being a good sport, wanted to get as much experience as possible and registered for the open class. He faced the very dangerous dutch brown belt Willem Peters who was able to get the submission after taking his back.

You can watch the Huizinga-Peters match:

Huizinga wrote about the experience (google translated from Dutch) and was humble. He admitted that he didn’t know much about the rules and also made some mistakes like giving up his bad waiting for ‘Mate’ like in Judo:

TODAY PARTICIPATED IN A TOURNAMENT BJJ (BRAZILIAN JIU-JITSU). THAT SEEMS UNDER JUDO WITH SOME DIFFERENT RULES AND SCORING. VERY OCCASIONALLY I DO A BJJ TRAINING AND I WANTED TO SEE HOW FAR I’D COME WITH MY JUDO BACKGROUND. MY GAME INSIGHT? I HAD NOT. KNOWLEDGE OF THE RULES? ONLY HEARSAY. MY TACTIC? JUST GET STARTED AND TRY TO TICK OFF SOMEONE.

I ONLY HAD FIVE MEMBERS IN MY POOL (PURPLE BELT AND ABOVE), I WAS IMMEDIATELY IN THE SEMIFINALS AGAINST THE BRAZILIAN MAURICIO CRISTO, APPARENTLY WORLD-AT-THE-BROWN BANDS. HE HAD A DISTINCT FIGHTING STYLE, I HAD LITTLE TO OFFER. NOTHING MUCH HAPPENED IN MY JUDO EXPERIENCE (NOT A HOLD, CLAMP OR STRANGULATION), BUT HE GLEANED MUCH AS 8 POINTS TOGETHER. I ACTUALLY DO NOT KNOW HOW TO DOT I HAVE YET TO LEARN. BUT HE WAS THE DESERVED WINNER, I COULD NOT BRING HIM INTO TROUBLE. LOSS ON POINTS.

I THEN GOT STRAIGHT TO BRONZE AGAINST RADOSLAW SENGER, A POLE WITH A BROWN BELT. THIS WAS MORE LIKE A GROUND JUDO PARTY QUITE EARLY AND I GOT HIM IN A SANKAKU. HE WAS TIGHT CLAMP AND NEVER MOVED AGAIN. THE REFEREE STEPPED IN AND CALLED ME AS A WINNER. BRONZE.

TWO PARTIES I FOUND LITTLE, SO I SIGNED UP FOR THE OPEN CLASS. IN IT, I WAS AT A DUTCH BROWN BELT, WILLIAM PETERS. I FEEL IT WENT WELL, WE WERE VERY ACTIVE PROCESS. STILL, I ALREADY HAD ONE BACK AGAIN 6 POINTS INCURRED BY CERTAIN MOVEMENTS. HE TRIED A STRANGULATION AND I SAW LITTLE DANGER IN MY JACKET WAS STILL ON MY FACE. THAT MAY NOT JUDO BUT IN BJJ! SWEET POOPIE, SINCE I HAD COME TRUE! I WENT OUT TO GET ‘MATE’. A JUDO REFLEX, BUT BJJ GOES SIMPLY BY COURSE. NO ESCAPE WAS POSSIBLE, I HAD TO TICK OFF. LOST.

IT WAS A BEAUTIFUL DAY! SMALL, VERY PLEASANT ATMOSPHERE AND GOOD PARTICIPANTS. I WANTED TO EXPERIENCE WHAT ONCE WAS SUCH A TOURNAMENT AND HOW MY JUDO RELATES TO THE GAME OF THE BJJ GUYS. I AM GLAD THAT I CAN MEASURE MYSELF WITH GOOD OPPONENTS. I WOULD LIKE TO WIN MORE PARTIES, BUT MY OPPONENTS COURSE KNOW BETTER HOW TO USE THE SPECIFIC RULES AND SCORING OF THEIR SPORT. IT WAS A FUN TRIP!