Suplex City! The Incredible Story Behind The Greatest Throw in Wrestling History 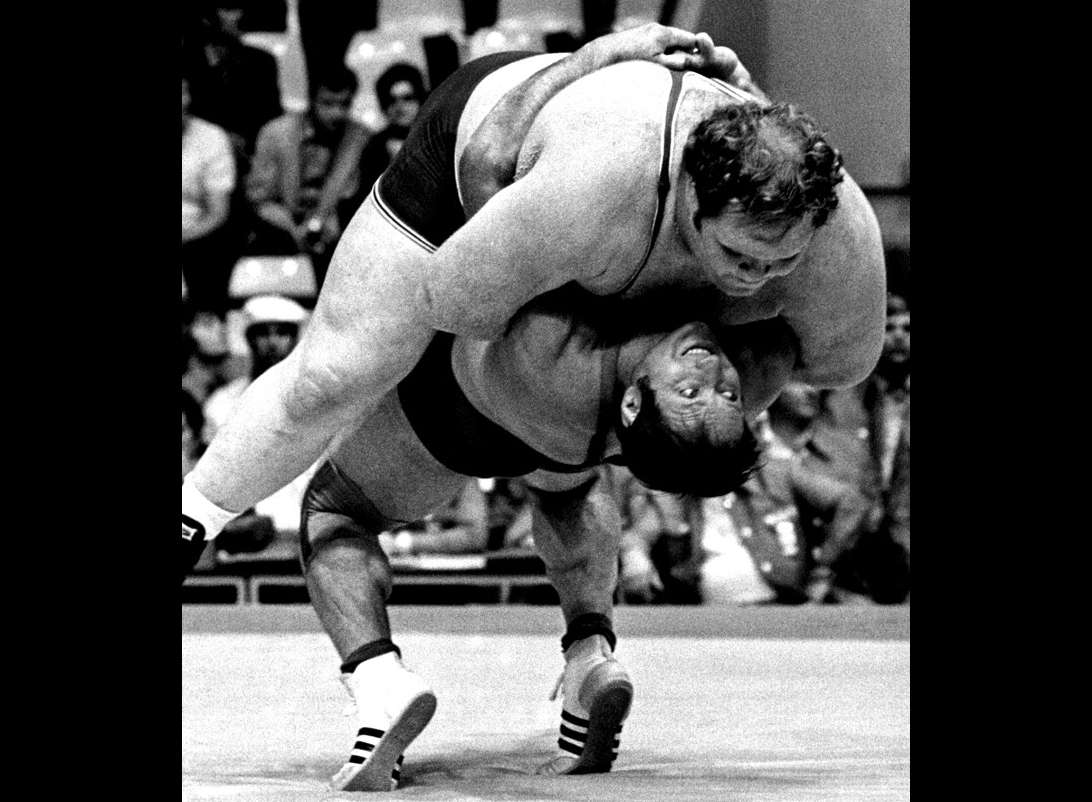 It is without question the most talked about photograph and probably the greatest throw in Wrestling history.

The throw occurred at the 1972 Olympics during the Greco-Roman portion of the Games. Chris Taylor (198 kgs) represented the United States at super heavyweight in both the Greco-Roman and freestyle competitions.

Wilfried Dietrich, between 1956 and 1972, took part in five Olympics and six world championships, often entering both the freestyle and Greco-Roman wrestling contests – a feat unmatched by any other wrestler. He won five Olympic and five world championship medals, becoming Olympic (1960), world (1961) and European champion (1967). Between 1955 and 1962 he won all his freestyle bouts.

Dietrich did not win a medal at his last Olympics in 1972. Yet he produced his most spectacular win by throwing over his back the 198 kg American Chris Taylor in the Greco-Roman contest. Dietrich lost to Taylor in their freestyle bout. In 2008 he was inducted into the Germany’s Sports Hall of Fame. Legend has it that Dietrich hugged Taylor before the match to check if he could clasp his hands behind the giant American’s back.

fightingarts.com talked about the the infamous ‘hug’:

The most famous and talked about part of this story is when Dietrich supposedly came up to give Taylor a hug to check if he could lock his hands around him to see if the throw was conceivable. Some accounts have Dietrich testing Taylor out in the United States during a wrestling tour, while others have the scene taking place at the Olympic Village or at the weigh-ins during the Olympics.
Finding the truth in this Taylor-hugging meeting would be difficult at best. I tracked down six members of the 1972 Olympic team, attempting to clear things up. But in the process, the picture became less clear. After hours of phone calls, I was ready to buy into the theory of J Robinson, the 180.5-pound Greco teammate in 1972 and current University of Minnesota coach, that the story was pure conjecture and that this great moment in sport was just a fraud.
Everyone I talked to kept referring me to the person they heard the story from so I was beginning to wonder if the whole thing was just made up.
“It doesn’t matter where it took place,” Dan Gable told me. “All you need to know is that Dietrich locked his arms around Taylor to see if he could get his arms around him for the throw.”
Sorry Dan, but that answer isn’t going to cut it. Like Babe Ruth calling his shot, I had to know if there was any truth behind this legend. Finally, after being kicked around like a soccer ball, I was referred to someone who could make sense of all this madness.
“I was about four feet away when it happened,” said Jim Peckham, assistant coach of the freestyle team. “It was about five to ten minutes before their match (Peckham wasn’t sure if it was the Greco-Roman match or the freestyle match) and Dietrich came up to Chris and said ‘Chris, it’s so good to see you.’ Instead of a handshake, he gave him a big hug. I tried to step in to stop it but was too late. I think he was doing it to see if he could get his arms around Chris to attempt a throw. Keep in mind, the match was in Germany and this was Dietrich’s home mat, so he was trying to gain every advantage possible.”
So was Dietrich trying to gain an advantage by giving Chris Taylor a hug? I hope so. It makes the story a lot more entertaining.

Dietrich threw Taylor with suplex/souplay but the move was controversial. It has been argued that Dietrich fell on both shoulders and effectively pinned himself.