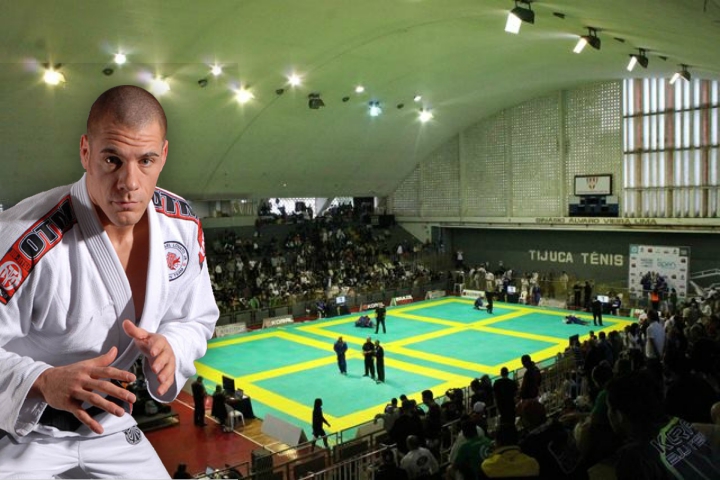 Rafael Lovato Jr. is the current Bellator Middleweight champion, a 3 x world BJJ champion (1 x in Gi and 2 x in No Gi) and is the second American (B.J. Penn being the first) to win the WorldJiu-Jitsu Championship (in 2007) as a black belt.

Rafael is a black belt under Carlos Machado, the oldest of the Machado family.  Rafael has had a long and formative training history with Xande and Saulo Ribeiro, one which began after he competed against Saulo in the finals of the 2003 Arnold Classic, when Rafael was just 19 years old.

Rafael currently manages his own academy in Oklahoma City, Oklahoma.

Rafael recently made a parody video where he compares the attitude between the current Adult World sand the master worlds that went viral.

In this newer video, he talks about his time competing in Brazil at the Tijuca Tennis Club in Rio de Janeiro. In 2007, the Worlds moved to the United States, but the mystique remains in the old gym.

He said in an interview with tatame:

“The Tijuca is like the La Bombonera (stadium of Argentine football club, Boca juniors) , we stay close to the fighting area. The gym is closed, has flying pigeon (laughs) and has a whole story. Who has been in this sport since the beginning knows what I’m talking about. When we go to the United States we do not feel this vibration, this joy. I feel that people are sad to not have some big international championship here in Brazil. We do not see anyone at elite level fighting here anymore. That’s sad. There were many battles against good people too, such as Fabio Gurgel, Roleta, Murilo Bustamante . I have over 70 fights only at black belt in Tijuca. I always remember when I got hurt in ’99, against Givanildo to the time that I ‘retired’ in a fight against Roger (Gracie) and gave my belt to him. Another moment was when I lost my unbeaten record, to Margarida, “he said.