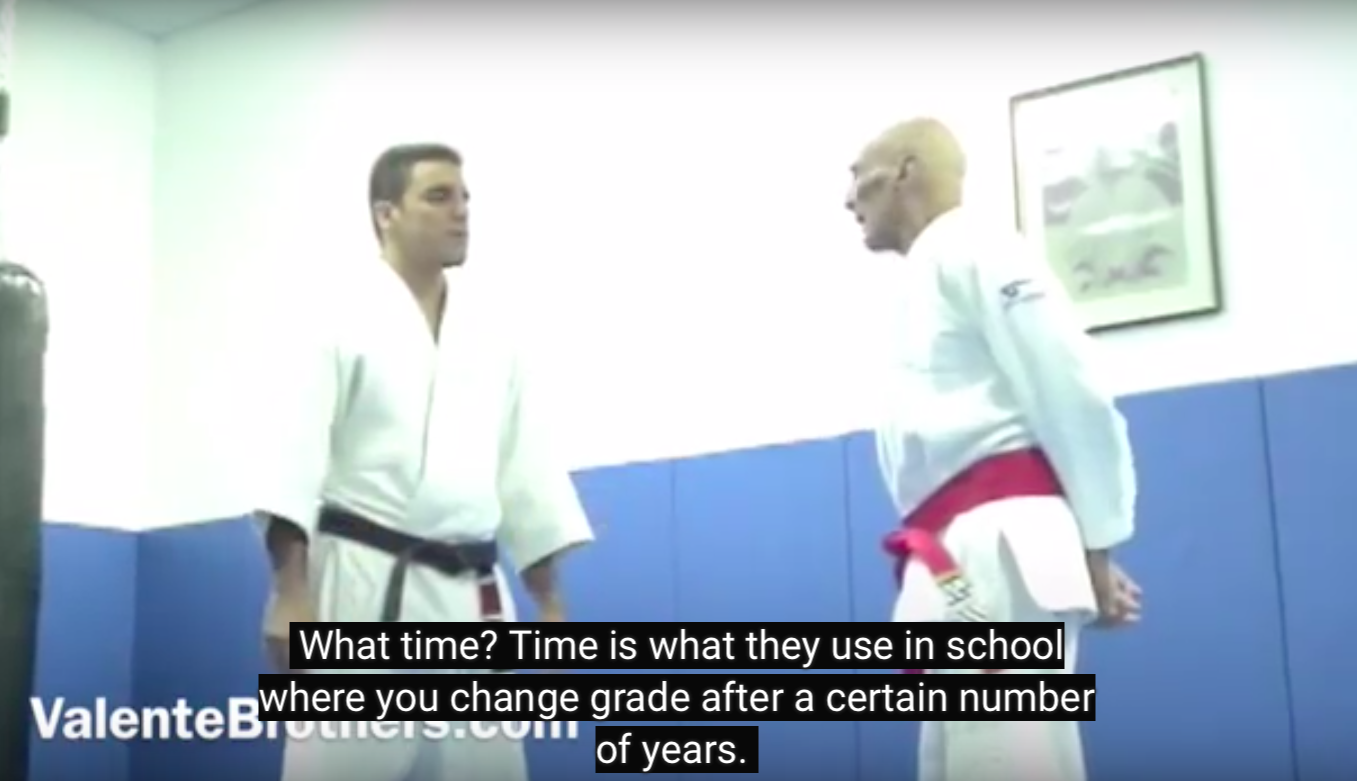 In an exclusive and never seen before conversation with his disciples, the Valente Brothers, Grandmaster Helio Gracie discusses the jiu-jitsu belt system, the attribution of degrees on the black belt and should competition success be taken into consideration:

Helio Gracie, looking at Pedro Valente:
I think you deserve it. That’s it. You don’t have to explain anything. You don’t owe anyone an explanation.
I give degrees according to the person’s efficiency. I don’t have a timeline to give degrees.

Pedro Valente:
It’s not by time?

Helio:
What time? Time is what they use in school where you change grade after a certain number of years.
Someone who is brilliant, an intelligent person who develops quicker than another will have to stay neck and neck and wait for the other because the other doesn’t develop?
You guys have the competence to have these degrees and even more if I want to award it.
I don’t award more because for me degrees and rubbish are the same thing.
You are the one who makes your degree. What’s my degree?
This junk that is painted on my belt?
In Rio I’m a blue belt.
I don’t have any degrees. So what!
How come no one criticizes me?
This degree thing is not worth anything. It is only an orientation that I have for my use.
I think you deserve it because you are an excellent teacher, teaching excellent classes
You deserve it.
Degrees represent teaching skills not fighting skills.
Fighters don’t have degrees, they have a time.
I was the best fighter in the world, now I’m nothing, and so what?
I wouldn’t be able to have fighter’s degrees anymore.

Pedro Valente:
So degrees on the belt are for technique?

Helio Gracie:
Yes! My belt rank is as a jiu-jitsu teacher.

Few published guidelines or standards determine when a practitioner is ready for promotion; the criterion is generally determined by individual instructors and/or academies.The IBJJF maintains an extensive graduation system that takes into account time-in-grade and membership standing, but makes no mention of specific performance or skill requirements. When instructors or academies comment on the criteria for promotion, the most widely accepted measures are the amount of technical and conceptual knowledge a practitioner can demonstrate, and performance in grappling (randori) within the academy and/or competition.

Technical and conceptual knowledge are judged by the number of techniques a student can perform, and the level of skill with which they are performed in live grappling, allowing smaller and older practitioners to be recognized for their knowledge, although they may not be the strongest fighters in the school. Brazilian jiu-jitsu is a distinctly individual sport, and practitioners are encouraged to adapt the techniques to their body type, strategic preferences, and level of athleticism. The ultimate criterion for promotion is the ability to execute the techniques successfully, rather than strict stylistic compliance.

From Helio Gracie’s son, red belt Relson Gracie about the traditional belt system of Gracie Jiu-Jitsu, from this article:

With all his knowledge, he always found it important to show all through the art of Jiu Jitsu a good behavior and also as form of religon. Many great things we have learned with him throughout the years. In and out of the mat.

One of then was about the Gi’s. He always thought that the right for them should be white. He never used the color black, blue or even another.
With the belts, as a teacher, among his 20 to 50 years he always wore the navy blue belt and his students all wore white belts. Him as well as Carlos Gracie, never wore the black and red/black belts. Changed from navy blue belts straight to red belt – Grand Master. Between the years of 1961 and 1962 Helio Gracie created the solid colors scheme on the belts. One of the main reason why he likes the white Gi’s.
For people/students under 16 years of age, the colors are white, yellow, orange and green. For people/students over 16 years of age, the colors are white, blue, purple, brown and black. Once earning the black belt, after 20 years of teaching Helio Gracie Jiu Jitsu, you would then change to the red/black belt. Another 20 additional years of teaching it, you would then achive the red belt known as the Grand Master.

This system of solid colors in the belts was created to separate the levels of students in class and competitions. Also, to differentiate from the martial arts of Judo, Helio create for his belts system the 10 cm long band to be installed at one end of the belt and its stripes. For the yellow, orange, green, blue, purple and brown belts, to use a black color band. For the black belt only, a red color band. For the students under 16years of age, 3 stripes and for the ones over 16 years of age, 4 stripes. He did not use the black band and stripes on the white belts. And I have always wanted to follow his system.
At my association however, some instructors promote the black band and stripes at the white belts to incentive the students and I did not oppose to their idea.
Along with many orher items that will be available at our site, we are now producing all the belts with bands and the RG patches in it. It would make me very proud to have all my associations and students using my belts.
Giving continuity to the best system established by my father, I would like to take this opportunity to ask you all to mantain Helio Gracie desire of using the white color Gi’s at each school. To maintain his original rules of Gracie Jiu Jitsu, loyalty and respect to his system. I want to pass on all his and my Jiu Jitsu knowledge and respect to you all.