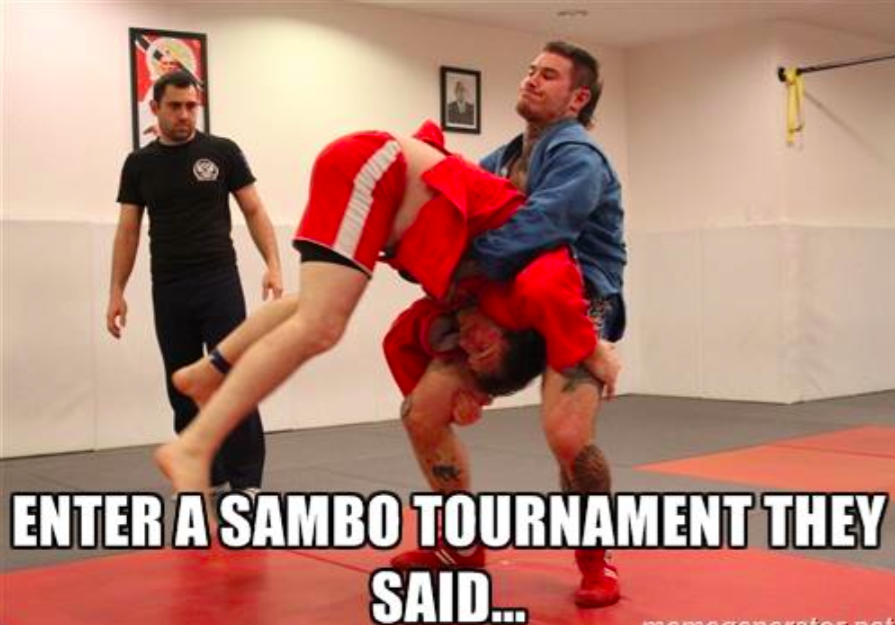 Athletes from the Bay Jiu Jitsu Sambo team and the Bay Area Combat Sambo team get some rounds in at a friendly sambo tournament and pizza party!

Many of these athletes cross train weekly in sambo, bjj, and submission wrestling, and several have backgrounds in other combat sports as well. This event highlights the fun and explosive sport of sambo, and the benefits of cross-training.

There are 2 recognized competitive sport variations of Sambo:

-Sport Sambo (Russian: Борьбa Самбо, Bor’ba Sambo, Sambo Wrestling (eng)) is stylistically similar to Olympic Freestyle Wrestling or Judo, but with some differences in rules, protocol, and uniform. For example, in contrast with judo, Sambo allows some types of leg locks, while not allowing chokeholds. It focuses on throwing, ground work and submissions, with (compared to Judo) very few restrictions on gripping and holds.
-Combat Sambo (Russian: Боевое Самбо, Boyevoye Sambo). Utilized and developed for the military, Combat Sambo resembles modern mixed martial arts, including extensive forms of striking and grappling where (unlike Sport Sambo) choking and bent joint locks are legal. Competitors wear jackets as in sport sambo, but also hand protection and sometimes shin and head protection. The first FIAS World Combat Sambo Championships were held in 2001.