Can You Go Straight To The Ground In Judo? 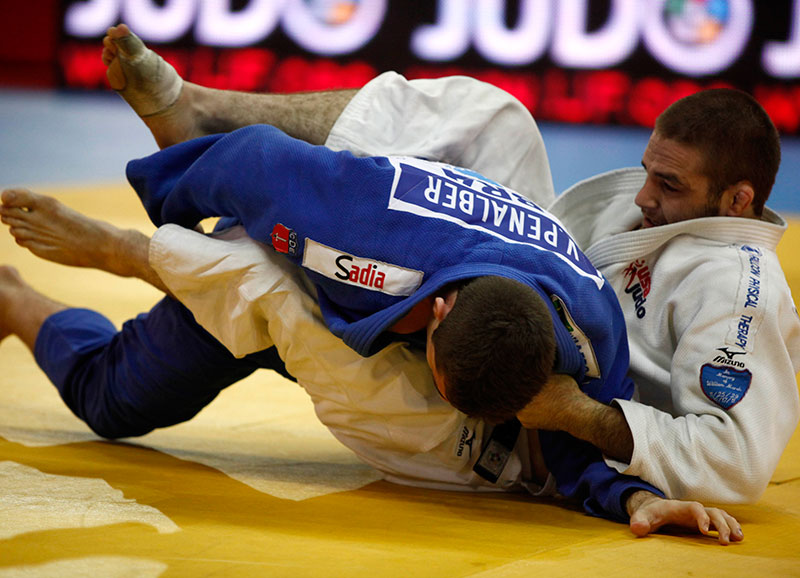 In Judo, there are 4 ways to get an ippon and end the match:

If you notice, 3 out of 4 ways are on the ground which means that Newaza (groundwork) is very important in Judo.

So can you bring the match to the ground without actually having to throw your opponent?

As long are you’re not flopping to the ground and stalling, then yes. The action has to be continuous and you have to be actively working for a submission. As soon as the action starts to slow down the referee will stand you up.

From the official rulebook of the International Judo Federation, page 27 (PDF):

ARTICLE 16 – Entry into Newaza
1. The contestants shall be able change from Tachi-waza to Newaza as far as it is done by one of the cases referred to in this Article. However, if the technique used is not continuous, the Referee shall announce Mate and order both contestants to resume the fight from the standing position.
2. Situations that allow the passage from Tachi-waza to Newaza
a) When a contestant, after obtaining some result by a throwing technique changes without interruption into Newaza and takes the offensive.
b) When one of the contestants falls to the ground, following the unsuccessful application of a throwing technique the other may take advantage of his opponent’s position to take him to the ground.
c) When one contestant obtains some considerable effect by applying a Shime-waza or Kansetsu-waza in the standing position and then changes without interruption to Newaza.
d) When one contestant takes his opponent down into Newaza by the particularly skillful application of a movement which does not qualify as a throwing technique.
e) In any other case where one contestant falls down or is about to fall down, not covered by the preceding sub-sections of this article, the other contestant may take advantage of his opponent’s unbalanced position to go into Newaza.
3. Exceptions
When one contestant pulls his opponent down into Newaza not in accordance with Article 16 paragraph 2 and his opponent does not take advantage of this to continue into Newaza, the Referee shall announce Mate, and penalise with Shido the contestant who has infringed Article 25.7.
If the opponent takes advantage of the action of Tori, the Newaza work may continue.

The transition between Tachi-Waza (standing techniques) and Ne-Waza is very important . This is a small window of opportunity where you can capitalise on the moment and catch your opponent. This is a speciality of high level Judokas and Sambo players.
A perfect example of a Judo player that had mastered the transition game in Judo is Olympic bronze medalist Flavio Canto of Brazil. As soon as he would throw his opponent, he would make them fall in a way where he would already be setting up his submission on the ground. Canto is also a black belt in BJJ.

Olympians Matt D’Aquino and Ivo Dos Santos in their new instructional Judo Transitions show you the best and most effective transitions.

Check out this video of Matt teaching the Quick Kills: some aggressive tachi waza (standing) to ne waza (ground) transitions.