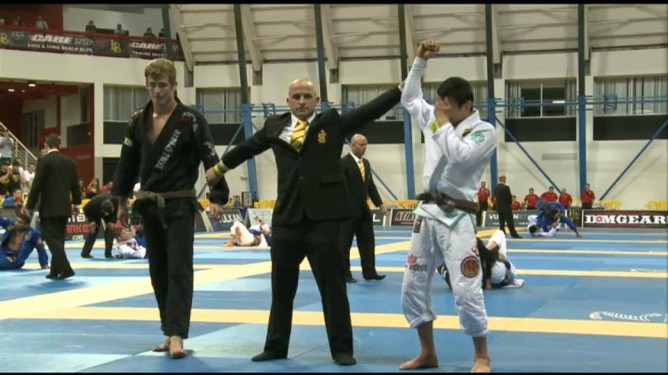 There are few men as unique and different in their approach to Brazilian Jiu Jitsu as the young brown belt, Keenan Cornelius.  The master of everything inverted, Cornelius always proves to be an interesting spectacle to say the very least.

As he made his way through the ranks at the 2013 World Championships, he crossed paths with Paulo Miyao in the open class final.

With a storied past between the two, to the untrained eye, this was just two up-and-comers waging war for the top spot.  To the diehard Brazilian Jiu Jitsu community, this was much, much more than that.  This was a chance for redemption for Miyao.

For a better part of this match, both Cornelius and Miyao waged war by attacking one another’s feet.  Knowing that it doesn’t take much—just the right opening an correct amount of pressure—the two men pursued leg locks in hopes to end this match.

The one thing that stood out to me was that Miyao was very willing to engage in an inverted guard battle.  Cornelius is known for his unique inverted attack, that leave many people having fits when trying to pass his guard.

So seeing someone willingly attack from this position against Keenan was a refreshing site to see, to say the very least.

As the match went on, it became clear that the favorite—Cornelius—was starting to look more and more like the one with his back against the wall.  Glancing towards the clock, it was evident that Keenan was well aware of this.

Showing no sign of stopping, Paulo remained relentless and maintained an aggressive approach.  Not allowing Keenan to find his rhythm, Miyao went on to have his hand raised in victory.

More Than Just A Medal

As I stated earlier, this wasn’t the first meeting between the two.  In fact, this was their sixth showdown!

In their prior meetings, Keenan reigned supreme in four of them, asserting himself atop the “must watch” list.  In another showdown, both men were DQ’d, leading to a draw.  History didn’t bode well for Miyao, who entered the match with a 0-4-1 record against Keenan.

Winning this match was clearly a crowning moment for Paulo.  Sure, winning the medal at the Worlds is a big deal, but now he can finally say he got the better of his rival, Keenan Cornelius.  The emotion was captured on camera after the match, as we can see Miyao breakdown on the mat as the buzzer sounded.

That’s the beauty of sports; sometimes winning means so much more than being the better man.  It can show you that what was once an impossible mountain to topple, is nothing but an ant hill now.  As the saying goes, everyday a star is born. Check out Keenan’s technique in this match and the full break down here at the Science of Skill.