A Slick Armbar Setup From Back Mount! 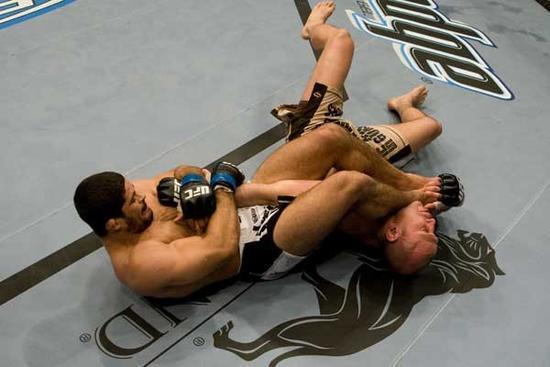 Dan Faggella is a No Gi Pan Am champion and recognized leg lock expert. To get his whole breakdown of Rousimar Palhares’ leg locks for free please visit BJJLegLocks.com/Mastery

In Brazilian Jiu Jitsu, there are many ways you can hit certain submissions.  With an almost endless array of options, it’s always good to continue evolving your approach in order to become a more sound, lethal grappler.

Now, we all know the basic ways we can go about hitting a slick armbar to get the victory, but what if they aren’t working?  What if we don’t have the chance to get in these desired positions to hit the move?  Don’t worry, there’s always a way to find the armbar.

In this scenario, we’ll take a look at a technique I broke down while hosting our UFC Moves Made Easy at Black Diamond MMA.  In this specific technique, I take a closer look at how Rousimar Palhares went about finishing one of his most infamous fights.

Attacking The Submission From Back Mount

While it may not be the traditional way of going about this move, grapplers are more than able to apply a lethal armbar from back mount.  Rousimar showed this was possible, and in interesting fashion.

Known for his brutal leg locks, Palhares was not able to find the opening he wanted to end the match with a heel hook or a toe hold.  Rather, his opponent chose to shoot on Rousimar, looking for the takedown.

Being able to stuff the shot, Palhares eventually turtuled his opponent, and took his back.  Sinking the hooks in and applying his over/under hold, there was no way Palhares was giving this position up.

Unable to sink in a rear naked choke, Rousimar knew he had to go about it in a different manner in order to finish the fight.

Taking his far hand, Rousimar did a swim move over his opponents head, and locked onto the opposite arm with a kimura grip.  Using the same-side leg, he brought it across his opponent’s body.  Bumping outwards with his hips, he was then able to swing his other leg over the top.

Bringing his leg over his opponent and dropping down to the mat, Palhares was able to pop his hips upwards, creating pressure on the elbow joint, gaining the submission victory and in impressive fashion. Rousimar has many exciting submission victories in his professional mma carreer and a full breakdown of career is here on UFC.com.

As you likely know, while grappling, the back mount isn’t directly tied to the armbar.  When you see this position obtained, the first thought is to attack—or protect, depending on your situation—the neck with an emphasis on the rear naked choke.

Rousimar did just that, but once he saw it wasn’t there, he knew something had to happen and fast.  Hitting the armbar from the back mount can be difficult as it calls for a good range of motion in the hips, but it’s super effective.

The hold itself is enough to get the tap, but your opponent is likely not expecting it from this position, which adds to the dangers of the move! Rousimar is also known as a deadly leg lock expert, GracieMag.com talks about why he is so successful with leg locks in their article here.

So take a look at the video, break it down, and get to drilling!